New domain registration has slowed, according to new data from VeriSign, which cites erosion in ad support for domain "parking" businesses. 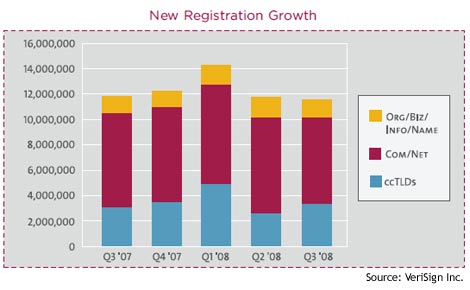 If you're one of those people that's annoyed by all those ad-packed domain "parking pages," you may be seeing fewer of them in the future. Domain monetization is becoming more difficult as ad payouts decline, which is translating into a slowdown in new domain registration.

VeriSign said yesterday that 11.5 million new domains were registered in the third quarter of 2008, a decline of 2 percent from the previous quarter and well off the high of 14 million in the first quarter of 2008. The renewal rate for existing domains slipped to 72 percent, down 1 percent from the second quarter and down from the high-water mark of 77 percent seen in late 2006.

The data was included in VeriSign's quarterly Domain Name Industry Brief (PDF), which cited the tightening of ad policies at Google as a factor. "The number of new .com and .net domain names registered with the intent of generating online advertising revenue saw pronounced weakness again in third quarter due in part to changes in Google’s AdSense program and lower spending trends in Internet advertising," VeriSign noted in its analysis.

The domain advertising industry experienced huge growth in recent years due to speculative domain buying and moves by registrars and web hosts to display pay-per-click (PPC) advertising instead of house ads. The "domaining" boom boosted the fortunes of registrars, as well as central registries like VeriSign, which maintains the .com and .net top-level domains. But the parking boom irked many Internet users, who grew weary of encountering the ad-filled pages when they mistyped a domain name.

Domain professionals often switch between different domain parking services seeking higher payouts. But the recent decline in PPC rates has muddied those distinctions, according to Leonard Holmes, who tracks parking rates at his Name Monetizer newsletter.

"By now it is obvious that income is down from PPC parking companies," Holmes wrote in his December newsletter. "It is also becoming more difficult to track which companies are paying the best, because comparing this month's revenue to last month's revenue almost always results in a decrease - whether domains are switched to different companies or not."