A Swedish ISP has built an amazing underground data center in a former nuclear bunker below Stockholm. The CEO modeled it on a Bond villain's secret lair. 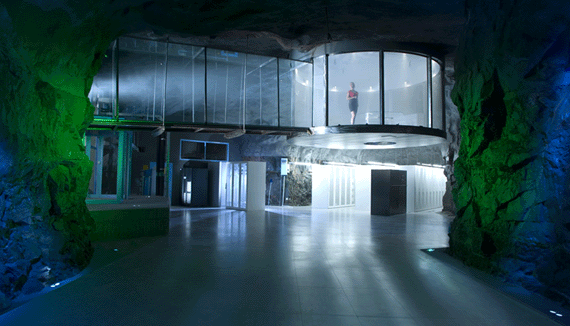 This data center was built in a former underground nuclear bunker in Stockholm, Sweden.

Today Pingdom provides a glimpse inside an amazing new data bunker in Sweden run by Bahnhof, a large ISP.  It's based in a former nuclear bunker below Stockholm, with 16-inch thick blast doors.

"This underground data center has greenhouses, waterfalls, German submarine engines, simulated daylight and can withstand a hit from a hydrogen bomb," Pingdom notes. "It looks like the secret HQ of a James Bond villain."

This is one of the most visually striking data centers I've ever seen. I'm not sure about all the fog and waterfalls, which I gather are separate from the equipment area. There's also a 2,600-liter salt water fish tank.

Pingdom also has an interview with Jon Karlung, the CEO at Bahnhof, about the unusual design for the data center.

“I’m personally a big fan of old science fiction movies," said Karlung. "Especially ones from the 70s like Logan’s Run, Silent Running, Star Wars (especially The Empire Strikes Back) so these were an influence,“ said Karlung. “James Bond movies have also had an impact on the design. I was actually looking for the same outfit as the villain ‘Blofeld’ in Bond and even considered getting a white cat, but that might have been going a bit far!”