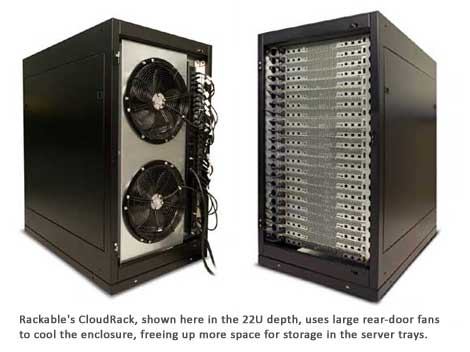 The shift to the cloud is driving changes in data center design. Now it's also driving changes in rack design. Rather than shipping individual servers for "rack and stack" installation, many cloud-builders now have servers pre-populated in racks, which are then shipped as a unit and rolled into place on the data center floor.

Rackable Systems (RACK) has designed its new CloudRack with these customers in mind, approaching the rack as the form factor, rather than the server. CloudRack's server trays have no cover and no fans, using larger fans in the rear door of the rack to cool the equipment. The additional space is used primarily for storage, with up to eight 3.5 inch drives per tray.

This approach allows a 44U CloudRack cabinet to support 44 trays, 704 cores and up to 352 terabytes of storage, according to Rackable president and CEO Mark Barrenechea. CloudRack is available in pre-configured configurations, or in build-to-order configurations supporting a wide variety of Intel and AMD server boards.

"We're taking a very innovative 'rack-centric' design," said Saeed Atashie, Director of Server Products for Rackable. "We basically use all of the real estate to provide density. Instead of using small, noisy fans inside the servers, we've centralized a common cooling infrastructure with large axial fans at the rear of the rack."

CloudRack comes with two rear fans for the 22U version and four for the 44U version. Atashie says the larger fans are more reliable than a larger number of smaller fans.

Rackable launches CloudRack as the market for cloud computing hardware is becoming intensely competitive. Rackable and Verari Systems were early specialists in this niche, while IBM, Dell and HP have recently introduced servers tailored for “scale out” cloud platforms. Earlier this week Dell said its Data Center Solutions division is providing the servers and storage powering Windows Azure, Microsoft’s cloud services platform. Microsoft has historically been among Rackable's largest customers.

CloudRack represents Rackable's latest effort to support cloud builders with specialized products offering both extreme density and configurability.  Atashie says CloudRack's features are guided by the need to design for clients with a "rack 'em and roll 'em" requirement, which saves time and packaging for companies buying in bulk for cloud platforms.

"A lot of our competitors take a standard box with a server-centric approach and try to fit it into cloud computing," said Atashie. "Our server tray is not a general purpose server. CloudRack is an integrated product that is fine-tuned for cloud computing."