Microsoft (MSFT) recently allowed the BBC to film inside its data center in Quincy, Washington. Here's what they found. 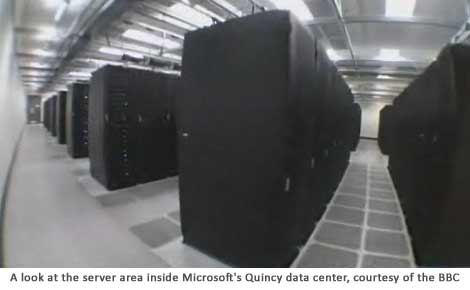 You're unlikely to ever see the inside of a Google data center. But not so for Microsoft, which recently allowed the BBC to film inside its data center in Quincy, Washington. The BBC's Rory Cellan-Jones provides a brief video tour of the 470,000 square foot facility in central Washington state, which houses the equipment powering Microsoft's new Windows Azure cloud developer platform.

The video, which runs about 3 minutes, provides brief glimpses of the battery room, chillers and server space. Cellan-Jones also interviews Mike Manos, general manager of Global Foundation Services for Microsoft, who reveals to Rory that the facility can store eleventy gajillion photos. OK, the real number is 3.7 trillion photos. Either way, that's some serious storage. (Link via Dave Ohara).