Microsoft says its testing shows that the data center containers it is installing in its new Chicago data center can deliver a Power Usage Effectiveness (PUE) energy efficiency rating of 1.22. 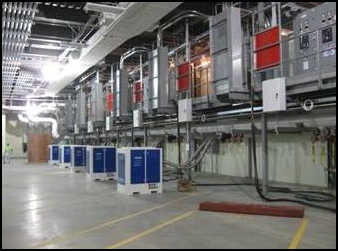 Microsoft says its testing shows that the data center containers it is installing in its new Chicago data center are extraordinarily energy efficient. The 40-foot shipping containers packed with servers can deliver a Power Usage Effectiveness (PUE) energy efficiency rating of 1.22, which rivals recent PUEs reported by Google. Microsoft's Mike Manos revealed the PUE numbers in a blog post about the Chicago data center, which has just completed its first phase of construction.

"The facility is already simply amazing and it’s a wonder to behold," Manos writes of the $550 million, 500,000 square foot facility in Northlake, Illinois. "The joke we use internally is that this is not your mother’s data center.  You get that impression from the first moment you step into the 'hangar bay' on the first floor. The hangar’s first floor (pictured above) will house the container deployments and I can assure you it is like no data center you have ever seen.  It’s one more step to the industrialization of the IT world, or at least the cloud-scale operations space."

The 40-foot CBlox containers can house as many as 2,500 servers, and Manos said they allow Microsoft to achieve a density "10 times the amount of compute in a traditional data center." The company says it will pack between 150 and 220 containers in the first floor of the Chicago site, meaning the massive data center could house between 375,000 and 550,000 servers in the container farm.

It also is helping Microsoft meet its goals for extraordinary energy efficiency. "Now I want to be careful here as the reporting of efficiency numbers can be a dangerous exercise in the blogosphere," Manos writes. "But our testing shows that our containers in Chicago can deliver an average PUE of 1.22 with an AVERAGE ANNUAL PEAK PUE of 1.36. I break these two numbers out separately because there is still some debate (at least in the circles I travel in) on which of these metrics is more meaningful.  Regardless of your position on which is more meaningful, you have to admit those numbers are pretty darn compelling."

That PUE measurement is among the lowest reported, and very close to energy efficiency data recently reported by Google, suggesting that both companies are on  the cutting edge in their efforts to make their data centers as efficient as possible.  Google said Oct. 2 that its six company-built facilities have an average PUE rating of 1.21, and that one facility had reached a PUE of 1.13.

There are key differences between the two data points. Microsoft is citing efficiency data for containers during the testing period prior to installation in the Chicago data center, while Google's numbers are for six working company-built data centers that have been in production for a year.

Signifcantly, containers are playing a role in the low PUE numbers for both companies. Google recently indicated that at least one of the six Google-built data centers “could in fact be a container data center.”

Manos acknowledged that containers have been controversial to some in the industry. "This new approach is definitely a change in how facilities have traditionally been developed, and as a result many people in our industry are intimidated by it," he writes. " But they shouldn’t be. Data centers have not changed in fundamental design for decades.  Sometimes change is good. The exposure to any new idea is always met with resistance, but with a little education things change over time."