Microsoft engineers have run tests in which racks of servers were housed in a tent outdoors, and had no service interruptions. 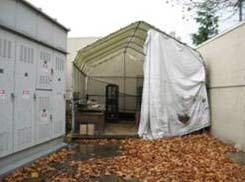 This month we've already had a patent from Google for floating data centers, and a proof-of-concept from Intel for a data center with almost no air conditioning. What's next?

It turns out that Microsoft's Christian Belady and Sean James have run their own outside-the-box proof of concept in which they've run a rack of servers under a tent in the fuel yard for one of the company's data centers. Christian provides some details about the experiment in a blog post at The Power of Software:

Inside the tent, we had five HP DL585s running Sandra from November 2007 to June 2008 and we had ZERO failures or 100% uptime. In the meantime, there have been a few anecdotal incidents:

While few data center managers would be brave enough to submit mission-critical apps to such conditions, the experiment builds on Intel's work in suggesting that sevrers may be hardier than believed, making more room for optimizing cooling set points and other key environmental settings in the server room. Suffice it so say that Microsoft is also on the same page with Intel when it comes to increased use of air-side economizers, which have been incorporated into the design of data centers Microsoft has under construction in Chicago and Dublin.