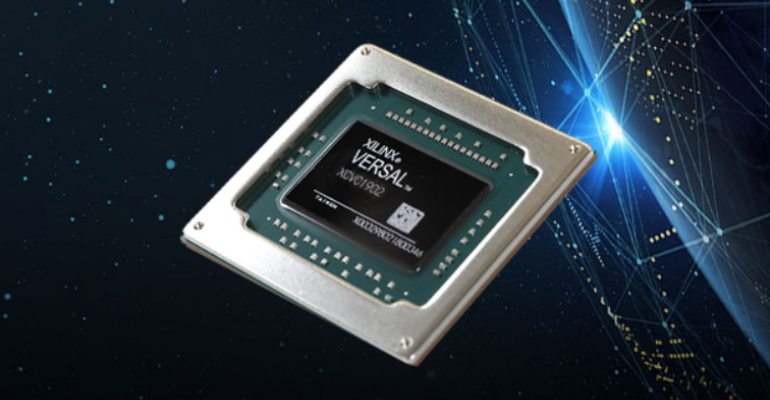 Is Xilinx Stronger with AMD or Without It?

Platform building is a well-known path, but is being part of AMD’s platform better for Xilinx than fleshing out its own already promising one?

At multiple points in its history, Xilinx – which is reportedly in the process of being acquired by AMD for $30 billion – has announced its transition from a mere producer of field-programmable gate array (FPGA) cards into a “platform company.” This is a very old, well-trodden, transition path. Four decades ago, folks were mystified by New Mexico-based MicroSoft Consumer Products’ announcement of a transition from a producer of broadly popular Apple II expansion cards such as the Z-80 SoftCard, into a weirder, more nebulous-sounding “software company.”

For a hardware company to become a platform company in the modern era, its hardware needs to cover a broad enough territory for software (either its own or someone else’s) to convert it into a genuine platform.

You don’t just pile platforms on top of each other, think you’ve made one contiguous platform, and declare yourself a platform company.

The AMD and Xilinx “deal is about the convergence of CPU, GPU, and other accelerators on a system or motherboard,” Kurt Marko, principal analyst at Marko Insights, told us. “FPGAs provide the flexibility to implement a multitude of features that can augment x86 cores by offloading and accelerating particular functions.”

The Xilinx platform is comprised of well-respected programmable logic boards governed by a system-on-a-chip (SoC) called Zynq. A programmable logic board can be an “accelerator,” if you have a system that’s geared to run applications that use the exact same software routines repeatedly, such as AI, video transcoding, or encryption. Rather than rely on a CPU to run these routines in DRAM, an FPGA card may already have those routines stored and running in highly available local memory. 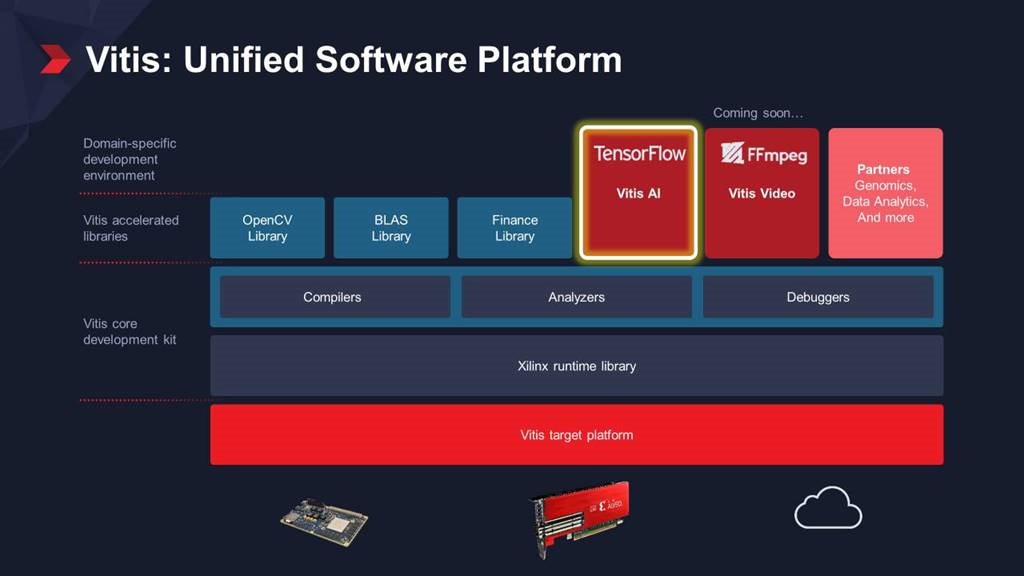 We can dress up this concept with a silk necktie and patent leather shoes, but the true pervasiveness of this kind of acceleration in its native market is best illustrated in this video:

Here, the methodology for deploying a programmable logic workload on a Zynq SoC using Xilinx’ SDK platform, called Vitis, is wonderfully demonstrated by a carousel of grade-school children, who have connected their Diligent Arty Z7 developer board to their laptop with a USB cable. These kids don’t sound any older than 12, and they’re clearly having a blast making their logic kit accessible to C-language input.

“Traditional CPUs are not able to provide the performance scaling required for some of these compute-intensive workloads,” Xilinx senior VP Salil Raje said at this time last year durin the company’s XDF conference in San Jose, the company’s home base.

“That is why domain-specific accelerators are stepping up to take on some of these larger workloads,” he continued. “The issue is, however, that the workloads continue to change. They depend on algorithms and standards that continue to evolve. That is why adaptable devices, such as FPGAs and ACAP [Adaptive Compute Acceleration Platform] devices, have started to gain momentum as adaptable, domain-specific accelerators. They can be customized for your domain, for your application, and they can be configured on the fly.”

ACAP is a name Xilinx has given to what it considers a new class of processor – if that wording rings familiar, it’s because that’s what Nvidia said it would build together with Arm – in which programmable logic, built-in logic (in the form of “digital signal processor” or DSP, engines), Arm Cortex-A72 cores, and programmable networks reside in attached blocks on the same processor. The re-programmable, “adaptable” part are the concept’s selling point. Unlike a traditional ASIC, where an upgrade involves a truck roll, an ACAP would evolve in place. For now, ACAP is being marketed under the umbrella brand Versal. 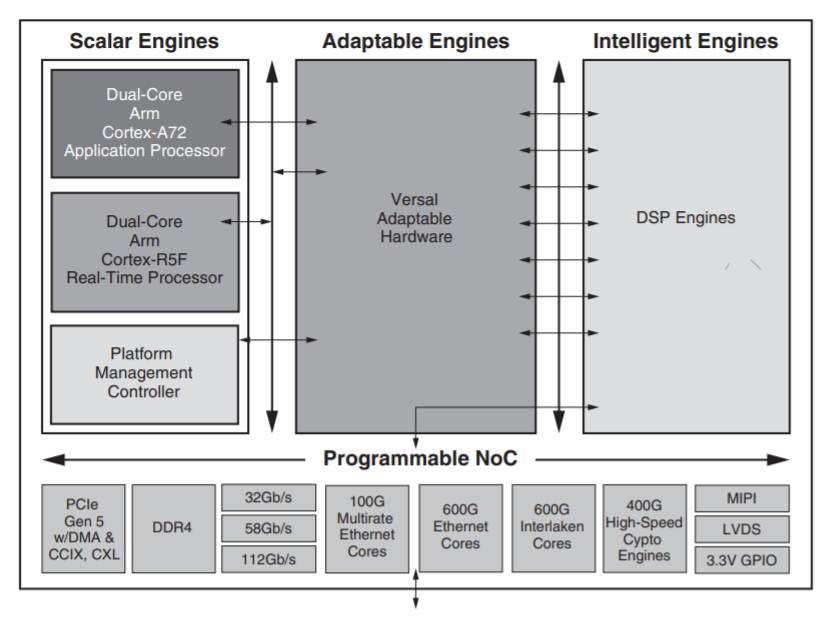 In an introductory document to Versal published last year [PDF], Xilinx makes a case for pursuing ACAP: 5G network core infrastructure – still indeterminate – is expected to attract $8 billion in investment annually by 2024. The chips available in 2019 would not survive the thermal constraints imposed by the environments in which 5G equipment would be deployed.

The money, the incentive, and the use case are all there, the document put forth. And so is the hardware, but what was needed at that point was something called a platform.

“You can have multiple applications running on your architecture,” Rob Armstrong, Xilinx’ director of technical marketing, said at the 2019 conference. “If those applications are not getting the compute efficiency that you need, you can then adapt the architecture to the application. And by having multiple domain-specific architectures that you can run on the same reconfigurable hardware, you can achieve acceleration end-to-end across a wide variety of different algorithms, and a wide variety of workloads.”

It’s the culmination of Xilinx’ original concept, except perhaps it now sounds a bit less like a Charlie Brown Christmas special.

“Most importantly, Xilinx has regularly noted that the Versal ACAP solutions are to be considered a separate product category than FPGAs, reporting that ACAP goes far beyond the capabilities of an FPGA,” market researcher Robert Castellano wrote for Seeking Alpha last week.

But, as he concluded, the idea may be so good that a buyout from AMD would not be to Xilinx’s benefit.

Analyst Kurt Marko disagrees. He expects to see AMD follow a pattern similar to the one Intel took in 2015 with its acquisition of accelerator maker Altera, where the accelerator producer becomes a semi-autonomous business unit that reports to the more enterprise-facing parent.

“Such a structure minimizes the short-term business disruption while enabling technology cross-pollination and multi-disciplinary strategy teams,” he wrote in a note to DCK. “The deal seems like a logical extension of AMD’s business and a wise use of its highly valued equity, where the stock is up twelve times over the last four years.”

Today’s AMD is nothing like the AMD of yesteryear, known for little more than its Opteron processors. While you can trace Intel’s history through its own products the way you can trace a forest’s history through the rings of a tree branch, AMD has survived the equivalent of a fault-line earthquake, a monsoon flood, and a rash of hurricanes. In 2009, in a life-or-death decision, AMD spun off its crown jewel, its CPU fabrication facilities, along with all the process technology it had innovated into the stand-alone firm GlobalFoundries.

Just three years earlier it had taken the opportunity to become, as some advisors put it at the time, a platform company. It acquired GPU maker ATI, which made Radeon graphics cards. AMD said its goal was to produce a single platform that could not only fuse together graphics for PCs but could fuse the CPU and GPU together into what AMD described (is this feeling repetitive yet?) into a new category of processor.

As an ATI spokesperson explained to me in July 2006 (while AMD’s buyout was still under review), graphics chips and central processors didn’t naturally work well together. Every time a graphics card would refresh the screen, it would poll main memory, which would in turn wake up the CPU and waste processor cycles. A kind of dedicated bus (one step below fusing the two processors onto one die) would at least make these different classes work together. The result would be, as he described it, an accelerator.

In producing automobiles, that spokesperson prophetically said, “there comes a point in which making the engine better doesn’t actually make the car any better.” At some point, something has to fuse the engine, drivetrain, and chassis together.

Something ominously similar, at least in methodology, is what Xilinx is trying to do now. As it considers its future, it should take note of history. Analysts expect major players in a market to always mimic each other’s actions. Intel acquires Altera, Nvidia acquires Arm, and other than Xilinx not starting with “A,” an acquisition of Xilinx would be a parity move. But it was a bad move for AMD once before. And if Xilinx truly does have its own gold mine to tend to with ACAP and Versal, perhaps in some sunny, pandemic-free future, it may be ACAP that leads to an “A” company being acquired after all.