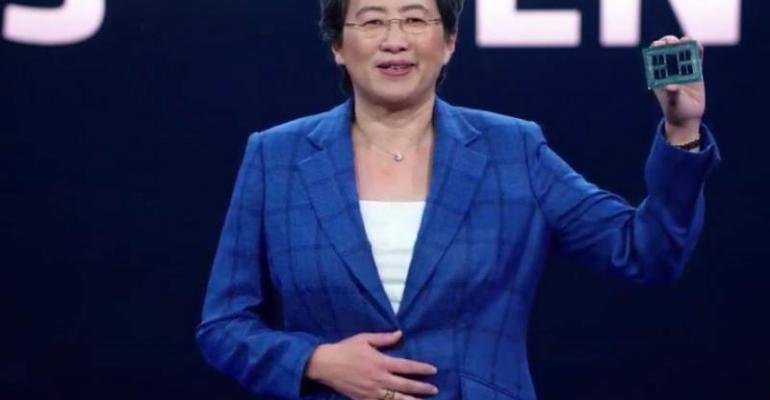 AMD Overhauls Its Epyc Server Processors, Aiming Once Again for the Sweet Spot

The Milan launch focused on supercomputing, but a chat with engineers shows that the company really wants the mid-range market back.

Rather than an upgrade to the previous generation, there’s a completely new design behind what AMD is calling the third generation of its Zen server architecture. Reinvigorated from having doubled its revenue over its previous fiscal year, and having rethought its server processor design from the ground up, the company officially launched the 3rd generation AMD Epyc line (Epyc 7003 series), codenamed “Milan,” Monday.

“Our new Epyc processors extend our leadership in server CPUs, and not by a small amount,” declared Lisa Su, AMD’s CEO and the face of the company’s resurrection after its downward slide toward obscurity in 2012.

Related: Why Google Cloud Turned to AMD to Solve for Runtime Encryption

Though the event was called a “launch,” AMD had already sold plenty of the highest-performing third-gen AMD Epyc SKUs in its new line to cloud service providers. Cloud platforms announced they are serving all-new VM instances based on 7003-series to their own customers at this very moment.

Among the most anticipated new features of third-generation AMD Epyc are a set of security functions which, when combined, enable cryptographic isolation, the ability to encrypt and secure all data on the bus, including in memory and in CPU caches.

AMD Milan’s on-chip key management, explained Noah Beck, AMD Fellow and senior SoC architect, will be used in encrypting the contents of DRAM as they traverse DIMM memory modules. For the Secure Memory Encryption (SME) feature, “you can encrypt all the system memory with a single key, that’s generated on any reset,” he said. “So, from one reset to the next, you cannot see what the previous contents of DRAM were.”

At least theoretically for now, this would eliminate a common vector for server exploitation: triggering a fast soft reset and then leveraging infiltrated startup code to read the non-decayed contents of the previous session’s memory without need of privilege. 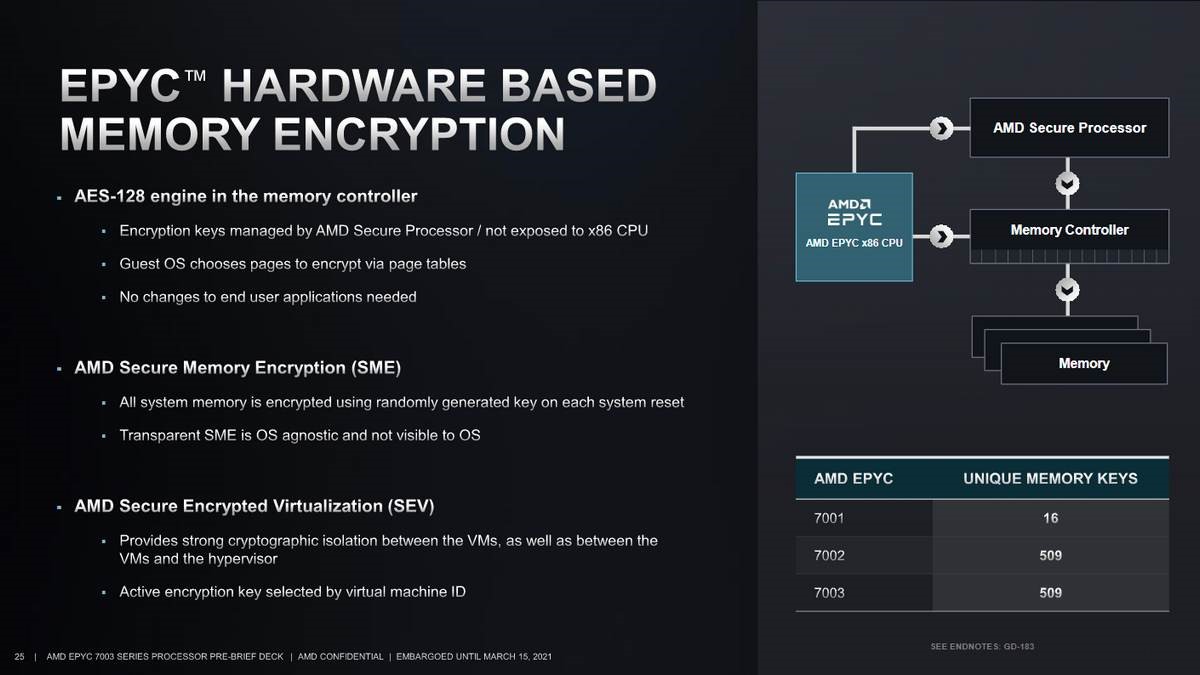 For Secure Encrypted Virtualization (SEV), Beck continued, a single key is used for the hypervisor and a separate key is delegated for each guest VM. Keys are managed by the AMD Secure Processor, he said, which is a separate operating unit that is physically separated from the CPU. That unit will continue to manage and maintain up to 509 simultaneous in-memory keys, as did second-generation AMD Epyc.

As a result of SEV going live, cloud service providers who host their VMs on Epyc 7003 series can offer what they’re calling “Confidential Computing.” Some already began doing so Monday in public preview. These are instances that are completely encrypted, both throughout the network and inside the host.

During Monday’s presentation, Microsoft Azure executive VP Jason Zander explained, “Confidential Computing builds on the strong encryption-at-rest and in-transit capabilities to keep your data encrypted all the way to the CPU. Customers can easily take advantage of this added protection for their most sensitive workloads without the need to rewrite or recompile them. With Confidential Computing, the runtime state of your VMs is fully encrypted by CPU-generated keys, so the contents of the virtual machine are opaque to administrators.”

AMD claims about performance of its new line of server chips are based on performance benchmark scores, some of which have yet to be verified by SPEC.org, an organization that maintains a public registry of posted scores it has independently substantiated. According to performance figures SPEC did publish earlier this year, a Dell PowerEdge model R7525 equipped with dual 64-core, dual-threaded, second-generation Epyc 7H12 processors clocked at 2.6 GHz scored a 543 on SPEC’s most recent battery of floating-point tests, SPECrate2017_fp_base [PDF].

As of late last February, AMD claims, a pair of 64-core third-generation Epyc 7763 CPUs – at the very top of the new line — running on a Lenovo ThinkSystem SR665 scored 636 on this same floating-point test battery.

That’s 128 AMD Epyc cores versus 112 Intel Xeon cores, suggesting that benchmark performance could be tighter if you pair small clusters of AMD’s top-of-the-line against larger clusters and smaller core counts from Intel’s middle-of-the-road.

While the launch event was all about the top of the heap, in an earlier briefing with reporters, AMD engineers touted their new series’ performance in the middle of the pack. In an earlier era of AMD dominance over Intel, a few years after the dawn of the multicore era, that’s where AMD grabbed a beachhead and wouldn’t let go. 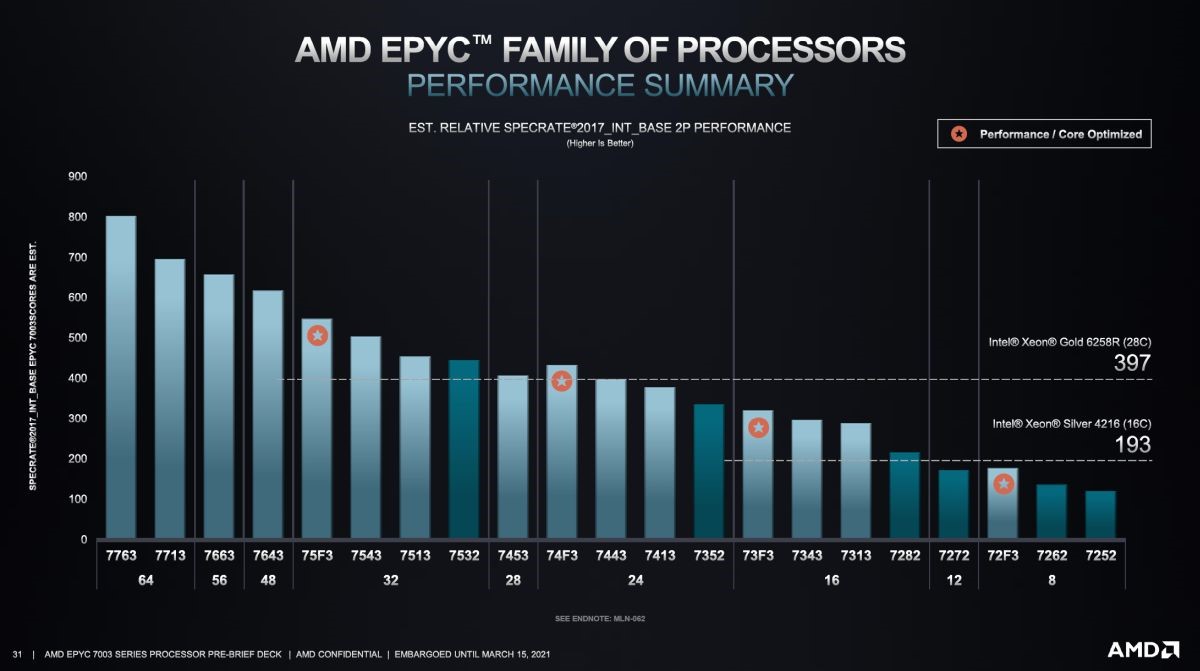 DCK located a score of 193 for a Tyrone Systems DS400TE1-224R with two dual-threaded 16-core CPUs at 2.1 GHz, which appears to correlate with this chart [PDF]. AMD now claims its 7352, which replaces the 7282, outperforms the Xeon 4216 by about 40 percent. AMD did not provide raw score numbers for the 7352, nor were we able to locate posted scores with SPEC at press time.

However, AMD does claim the score for the third-generation AMD Epyc 7532-based server is 434 on the same integer test. SPEC shows it has obtained this score from Lenovo, which used a ThinkSystem SR645 with 2 32-core 7532s clocked at 2.4 GHz [PDF]. AMD cited a similarly equipped Intel Xeon Gold 6258R-based server posting a SPECint score of 309 [PDF].

The middle-tier scores may be what counts in the end for third-generation AMD Epyc’s long-term market success. These are the SKUs that are chosen for inclusion in the general-performance servers used by hyperscale platforms and smaller cloud service providers. It’s models like the 7532 that you’re more likely to find sold in “trays” for service shops, rather than the 7763.

Back in the 2000s, when AMD was pitting Opteron against Xeon, it would intentionally mark down prices for its “most optimized” or “most balanced” processors, creating savings of hundreds per unit versus similarly equipped Intel models. Note the four curious orange stars on AMD’s chart above. Although pricing data has yet to be released, these may be the SKUs most likely to be discounted, should AMD be planning a similar market strategy now. 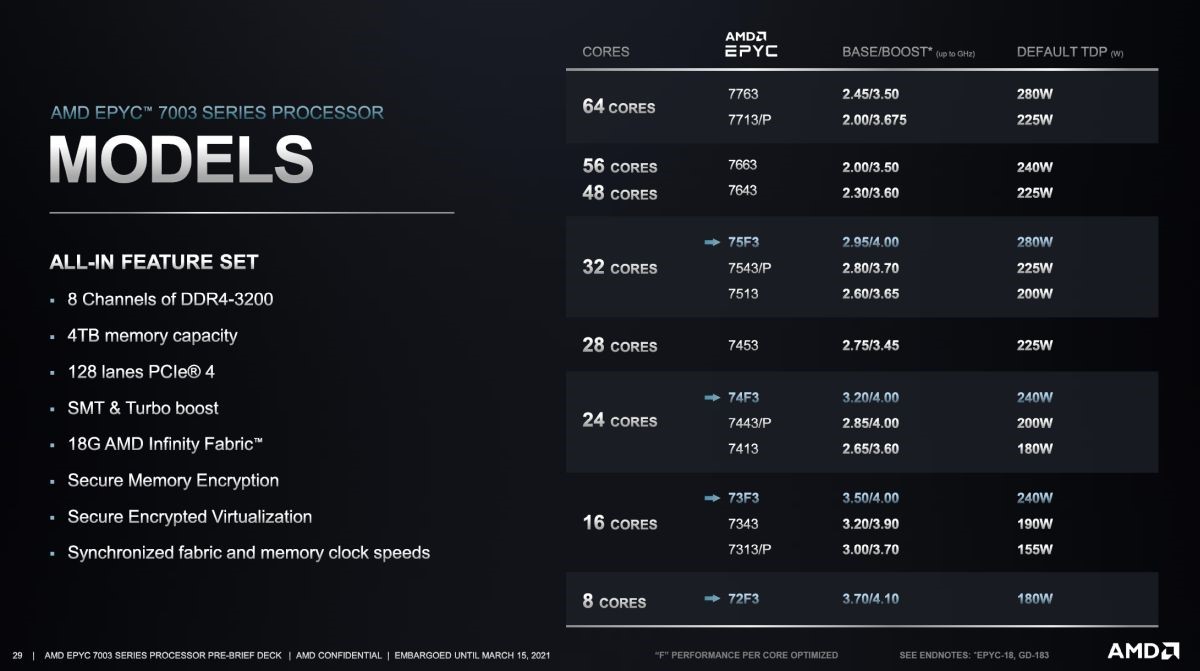 “No matter how you look at it,” said Peddibhotla, “third-gen Epyc delivers leadership performance across the stack, across all core-count boundaries.”