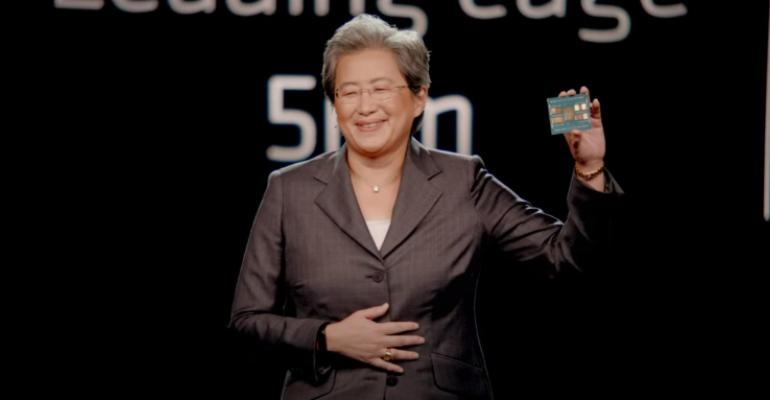 AMD executives introduced new Epyc server processors Thursday with a sales pitch that it hopes will resonate with data center operators needing high performance but are worried about rising energy prices and reaching sustainability goals: the CPU is not only the fastest ever, it consumes half the power of its competition.

“I’m very proud to say 4th Gen Epyc delivers leadership on every dimension. It’s the highest performance. It’s the most efficient. And we’re delivering significantly better performance per watt than our competition,” Su said in a keynote speech. “What that means for enterprises and for cloud data centers, it translates into lower CapEx, lower OpeEx and lower total cost of ownership.”

Those are strong claims, but AMD backs them up with its latest processor innovations, industry analysts say.

As a sign of AMD’s rising influence in the data center server market, AMD’s launch of the 4th Gen Epyc processor is the first time server makers such as HPE and Lenovo have launched a new family of next-generation servers with AMD chips at the forefront of their announcements and not Intel, Kimball said.

“It’s the first time I’ve seen major OEMs launch a new generation of products with AMD and not Intel,” Kimball says. “They usually make Intel the star of the show. Not this time. They’re like, ‘We’re going with AMD. We feel the pressure because customers want it.’ So they’re leading their new generational launch with AMD. It tells you how the market views the two companies now. They see AMD as the leader.”

In fact, during the launch event, cloud providers such as Microsoft Azure and Oracle Cloud Infrastructure announced they are offering cloud services powered by the new Genoa chip, while executives from server vendors like Dell and Supermicro announced new servers running on AMD’s new processor.

AMD on Thursday said the new 4th Gen Epyc processor  – called the Epyc 9004 CPU – is targeted at general purpose use. It features 14 dual-socket and four single-socket options aimed at cloud and HPC, mainstream enterprises and enterprises with more high-performance needs.

During the speech, AMD executives consistently hammered the point that its new processor is faster and more power-efficient than Intel’s latest processor – a 40-core Intel Platinum 8380 processor.

“It’s never been more important to be maniacally focused on the efficiency of server fleets,” he said. “It’s never been easier for enterprises to adopt 4th Gen Epyc and deliver high performance, consolidate their infrastructure for overall cost savings, to drive less energy and take a huge leap toward their sustainability goals.”

AMD has gained significant market share the past few years – and analysts expect that trend to continue with the release of 4th Gen Epyc. While Intel dominates with 70% of the data center CPU market, AMD’s share has more than doubled from 10% in late 2020 to 22% in mid-2022, according to Omdia’s estimates.

“AMD is in an advantageous position as they are early to the market with CPUs having features like DDR5, PCIe 5, CXL, etc.,” Sukumaran said. “Also, the core densities, memory capacity and data throughput of Genoa CPUs are a big attraction for cloud service providers as they can sell more virtual machines per server, generating more revenue per server. This will bring significant advantage for AMD and would help them to increase their market share.”

With the launch of the 4th Gen Epyc CPU, Kimball expects enterprises to increase their adoption of AMD as well.

Cloud companies are more agile and have been faster on the adoption curve. Because of their large size, any gain of performance and power efficiency adds up to huge savings, he said. Enterprises, however, are more conservative in their adoption in new technology and therefore more hesitant to shift from Intel to AMD.

“But with 4th Gen Epyc, it’s hard to ignore the advantages it brings to the workloads that run their organizations,” Kimball says.

John Abbott, infrastructure analyst at 451 Research, agrees, saying enterprises will adopt this. Genoa has already been shipping to hyperscalers and cloud service providers, he added.

“Many larger companies are pleased to see a strong alternative to Intel emerge in the marketplace, giving them more room to negotiate pricing and providing an alternative stream of innovation,” said Abbott, whose company is part of S&P Global Market Intelligence. “The doubling of both density and reduced power consumption will appeal to cloud providers and enterprises alike, just as the global energy crisis is starting to bite hard.”

The 4th Gen Epyc roadmap has variants, too, which will expand the new processor’s reach, he said. Next year, the company plans to ship Bergamo processors tuned for cloud, Genoa-X with extended 3D cache for technical compute and databases, and Siena for the telecom sector, he said.

As for Intel, don’t count out the chip giant, analysts said. Intel has developed a product roadmap that starts with the delivery of Sapphire Rapids.

“Intel may be at a disadvantage now, but Intel is still Intel, and they will certainly respond,” Kimball says.