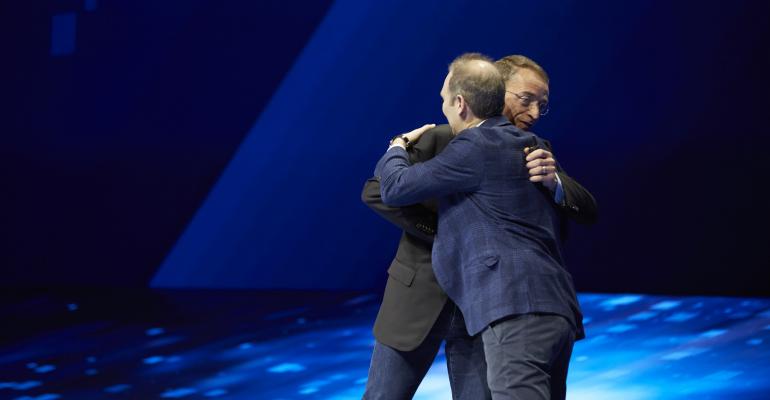 What You Need to Know About AWS’s Hybrid Cloud Play

What it’s done in the area before, and how the Outposts announcement is different.

Analyst rankings and market-share estimates for Infrastructure-as-a-Service clouds show Amazon Web Services with a comfortable lead over Microsoft Azure, with Google Cloud Platform being a distant third. They rank the same in public cloud storage services, according to Gartner. A third major category of cloud services has now emerged as these players’ newest battleground: hybrid cloud, or the ability to combine customers’ own or leased data centers with public clouds.

Amazon has been facilitating hybrid cloud in one way or another almost since the inception of AWS. AWS Direct Connect and Amazon Virtual Private Cloud extend your private network to the AWS public cloud, for example. Other services like AWS Storage Gateway allow on-premises applications to seamlessly connect with AWS cloud storage, while the AWS Directory Service provides a managed Microsoft Active Directory instance in the AWS Cloud.

Customers are reevaluating what they can and cannot move to the cloud based on new regulations and application requirements. Data gravity, or where data should be stored so it can be used with maximum efficiency, has become ever more important as the volume of data coming from new sources such as IoT explodes. Data-location decisions now weigh tradeoffs between network bandwidth and processing horsepower.

The question then becomes which cloud vendor can help me tackle these problems in the most cost-efficient manner? The answer depends on the application and often comes down to past design decisions, such as storage and virtualization infrastructure choices.

All the AWS offerings form the building blocks of a custom hybrid cloud solution. But what if your organization is primarily a VMware shop, and you want to move some or all of that to the cloud? Does that mean you have to completely re-architect that solution around the Amazon architecture?

Like Amazon, VMware maintained the leader position in Gartner's enterprise virtualization magic quadrant for quite some time, although they retired that report in 2017. Amazon announced a partnership with VMware back in October of 2016 and released a joint product called VMware Cloud on AWS in 2018. The intent was to give VMware customers options to run workloads on the Amazon public cloud.

"We've seen lots of customer momentum around moving everything possible to AWS,” Eron Kelly, GM, Enterprise Services Marketing at AWS, told me. “VMware just works, and our customers are comfortable with that environment.” From the original partnership allowing VMware virtual machines to run in AWS has come a whole new direction under the VMware Hybrid Clouds branding. VMware also touts its ability to connect will Azure and Google Cloud Platform.

It's not unusual for technology companies to follow a competitor’s lead with new offerings. Amazon Outposts seems to be just that, with Amazon following Microsoft's Azure Stack lead. Scheduled for delivery later this year, the Amazon Outposts concept brings Amazon hardware and software to private data centers. Two flavors will be offered, one catering to the VMware customer base and the other that promises to essentially turn your data center into your private mini AWS availability region.

Where Amazon Outposts differs from Azure Stack is hardware. While Microsoft works closely with its hardware OEMs to maintain a minimum set of standards for Azure Stack, Amazon says it will be selling the same hardware it runs in its own data centers. This will allow its public cloud and on-premises offerings to stay in lockstep on the software side. Microsoft does not claim to have full parity between public Azure and Azure Stack from that perspective.

While Amazon is a little late to the game pushing its cloud hardware and software out to customer sites, it intends to do it bigger and better than Microsoft currently does. No specific release date has been set for Amazon Outposts other than sometime this year. The verdict is still out on customer acceptance, but just the fact that it’s decided to roll out this product should tell you Amazon thinks it’s necessary to stay ahead of Microsoft.