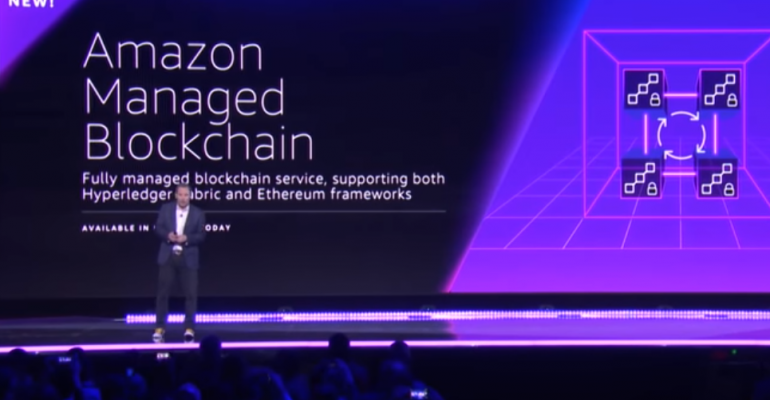 What You Need to Know about Amazon Managed Blockchain

Blockchain continues to move to the mainstream, and the model has received a big boost with the general availability of Amazon's new Managed Blockchain service. Amazon's Managed Blockchain, as well as its Quantum Ledger Database, were announced at the company's re:invent conference in November 2018. Amazon Managed Blockchain became generally available in April, while Quantum Ledger Database is available in limited preview. Together, the two Amazon technologies comprise what might be called CBaaS, or cloud blockchain as a service, and the combination may prove invaluable. As cloud-native apps, the two support Amazon’s entire ecosystem of services and make immutable transaction tracking very simple to perform. From a security perspective, it’s an indelible transaction/log/event safe that can be linked inside of Amazon’s resources and uses a combination of existing technologies.

Amazon Managed Blockchain puts together the concept of object creation and the inability to change that object--immutability based on collaborative agreement, based on multi-user transaction vetting. It bucks the traditional model of online transaction processing (OLTP) by using a known distributed communications and processing fabric. Blockchains can be updated in a subsequent transaction, but records written are immutable. Encryption additions and methods make it difficult to fudge the data held subsequently within.

Today, Amazon Managed Blockchain can be created, secured and maintained through Amazon’s implementation of the open source Hyperledger Fabric and, in the future, Ethereum.

By contrast, Amazon Quantum Ledger Database (QLDB) is an audit journal, with a certificate authority managed by Amazon, whose imprimatur becomes the transaction coordinator. You tell Amazon what the transaction is, and Amazon stamps the transaction with journal notes. Transactions subsequently never change, but are instead modified through subsequent transactions that are also stamped in the journal. No multi-party vetting is necessary to build the database.

Either method provides strongly private, or widely accessible, transactional logs, and QLDB additionally backs up the Managed Blockchain, allowing replicas for exploration, trending and other examinations/queries.

For some, this is a scary concept. Once the data is in the blockchain, it is immortal. It can be updated to reflect changes, but all entries are new, and are also indelible events. Cancellation isn’t possible. Finger-pointing, crack-slippage and other foibles of transactions are removed, as all transactions are in a chain; there are no table updates that can obscure or introduce problems, and no transaction lives in an unknown or unverifiable state. It’s there, or it’s not, and forever.

Both versions of blockchain are managed by Amazon’s Key Management service. The keys can be used to form the basis of a CA, which is central to either blockchain design and user/node roles. Both the Hyperledger Fabric and Ethereum are well-known quantities with communities behind them. Amazon becomes a convenient host for the more private Hyperledger Fabric and the more public Ethereum blockchain, potentially sharing common Amazon Key roles among differing fabrics of Amazon users and customers. The convenience factor is high, and Azure, IBM and others are likely to follow, in my estimation.

The QLDB is essentially a third-party stamp of transactions in a database, albeit with a definable schema and plethora of possibilities, as comes with the turf of database as a service. The two types of transaction ledgers, blockchain or QLDB, can also be replicated. If members of a blockchain authorized to commit transactions agree, they become part of the blockchain, where QLDB is a more monolithic database journal. Amazon’s multi-site data centers should make fast work of ledger/journal queries, as replicas can be set into their different geographies, albeit at a potentially higher cost for the reduced latency of query cost.

As QLDB serves as a transaction journal for Amazon Managed Blockchain, Amazon will need to evolve the query tools against all three frameworks, and doorways to API sets that can integrate other AWS components will evolve the value of blockchain and ledger/journal tracking.