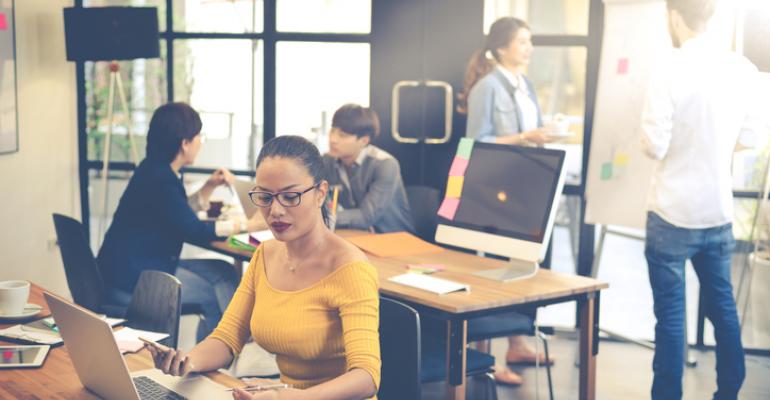 What the Hottest AWS Cloud Services Tell Us About Enterprise Adoption

Eighty-five percent of spending on AWS cloud services is concentrated across only four products, with Amazon Elastic Compute Cloud (EC2) accounting for the bulk of cloud spending by organizations last year.

Cloud cost management platform Cloudability analyzed anonymized data from over 1,500 organizations with over $2.5 billion in AWS cloud services spending in 2017. The data shows that AWS EC2 accounted for 58.7 percent of cloud spend in 2017, with 9.9 percent of spend on Amazon Elastic Block Storage (EBS); 9.3 percent on Amazon Relational Database Service (RDS) and 6.3 percent on Amazon Simple Storage Service (S3). Amazon S3 was the first service AWS launched back in 2006, and it remains one of its most popular, at least by spend.

Spending and usage across AWS cloud services suggest that while many organizations are still in the early stages of adoption – Cloudability says only 10 percent of workloads have moved to the cloud – there is a big push towards using the cloud for more sophisticated workloads like AI and machine learning, as well as containers and serverless computing.

"The cloud is something that is a profoundly big change, quite literally serving as one of the underpinnings of the fourth industrial revolution. Yet we realized that as we've watched the cloud grow, disrupting some industries while creating exponential new industries and business models, there have been few extensive real-world studies that pinpoint where cloud is and where it's heading," Erik Onnen, CTO, Cloudability said in a statement. "With State of Cloud 2018, we wanted to liberate our massive data set, share the insights we are seeing across billions of dollars of cloud spend and help the entire ecosystem - enterprises, devops teams, cloud vendors and industry watchers - to get a better understand of cloud adoption and usage trends."

So-called lift-and-shift migrations continue to dominate cloud adoption, Cloudability said, noting that organizations will often start with one of the four most popular AWS cloud services before graduating to more advanced capabilities offered by other products in its portfolio.

“Among these, CloudWatch, ElasticSearch, ElastiCache and RedShift have the fastest growth rates,” Cloudability said in its report. “This shows that cloud users are getting more sophisticated with their choice of services, and perhaps beginning to build out more nuanced architectural components in addition to the ever-popular building blocks of EC2, EBS and S3.”

Enterprises tend to start with development and test workloads, the report said, noting that as organizations become more familiar with AWS cloud services they are more likely to deploy production-scale databases in the cloud, or use the public cloud for AI and machine learning workloads.

“We continue to see high growth rates related to GPU-based instances, even though it’s a smaller percentage of the overall spend on compute. As companies start to further explore and invest in machine learning capabilities, we expect to see this growth continue,” Cloudability said.

High IO instances have a growth rate of 351 percent, far ahead the growth rate for GPU dense (84 percent) and general purpose (82 percent) instances. This suggests that customers are increasingly deploying production-scale databases in the cloud, the report said.

Development and test workloads typically sit on general purpose instances, but as organizations are better able to assess how they are using the cloud, they may find a more appropriate instance match for their applications which offer more compute, memory, and storage, Cloudability said. Visibility into cloud usage not only helps organizations right-size their applications, but also helps them save money as they can take advantage of newer features like per-second billing on EC2 and EBS instances, or Reserved Instances, which offer significant discounts for companies that reserve capacity.

Usage of containers grew significantly in 2017, as Kubernetes came out on top in terms of market share, ahead of Mesos, OpenShift and Rancher. In Q4 2017, AWS container services saw a growth rate of 246 percent, Cloudability said. To support this demand, AWS launched Amazon EKS, a managed Kubernetes service, and AWS Fargate, for users to run containers without having to manage servers or clusters.

“Serverless continues to be attractive to organizations since it doesn’t require management of the infrastructure. As companies migrate increasingly to the cloud and continue to build cloud-native architectures, we think the pace of serverless adoption will also continue to grow,” Cloudability said.