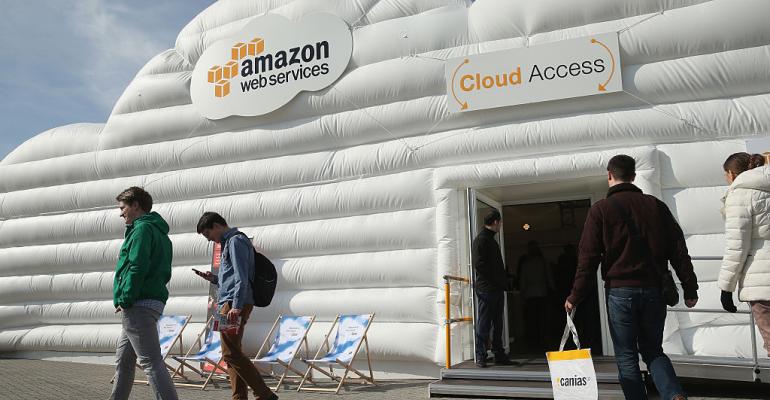 Pentagon officials made clear they have little patience for continuing debate over the issue.

(Bloomberg) -- The U.S. Defense Department isn’t budging from its decision to award a single contract for a cloud-computing project -- and isn’t saying why -- in a public exchange with vendors over details of the multibillion-dollar competition.

The Pentagon posted answers to 1,089 questions raised by 46 companies, two associations and three government agencies. The comments were posted anonymously on Monday, with the military’s response alongside each entry.

Rival contractors complain that the winner-take-all approach favors Amazon.com Inc., the biggest supplier of cloud services. But Pentagon officials made clear they have little patience for continuing debate over the issue. In response to a question on the “rationale for a single award for this contract,” the answer posted was blunt: “This rationale is not going to be published at this time.”

In an interview, Tim Van Name, deputy director of the Defense Digital Service, which is overseeing the contract competition, said “I don’t see the value” of more exchanges because “we’ve made it clear that we are going forward with a single award” and “it is not something that we believe is up for debate with industry.”

“It was a decision the department made based on its needs, so adding context there doesn’t benefit us,” he said.

The process for selecting a winner will include input from committees “heavily filled with folks who are technical experts -- representative across the services,” Van Name said. These experts “understand the technologies and specific department needs.”

International Business Machines Corp., one of the potential bidders, responded to the Pentagon’s posted comments with an argument that captured the sentiment of those pushing to divide the prized contract into multiple awards.

“No major commercial enterprise in the world would risk a single cloud solution, and neither should the Pentagon,” Sam Gordy, general manager of IBM U.S. Federal, said in a statement. “IBM will continue to urge that America’s defense cloud be multi-layered, robust, and consistent with the best practice used by every major cloud user in the world.”

Tech companies jockeying for a piece of the contract argue that a single-source approach will stifle innovation and increase security risks. Oracle Corp. has been leading a campaign along with other tech giants to unseat Amazon Web Services as the perceived front-runner for the job, according to people familiar with the matter.

In the comments and questions posted by the Pentagon, three entries advanced almost identical arguments that the Defense Department has failed to comply with government regulations requiring a contract officer to provide a justification for not making multiple awards. Such issues could be advanced to challenge a winner-take-all award before the Government Accountability Office and in the courts.

A protest could be filed after the contract winner is announced or, less typically, after the final version of the request for proposals, which would delay the award.

The prospect that a contractor might exercise that right drew a combative reaction from Van Name. He said that it would delay providing cloud technology for military operations like those he saw on a recent trip to Erbil in Iraq, where U.S. personnel had to sort photos of potential targets by hand.

The lack of advanced technology is “putting a lot of folks in harm’s way, so the idea of a protest makes me sick to my stomach,” he said.

The government also issued a revised draft proposal Monday, clarifying specific requirements that must be met under FedRamp, or the Federal Risk and Authorization Management Program, a framework for handling unclassified data, Van Name said.

The new draft also says that the prime contractor must have the ability “to maintain control over certain parts of JEDI Cloud,” a formulation that could open the way for more competitors than the original proposal, which would have required the winner to “demonstrate ownership of the proposed hardware infrastructure.”

The Pentagon reiterated that while it will award a single contract, the eventual winner could be made up of a team of companies. The contract, known as JEDI -- for the the Joint Enterprise Defense Infrastructure Cloud Program -- won’t prevent the Defense Department from working with other cloud vendors in the future, Lieutenant Colonel Kaight Meyers, program manager for the cloud initiative, said in a letter posted along with the comments and responses and the revised proposal.

“JEDI Cloud is intended to be available enterprise-wide and complementary to other existing cloud initiatives. It will not preclude the release of future contracting actions,” Meyers said.

Cloud services -- in which computing power and storage are hosted in remote data centers run by a third-party company rather than on-site in locally owned machines -- can make it easier for large organizations to move and integrate data across different platforms, quickly expand the data storage it needs based on usage and make system-wide security upgrades to software.

The Defense Department has said it’s making the shift to the cloud to give it a tactical edge in the battlefield and strengthen its use of emerging technologies. The department plans to issue the final request for proposal by May 15 and award the contract by the end of September, Van Name said.

“We are playing catch-up” to industry on adopting the cloud, he said.