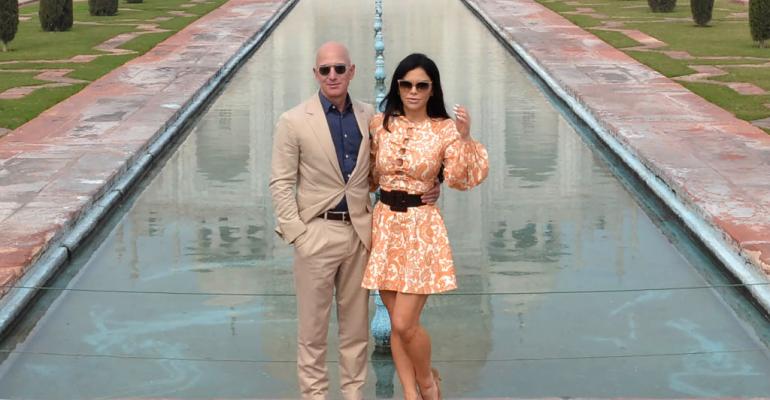 PAWAN SHARMA/AFP via Getty Images
Chief Executive Officer of Amazon Jeff Bezos (L) and his girlfriend Lauren Sanchez pose for a picture during their visit at the Taj Mahal in Agra on January 21, 2020
Companies>Amazon

“We can save Earth.”

Bezos is starting with $10 billion and will begin to issue grants in a few months. “It’s going to take collective action from big companies, small companies, nation states, global organizations and individuals,” he said Monday in a post on Instagram. “We can save Earth.”

Bezos, the world’s richest person, is under pressure to balance Amazon’s need to deliver goods quickly with the environmental consequences of the rapid growth of online shopping. There is tension within Amazon on the issue, with some employees saying the company isn’t doing enough and there is a threat of punishment for those who are too outspoken on the matter.

The company last year said it would reach 80% renewable energy use by 2024 and 100% by 2030, up from 40% today. The effort relies on a fleet of electric vehicles. The moves came after a worker group, Amazon Employees For Climate Justice, staged a protest and wrote a shareholder proposal based on their concerns.

Related: How Much Is Netflix Really Contributing to Climate Change?

The employee group said Monday that it applauds Bezos’s philanthropy, but it doesn’t change criticism about the way Amazon operates -- not just with regards to shipping, but also the data center energy used for their cloud storage business, propping up the fossil fuels industry. “What this shows is that employees speaking out works,” the group said in an emailed statement. “We need more of that right now.”

In theory, online shopping could benefit the environment if it resulted in fewer vehicle trips to stores and customers placed large orders infrequently. In reality, shoppers still browse in stores and order online when they’re ready to purchase. Amazon Prime, a subscription program that includes delivery discounts, allows people to make frequent small orders without penalty, resulting in a larger number of vehicle trips and more boxes than if orders were placed less frequently in batches.

Bezos, 56, has a net worth of more than $130 billion, according to the Bloomberg Billionaires Index. His $10 billion investment, announced separately from the company’s efforts, marks his largest philanthropic investment to date. His other major personal investment is in space travel, which he has also at times called necessary because of the instability of the Earth’s climate. For years, Bezos didn’t pursue major philanthropic projects, leading to public pressure as his wealth rose.

The chief executive has recently started offloading some of his Amazon stake. Between Jan. 31 and Feb 6, Bezos sold 2 million shares, worth $4.1 billion, as part of a pre-arranged trading plan. It’s not just for philanthropy; he recently agreed to buy a $165 million Beverly Hills mansion, and has started playing around in the art market, people familiar with the matter have said.