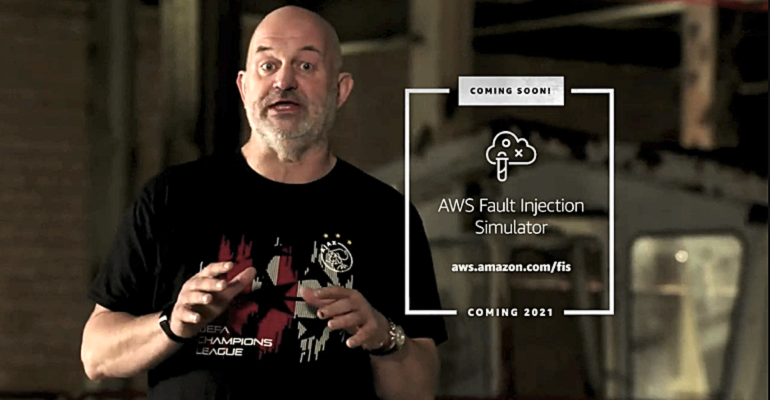 AWS Brings Chaos Engineering to the Cloud at re:Invent 2020

Amazon CTO Werner Vogels talks about challenges resulting from the pandemic and announces new services during the third week of the re:Invent 2020 virtual conference.

In a keynote address on Dec.15 during the third week of Amazon Web Services' re:Invent 2020 virtual conference, Vogels (pictured) announced a series of new innovations and services —  including a chaos engineering service — for the public cloud provider and outlined technology approaches that will be growing trends in the future. He also spoke at length about the challenges of 2020 and the opportunities of digital transformation.

"It has been a challenging year for all of us. Everyone I know has been affected, either professionally or personally," Vogels said. "As builders, we face unique challenges to keep building, but we also have the opportunity to make a disproportional impact as digital has become the default way to access services."

Impact of Arm and Climate Change

While the COVID-19 pandemic is a key concern, so too is climate change. Cloud users can reduce their impact on the environment — as well as their costs — by using less power, according to Vogels.

In 2018, AWS announced its custom Arm processor know as Graviton, touting its price/performance for cloud workloads, and the company has been steadily improving the technology over the past two years. Among the many organizations that are using Arm is social media giant Twitter, which announced on Dec. 15 that it is committing to using AWS Graviton2-based compute instances.

"I see migrating to Graviton and Arm as a long-term business investment," Vogels said. "Arm processors have lower costs and higher performance."

Developing for the cloud in recent years has also been about actually coding in the cloud with services such as the AWS Cloud9 integrated development environment. Vogels noted that while Cloud9 has been a popular service, some users prefer to use a command-line terminal view to develop code. That's where the new AWS CloudShell service comes into play.

"AWS CloudShell is a new service built into the AWS console that gives you access to a Linux terminal inside your browser," he said.

CloudShell isn't just a command-line interface, Vogels said — it's also a fully featured shell environment that brings in commonly used tools including PowerShell, Python, Bash and Git. Just like any other developer shell environment, a developer can install additional tools as needed, he added.

Chaos Engineering Comes to the Cloud

AWS also want to help users ensure cloud operations are resilient and can withstand different types of errors, which is where the new AWS Fault Injection Simulator (FIS) — announced by Vogels during his re:Invent 2020 keynote — comes into play.

"Even well-built cloud applications today can depend on dozens of services and components, all working together, and failures can happen at every level," he said. "To understand how your application will behave when these events happen, the best form of testing is chaos engineering."

Chaos engineering is not new, having gained notoriety in 2011 when Netflix released the Chaos Monkey tool to test its own services. Its goal is to understand how an application responds to issues by injecting failures into the infrastructure, Vogels said.

The AWS Fault Injection Simulator is a fully managed data engineering service for running chaos engineering in the cloud. Vogels said FIS enables users to inject different types of faults such as latency or failure of underlying compute networking databases as well as control plane level faults, such as API throttling and server errors. The service can be used to improve application resilience as well as performance. It is set to become generally available in early 2021.

"Out of all the things we're announcing this year, this is the one thing I'm most excited about," Vogel said about FIS. "By offering this as a service, I believe that we can have a massive positive impact on building more robust, more durable and more dependable systems in the cloud."