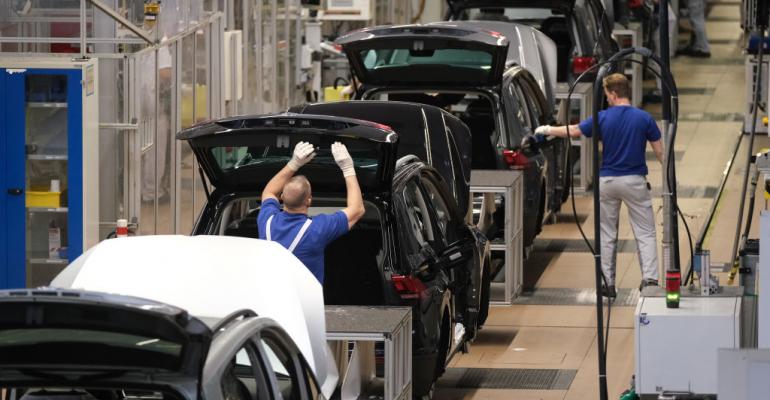 Unlike the platform it’s building on Azure, VW’s Amazon platform will focus on optimizing manufacturing.

The Volkswagen Industrial Cloud will interconnect production equipment inside the automaker’s 122 manufacturing plants around the world, collect and store operational data from that equipment, and analyze it to optimize production, according to AWS. In the long term, the platform may also add data from some 1,500 VW suppliers to the mix.

Besides its raw bread-and-butter infrastructure services, such as cloud storage, the platform will involve services AWS has been rolling out in recent years to support the next generation of enterprise software platforms that marry huge amounts of Internet of Things data with machine learning.

The plan is to build a company-wide VW data lake on S3, Amazon’s cloud storage service. IoT Greengrass, IoT Core, IoT Analytics, and IoT SiteWise will “detect, collect, organize, and run sophisticated analytics on data from the plant floor.” In instances where near-real time analytics is necessary, data will be processed right on the plant floor by AWS Outposts, the recently announced Amazon hardware and software solution that essentially turns a customer’s own premises into their own private mini-AWS availability region.

It’s a similar idea to a part of what GE Digital’s Predix “industrial IoT” cloud promises to deliver. The platform Volkswagen is building on Azure is like another major part of the Predix promise. (GE uses both AWS and Azure for Predix.) Predix collects data on the factory floor and tracks parts out in the field for things like preventative maintenance. The VW cloud on Azure would connect cars on the streets, while the AWS project is focused on manufacturing operations.

According to Fortune, AWS and VW may also make the platform available to other companies, which would tick another Predix box. GE Digital built its platform to enable companies to write their own IoT and analytics applications and run them on top of it.

Volkswagen appears to have decided against using AWS for its connected-car cloud because it wants to keep Amazon as far away as possible from its consumer relationships, as one of the automaker’s executives told CNBC earlier. This has become a common theme in cloud-provider decisions by consumer-facing companies, who are justifiably fearful of Amazon coming for their customers. While Amazon hasn’t signaled any plans to get into the auto-manufacturing business, it has at least poked around the possibility of deliveries by self-driving trucks.