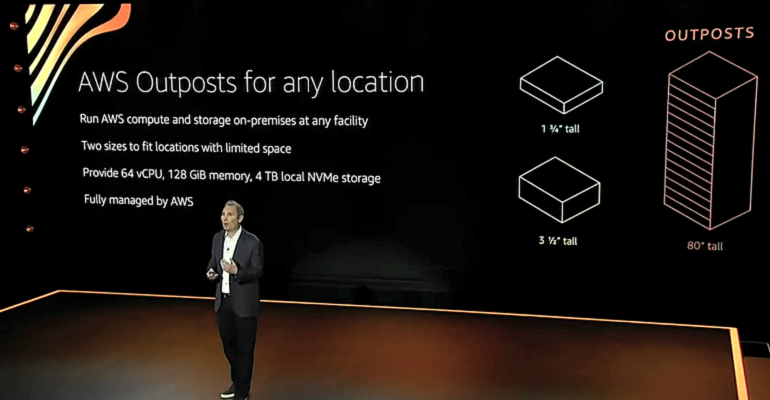 Amazon Web Services (AWS) kicked off its annual re:Invent conference on Dec. 1 with a series of announcements of new services that expand the public cloud vendor's platform.

AWS re:Invent is typically only a weeklong event but this year has been recast as a virtual event that will last three weeks. The longer event is still shorter than Google's Cloud Next, an event that lasted nine weeks. Although AWS re:Invent 2020 is spread across three weeks, AWS still announced a slew of new services on the first day.

Related: Why AWS’s Hybrid Cloud Play Is Different, and What It Means for Colocation

Among the new cloud services that AWS announced are a series of compute instances, including Amazon EC2 Mac instances. The macOS instances mark the first time AWS is providing the Apple macOS operating system as an option for cloud computing. The macOS instances run on Apple Mac Mini systems that are provisioned within the AWS cloud.

For deep learning and artificial intelligence workloads, AWS announced new EC2 instances powered by Habana Gaudi accelerators that offer the promise of better price/performance than existing EC2 instances that use GPUs for AI. AWS also previewed a custom-developed chip called Trainium that will be available in 2021 to help accelerate machine learning training in the cloud.

From CodeGuru to DevOps Guru

"DevOps Guru makes it much easier for developers to anticipate operational issues before it bites them," Jassy said during his Dec. 1 keynote. "Using machine learning, informed by years of Amazon AWS operational experience and code, we identify potential issues."

The last part of Jassy's three-hour re:Invent keynote was focused on hybrid cloud and, more importantly, how AWS is now defining that.

Jassy argued that hybrid is fundamentally about enabling an organization to consume cloud resources outside of a large public cloud deployment. AWS customers want to be able to consume AWS cloud resources in different modalities, using the same tools they're already using to manage on-premises resources, he said. The effort to enable that began with the debut of VMware Cloud in AWS in 2017, which allows organizations to use the tools they've been using for years for their on-premises infrastructure and manage their infrastructure on AWS.

According to Jassy, AWS customers also wanted to a version of AWS that could run on-premises and at the network edge. That led to the AWS Outposts service, introduced in 2018, a full rack server system that enables an AWS node to run on-premises. At AWS re:Invent 2020, Jassy announced two new Outposts offerings that are smaller than the original — one about the size of a pizza box and the other the size of two pizza boxes.

"These two smaller Outposts formats have the same functionality of Outposts, but just for a small space," he said. "That means that restaurants or hospitals or retail stores or factories can use Outposts that AWS distributes to that edge."

Jassy emphasized that AWS' vision for hybrid cloud is to bring the AWS experience to customers wherever they are.