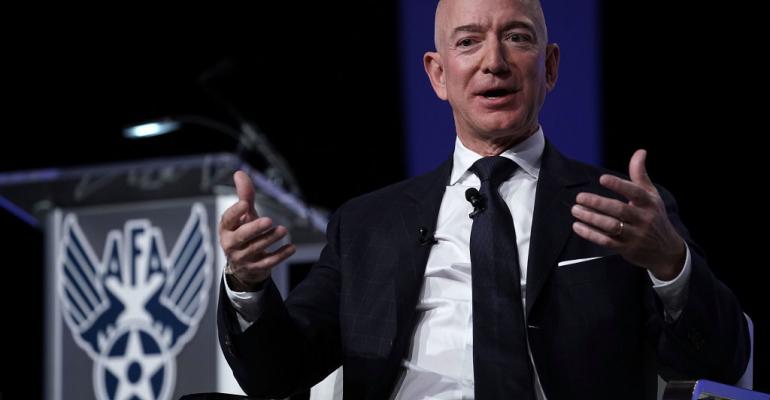 AWS claims in a lawsuit that DOD ignored its superior tech and gave the contract to Microsoft despite its "key failures" to comply with JEDI requirements.

Naomi Nix (Bloomberg) -- Amazon.com Inc. claims the Pentagon failed to fairly judge its bid for a cloud contract worth up to $10 billion because President Donald Trump viewed company founder Jeffrey Bezos as his “political enemy.”

Amazon Web Services, Amazon’s cloud unit, claimed in a lawsuit that was made public on Monday that the Defense Department ignored Amazon’s superior technology and awarded the contract to Microsoft Corp. despite its “key failures” to comply with requirements for the so-called Joint Enterprise Defense Infrastructure, or JEDI, contract.

The Pentagon made those errors because of improper interference by Trump, who Amazon said “launched repeated public and behind-the-scenes attacks to steer the JEDI Contract away from AWS to harm his perceived political enemy -- Jeffrey P. Bezos,” according to the lawsuit. The president has long criticized Bezos, especially for his ownership of The Washington Post.

Defense Department spokeswoman Elissa Smith denied any external factors influenced the bidding process. Microsoft spokeswoman Janelle Poole said in a statement that the Pentagon “ran a detailed, thorough and fair process in determining the needs of the warfighter were best met by Microsoft.”

Amazon, which filed its lawsuit under seal last month in the U.S. Court of Federal Claims, is seeking to prohibit the Defense Department from proceeding without a new evaluation or award decision. The department won’t start work on the contract beyond certain “preparatory activities” until February 11, according to the lawsuit.

“Basic justice requires reevaluation of proposals and a new award decision,” the company said in its lawsuit. “The stakes are high. The question is whether the President of the United States should be allowed to use the budget of DoD to pursue his own personal and political ends.”

The Pentagon’s JEDI project is designed to consolidate the department’s cloud computing infrastructure and modernize its technology systems. Amazon was widely seen as the front-runner for the contract because it previously won a lucrative cloud deal from the Central Intelligence Agency and had earned the highest levels of federal security authorizations.

Amazon said in its lawsuit that the Pentagon’s “pervasive errors are hard to understand and impossible to assess separate and apart from the President’s repeatedly expressed determination to, in the words of the President himself, ‘screw Amazon.’”

Amazon was citing a new book by Guy Snodgrass, a speechwriter to former Defense Secretary Jim Mattis, that alleges that Trump, in the summer of 2018, told Mattis to “screw Amazon” and lock it out of the bid. Mattis didn’t do what Trump asked, Snodgrass wrote. Mattis has criticized the book, but hasn’t commented on the allegation concerning Amazon.

Amazon’s lawsuit also lists other comments and actions by Trump and the Defense Department to make its case that the Pentagon bowed to political pressure when making the award to Microsoft. In 2016, Trump said that when that he would become president, Amazon would “have problems” and that the company was “getting away with murder,” according to the lawsuit.

The company also cited the president’s comments during a press conference in July, when he openly questioned whether the JEDI contract was being competitively bid, citing complaints from Microsoft, Oracle Corp. and International Business Machines Corp. Later that month, Trump “doubled down” on that rhetoric when he tweeted television coverage that characterized the JEDI contract as a “Bezos bailout,” the lawsuit says.

As Trump’s criticisms persisted, Amazon alleges, the Pentagon took numerous actions to “artificially level the playing field” between the company and its competitors during the bidding process, including a decision in mid-2018 to refuse to evaluate past contract performance. For example, the lawsuit alleges that months after the Pentagon initially reviewed Amazon’s proposal, the Defense Department changed one of its requirements for hosting sensitive data, which prevented Amazon from leveraging its existing data centers and increased its total proposed price.

The Seattle-based company also contends the Pentagon ignored critical aspects of its proposal while overlooking Microsoft’s deficiencies on concerns regarding security, price and its ability to offer a marketplace of third-party technology products.

While no law prohibits a president from weighing in on a contract, federal agencies must follow strict rules about what they can and can’t consider when making an award decision. Agencies must choose vendors based on the criteria outlined in their requests for proposals to avoid inviting a successful legal challenge, according to procurement experts.

Still, the experts have said loosing bidders such as Amazon face steep odds to successfully overturn a contracting decision on the legal basis of political or vendor bias.

A study conducted by Rand Corp. found that the U.S Court of Federal claims sustained just 9% of contract protests against the Defense Department from 2008 through 2016. The Government Accountability Office sustained 2.6% of contract protests during the same time period, though a much larger percentage of challenges led the agency to make changes to the procurement decision or terms, according to the study.