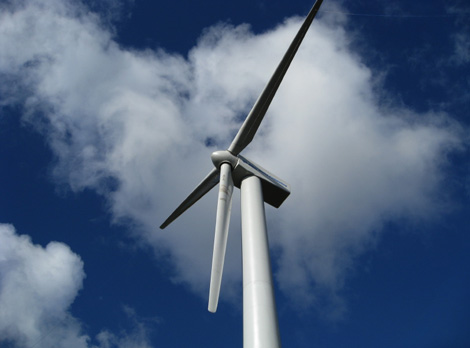 The 131-foot tall wind turbine at Other World Computing in Woodstock, Illinois.

There are a number of data center providers that use utility power that is sourced from wind generation, but only a handful of working data centers that use on-site wind generation to provide power for their servers. Here's a look at projects that are using or planning to generate power from their own wind turbine installations.

Other World Computing (Illinois)
Data Center Powered By The Wind

A small lSP and hosting company in Woodstock, Illinois, Other World Computing (OWC) may be the first data center operator in the U.S. to power its facility entirely with wind power from an on-site turbine. In 2009, OWC began using a 131-foot-tall wind turbine to provide all the electric power for its building, which includes the company’s headquarters and a data center supporting its web hosting and ISP services.

Baryonyx Corp., a Texas start-up, announced plans in 2009 to build a data center powered by energy from huge “wind farms” in the Texas panhandle and the Gulf of Mexico. The firm has been awarded three wind energy leases for 8,000 acres onshore in Dallam County, Texas and another 38,000 acres in the Gulf of Mexico, the company said. And Baryonyx purchased 8 acres of land in Stratford, Texas for its data center project.

One example of a data center company that has plans to build wind farms on site is Green House Data, which is located on the plains of Wyoming. Additionally, Microsoft is using wind-generated electricity through offsets with its utility company to power containers that house its Virtual Earth application. While this is not unusual in and of itself, it points toward a possibility of using containers placed near sustainable energy sources to take advantage of geographical features, such as high winds pr geothermal power.

Located in Cheyenne, Wyoming, Green House Data in operates a 10,000-square-foot data center that is powered entirely through renewable wind energy from its local utility. The company currently uses electricity provided by Cheyenne, Light, Fuel and Power, which has partnered with Tierra Energy on a 30-megawatt wind generation site in Cheyenne. Green House Data has plans to build several wind turbines on site in the next several years, and says it facility is the largest wind-powered public data center in the nation. The Data Center Knowledge story above from 2007 outlines their plans for wind-energy creation on site.

Microsoft uses Verari container units at a facility in Boulder, Colorado to house servers for its Virtual Earth mapping program. The firm noted that the containers were “100 percent wind-powered” through offsets purchased from Boulder-based Renewable Choice Energy. While these particular units weren’t powered directly by wind turbines, Microsoft has tapped into a major advantage of containers: they can easily be placed near renewable energy sources, allowing companies to chase green power to meet carbon reduction goals.