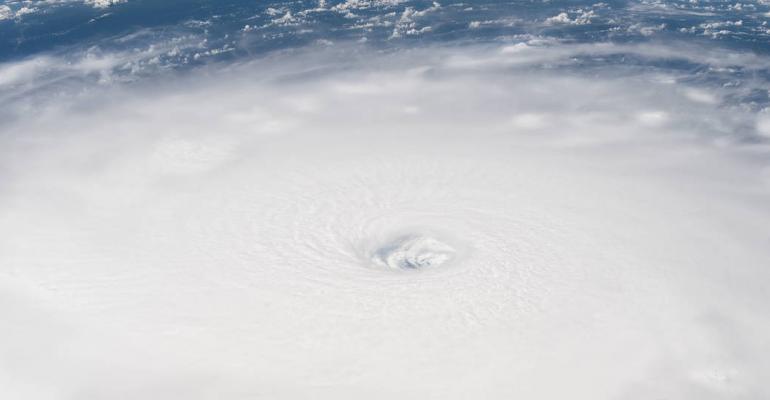 NASA/Editor: Mark Garcia
The eye of Hurricane Irma is clearly visible from the International Space Station as it orbited over the Category 5 storm on Sept. 5, 2017.
Manage>Uptime

As the Climate Changes, So Should Data Center Operations

Critical Thinking: Operators must do more over the coming years to prepare and protect facilities against extreme weather incidents.

The data center industry has devoted a lot of time and resources over recent years to tackling its contribution to climate change.

True, a certain amount of goading was required from Greenpeace and government regulators, but more data center operators now appear to be taking the issue of climate change -- and their role in it -- seriously. It obviously also helps that energy efficiency measures, as well as some renewable energy procurement models, have clear financial benefits for operators. And, it doesn’t hurt that some of the biggest customers of commercial data center providers have made powering their operations with renewable energy a top priority.

However, some data center industry insiders also believe it’s critical to focus on how to make new and existing facilities better able to cope with a future where extreme weather events -- such as this year's hurricanes and floods that kept data center operators on high alert in Texas and Florida and higher global temperatures are the new normal.

Speaking on a webcast this week, Chris Brown, CTO of the Uptime Institute, warned that storms and flooding are an increasing risk to operators and one that they should be taking seriously. “Just ten years ago people weren’t looking to face a 100-year event or a 200-year event year after year,” he said. “Most people were thinking if they dodged the large storm once they were set for the rest of their career.”

Brown argued that hardening facilities against extreme weather and temperatures was not the only issue. Operators also need to put the right procedures in place around data center staffing to better manage extreme weather events. “These last few storms have got people thinking about the operations personnel,” he said. “If you have a major storm coming through, people living and working in that area have their own homes, their own families, their own things to worry about. They are usually going to give those things their attention first before the data center. That is just human nature.”

Often, even the most dedicated staff might not actually be able to get to a facility before or during an event, warned Brown. One solution, especially for companies that have sites in multiple regions, is to bring in staff from a different, unaffected region for support. “That leaves people who are from that region to focus on their families and other issues before focusing on the data center.”

Operators should also be designing power and cooling systems to cope with the long-term consequences of climate change, Andy Lawrence, an Uptime research VP, said.

“We see that operators are not planning for increased heat and humidity, and they are often putting in cooling systems that may not be up for the job,” he said. “It does worry me that the level of foresight and planning isn’t resilient enough. It is certainly a question I would be worrying about if I was building out new facilities, ‘Should we be even more conservative?’”

Lawrence also warned that facilities that rely on cooling equipment that requires large amounts of water – such as evaporative adiabatic systems – could be a liability in the future as water scarcity becomes a critical issue in some regions. “We’ve seen data centers whose designs are highly dependent on water finding that water may not be available, and that creates a lot of problems,” he said.

Another question addressed was whether the move toward hybrid IT – where companies use a mix of on-premises data centers, colocation, and cloud – could actually increase the likelihood of an outage rather than spreading the risk.

According to Uptime’s research, 62 percent of the publicly reported data center outages in 2017 were in facilities owned or operated by colocation and cloud service providers. “To be fair to the cloud and colo providers, they are the most public, so when they have a problem, all of their customers are affected and they start tweeting. It could be that they get a disproportionate amount of publicity,” said Lawrence.

But he added that the Uptime study raised some interesting questions and advised that resiliency strategies should be reassessed. “We are seeing the idea of the single fortress data center, with a disaster recovery site remotely perhaps, changing a lot. Many workloads are going multi-site and moving towards an active-active-active architecture, where at least three active data centers are involved.”

Whether hybrid IT may be making operators less resilient is hard to know. “Has that made people less resilient? I don’t know,” Lawrence said. “However, it has certainly made it harder to know if you are fully resilient or not; and just not knowing is something I think that most CIOs and data center managers would not be comfortable with.”