The company built three solar farms, each valued at around $10 million, as well as a 10-megawatt fuel cell installation, valued at least at $4 million. One solar farm is across the street from the Maiden data center, while another solar farm is in Conover and the third one is in Claremont. The 200-acre array of photovoltaic solar panels serves as a supplement to its utility power feed from Duke Energy as well as  fuel cells from Bloom Energy that use biogas from nearby landfills to generate electricity. Apple says its generation facilities at the Maiden, N.C. facility produce enough on-site renewable energy to power the equivalent of 14,00 homes. 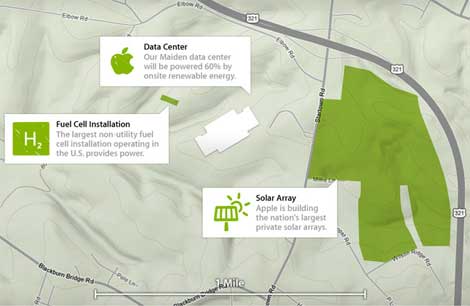 Apple's use of fuel cells also appears to be the largest such facility dedicated to a U.S. data center. The facility uses methane from nearby landfills, which is transported via a natural gas pipeline system. The raw biogas are cleaned and separated to increase the methane content and remove unwanted components (including sulfide, chlorine and sulfur) before being injected into the natural gas pipeline.

Apple's focus on sustainability extends to the construction methods using in building the North Carolina facility. The Apple data center in Maiden has earned Platinum, the highest level attainable under the LEED ( Leadership in Energy and Environmental Design) rating system for energy efficient buildings. The company used 14 percent of recycled materials in its construction process, and diverted 93 percent of construction waste from landfills. Apple also sourced 41 percent of purchased materials within 500 miles of the Maiden site, which reduced the environmental impact from trucking materials over long distances.

After years of criticism from Greenpeace about its dirty footprint, today Apple is actually earning accolades from the environmental group. Here's what Greenpeace says about Apple now: "Apple continues to lead the charge in powering its corner of the internet with renewable energy even as it continues to rapidly expand. All three of its data center expansions announced in the past two years will be powered with renewable energy. Apple is also having a positive impact on pushing major colocation providers to help it maintain progress toward its 100% renewable energy goal."

However, it's taken about four years to silence Greenpeace. The criticism began in April 2011, when the group identified Apple as a leading offender in using energy from “dirty” sources to power its data centers, including coal and nuclear power. The group’s finding relied on an estimate by Greenpeace that Apple would consumer as much as 100 megawatts of electricity at its North Carolina data center. A Greenpeace report was sharply critical of the presence of Apple, Google and Facebook in North Carolina, which it labeled the “dirty data triangle” because of their reliance on electricity sourced by coal and nuclear power.

In April 2012, Greenpeace stepped up its criticism of Apple, issuing a second report, How Clean is Your Cloud?, which received widespread media attention. Greenpeace also staged a protest at Apple's headquarters to draw attention to its critiques of Apple's power sourcing for its data center. Apple was targeted after it had already announced its plans for on-site renewable energy in Maiden, which Greenpeace belittled as enough to supply just 10 percent of the data center's power needs, again citing the 100 megawatt estimate.

But Apple responded by disclosing that will use 20 megawatts of power at full capacity in its North Carolina data center, about one-fifth the amount estimated by Greenpeace. “Our data center in North Carolina will draw about 20 megawatts at full capacity, and we are on track to supply more than 60% of that power on-site from renewable sources including a solar farm and fuel cell installation which will each be the largest of their kind in the country,” Apple said in a statement. “We believe this industry-leading project will make Maiden the greenest data center ever built."

After Apple doubled the size of its planned solar array, Greenpeace offered its first public affirmation of Apple's sustainability initiatives.