Liquid Cooling
brought to you by 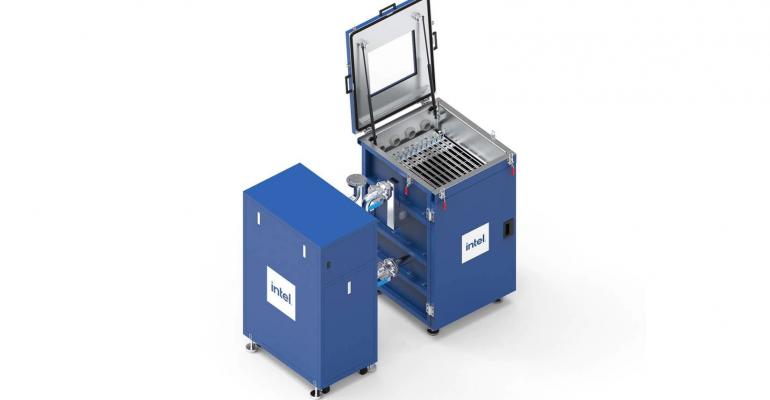 The system will be trialed by Intel Taiwan, with plans to scale out globally.

The company said the initial deployments of the system will take place in Taiwan, with “plans to scale out globally” - but did not specify the extent of this work, or the timeline for the global launch.

On the images shared with the media, the system appears to house 12 servers, and consists of two separate, interconnected cabinets.

Intel said it hoped the design would “simplify and accelerate” the deployment of immersion cooling throughout the data center ecosystem.

The company also announced the launch of a $700 million research and development lab in Hillsboro, Oregon, that will focus on data center sustainability across subjects like immersion cooling, water usage effectiveness, and heat recapture and reuse.

Ahead of the trend

The benefits of this approach include reduced energy and water usage, ability to support much hotter equipment, less mechanical wear and tear, and less noise in the data hall. The main drawback is the necessity to re-architect the traditional data center layout.

Intel has experimented with liquid cooling for a while, collaborating with notable immersion cooling developers like Texas-based startup Green Revolution Cooling (GRC), and its European competitor Submer.

The chipmaker will continue some of this work at the new Hillsboro lab. The 200,000 square foot facility will also host an advanced technology showcase where Intel customers and partners will be able to test Intel products in a variety of data center environments.

Construction on the site will begin later this year, with opening expected in late 2023.

According to a report from analyst firm Omdia, the overall market for data center liquid cooling products is expected to roughly double between 2020 and 2025, growing 16% per year on average.