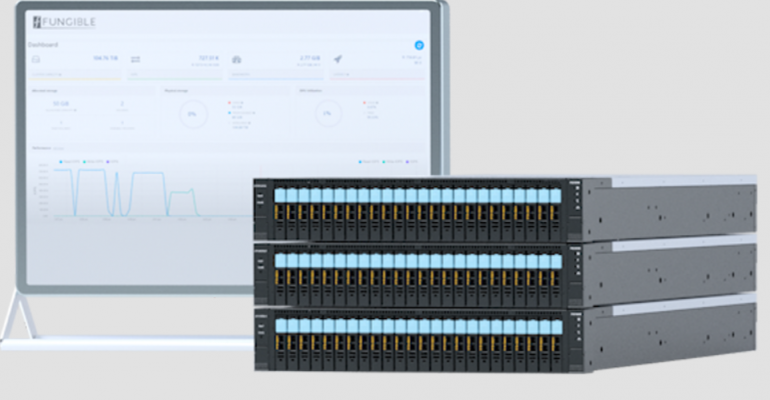 Fungible, the chip startup that says its aim is to put smaller cloud providers on a more equal hardware footing with the likes of Amazon Web Services, has launched its first storage system for data centers, powered by its processors.

The Fungible Storage Cluster, now available, is a hardware-software combination that allows data center operators to disaggregate and pool their storage. The result is the fastest, most cost-effective, secure, and easy-to-use NVMe-based disaggregated storage platform, company executives claim.

“Think of AWS’s Elastic Block Storage (EBS),” Sidney Chow, Fungible’s VP of business development, told DCK. “We are democratizing EBS and offering this to all cloud service providers who want to compete with Amazon.”

Fungible has touted its Data Processing Unit (DPU), which powers the storage cluster, as a revolutionary processor that allows organizations to speed data center performance and operate their data centers more efficiently and cost-effectively.

“We built the storage stack from the ground up. This is not licensing someone else’s technology,” Chow said. “It’s a standard 24-drive SSD box with a 2U form factor. What it can do is support a random read rate of 15 million IOPs, and that is five to 10 times better than what is out in the marketplace today.”

The Fungible DPU, launched in August, is a new category of accelerator processor that takes over data processing tasks, such as storage, security, and networking, freeing up the CPU to focus on application processing.

Now that Fungible has released a storage product, it has to deliver on its promises, said IDC analyst Ashish Nadkarni.

“They can go after cloud service providers, but they need to prove that they can scale,” said Nadkarni, group VP of IDC’s Infrastructure Systems, Platforms and Technologies group. “It’s one thing to come up with a product. It’s another thing to make it work in the field with all the use cases, which is their next big step. I think they will get there, but it’s one step at a time.”

The software-defined storage system, which natively supports NVMe-over-TCP and NVMe-over-TrueFabric – Fungible’s proprietary networking technology – is power-efficient, scalable, and can support thousands of FS1600 nodes in a single storage cluster, the company said.

The second use case is parallel file systems for high-performance computing and artificial intelligence and machine learning applications, he said. As part of the use case, Fungible has partnered with IBM to make its storage system work with IBM Spectrum Scale, formerly called the General Parallel File System.

The third use case is high-performance databases, Chow said.

Besides storage, Fungible plans to announce a host-side DPU product that will run in servers to accelerate compute performance. The host-side DPU will be a PCI card and feature the Fungible S1 DPU, the company said.