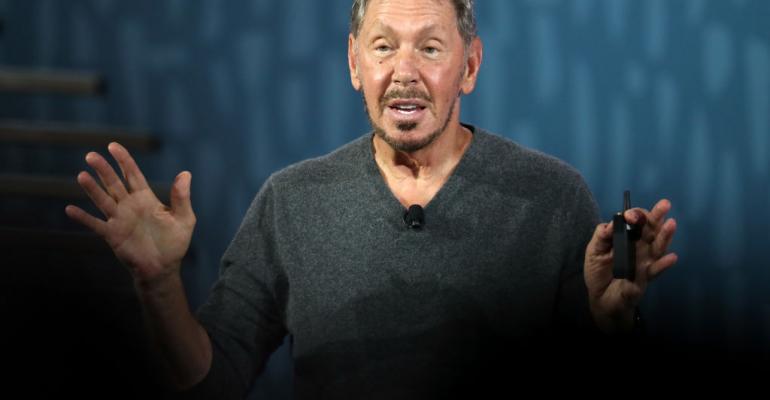 Can Oracle Catch Up in the Cloud Race?

It’s accelerating infrastructure expansion and has a potent technology story to tell, but there’s still a long road ahead.

If there’s a path for Oracle to catch up in the cloud market, the company is taking the right steps – mostly – but the path won’t be short.

It has a potent technology story, which it appears to have successfully told to several big customers. The company has also finally committed to an infrastructure investment of a size that doesn’t leave the impression that it hasn’t quite decided how far it’s prepared to go.

But Oracle Cloud still struggles with messaging, and Larry Ellison, its co-founder and CTO, doesn’t seem to be helping. In his keynotes last week at OpenWorld, Oracle’s big annual conference in San Francisco, he doubled down on bashing Amazon Web Services – he bashed the top cloud provider in previous years too – trying to paint its platform as inferior and less secure than OCI (Oracle Cloud Infrastructure), the second-gen cloud platform Oracle launched three years ago.

While attacks on the top dog make for engaging keynote content, few appear to take the claims of AWS’s architectural inferiority seriously. The common takeaway from private conversations and interviews during the show is that Oracle’s cloud business would be better served by a message that doubles down on showcasing technology and happy customers and not on taking confusing shots at the competition.

To their credit, the company’s engineers and product owners building the platform did spend the four days of OpenWorld explaining the technology to attendees. But Ellison’s keynotes, the show’s most-watched content, were dominated by comparisons between OCI and AWS.

“They have made significant progress since last year,” Gartner analyst and VP Sid Nag said about Oracle. “They definitely have the potential [to gain meaningful cloud market share], but they should lose this mentality of fighting with Amazon. It’s pointless. Focus on your clients, focus on your applications, focus on your cloud strategy and execution, and let the chips fall where they may.”

Leveraging the Install Base

Like other long-time enterprise IT vendors – see VMware and Microsoft (both now Oracle’s cloud partners) – Oracle is leveraging the massive presence of its software in existing customers’ data centers to grow its cloud market share. By making Oracle’s cloud database services compatible with on-premises databases, goes the thinking, the company can remove some friction from moving applications to the cloud.

The strategy has worked for closing big enterprise deals such as the one with the retailer Gap, which has taken a multi-cloud approach, shifting its Oracle databases to Oracle Cloud and using Microsoft Azure for “everything else,” Fakir Nooruddin, Gap’s VP of IT, told us at last year’s OpenWorld. Another thing Oracle had going for it in Gap’s case – and has going for it in closing other big retailer accounts – is that it doesn’t compete with the customer in the retail market like Amazon does. AWS was out of the question for Gap for that single reason, Nooruddin said.

Similarly, refactoring enterprise applications in Oracle’s Fusion portfolio – software like Enterprise Resource Planning (ERP) and Customer Relations Management (CRM) – to sell them as cloud services rather than on-premises licenses makes for an easier transition for existing customers. Last week, Oracle announced an ambitious plan to launch 20 additional cloud availability regions between now and the end of 2020. It plans to deliver Fusion apps as services from those regions at the start, Leo Leung, senior director of product and strategy for OCI, told us.

For customers, moving software their businesses rely on from internal data centers to the cloud is complicated, expensive, and disruptive, so it’s easy to see why a cloud provider that lessens the disruption is attractive. One open question here is whether this install-base conversion from on-prem to OCI will drive enough revenue growth to compensate for Oracle’s steadily shrinking revenue from on-prem licenses.

Also, the cloud database market isn’t sitting and waiting for Oracle to come and take over. Amazon leads in Platform-as-a-Service, with about 30 percent market share to Oracle’s 4 percent, by Gartner’s estimate. And the largest portion of Amazon’s PaaS market share is its database PaaS business, Nag said. Oracle is fifth in PaaS.

In latest episode of "uh huh, keep talkin' Larry," Amazon’s Consumer business turned off its Oracle data warehouse Nov 1 and moved to Redshift. By end of 2018, they'll have 88% of their Oracle DBs (and 97% of critical system DBs) moved to Aurora and DynamoDB. #DBFreedom

Oracle also trails competition in the SaaS market, where Microsoft leads with 17 percent market share, followed by Salesforce with 13 percent and Oracle with north of 6 percent.

The strategy of leveraging on-prem install base to grow cloud revenue, “just moving them from one bucket to another,” does nothing to win “net new customers,” Nag pointed out. “Where’s the growth?”

One big differentiator is bare metal. You cannot rent a virtual server from Oracle, whose cloud infrastructure services were designed from the start for high-performance workloads. It has to be an entire dedicated machine. AWS launched bare metal instances in late 2017, and Azure has yet to offer the option.

Another big differentiator is the SDN (software-defined network) that’s capable of both Layer 2 and Layer 3 networking. The SDN is “an extremely flat, non-blocking, non-oversubscribed virtual relay network that allows us to scale in a really big way,” Patil explained. Additionally, there are no virtualization agents on the servers, which the SDN accesses strictly at Layer 2, making the platform more secure, he said.

In 2017, when the team behind Cisco’s Tetration security platform was looking for the best cloud infrastructure to launch a SaaS version of Tetration, they quickly found that OCI offered the performance and reliability the offering would need, Jothi Prabakaran, a senior product manager at Cisco, told us.

The SaaS would require a lot of raw compute power, since Tetration analyzes customer systems on an ongoing basis and uses machine learning to detect anomalies. It would require bare metal because Cisco wanted full control of the software stack and performance predictability, which is crucial for a security offering. “We need that predictability for security,” Prabakaran said. “We cannot say, oh, we can do a best-effort basis on security. That’s not going to fly.”

Cisco launched the Tetration SaaS into general availability about 15 months ago. Oracle also highlighted a security solution by McAfee and a supply chain management solution by HighJump running on OCI at OpenWorld.

It is use cases like Tetration that Oracle should double down on in its cloud messaging, Nag said, net new customers using the platform because it uniquely addresses a technological need. Oracle would also be well-served by doing away with its aversion to making more of its software available on its competitors’ cloud platforms, he said.

This issue was rumored to have caused the tension between Ellison and Thomas Kurian, the former Oracle product development president, that led Kurian to leave Oracle last year. Kurian reportedly wanted to make more Oracle software run on other clouds, but Ellison wouldn’t budge. Google promptly hired Kurian to lead its cloud business.

Given its dismal market share in the cloud infrastructure (Infrastructure-as-a-Service, or IaaS) market – according to Gartner it doesn’t come close to Google’s, IBM’s, and Alibaba’s, let alone Amazon’s and Microsoft’s – and the fact that it came to market so late that it’s still far from being recognized as a major cloud brand, Oracle has a steep hill to climb if it wants to catch up.

With the big new commitment to global infrastructure expansion in place and impressive new automation capabilities rolled out at OpenWorld, the company now has to focus on execution but also on solidifying its message, Nag said, emphasizing the unique technological aspects of its platform and showcasing customers exploiting those aspects.

And Amazon bashing? Leave that to Donald Trump.