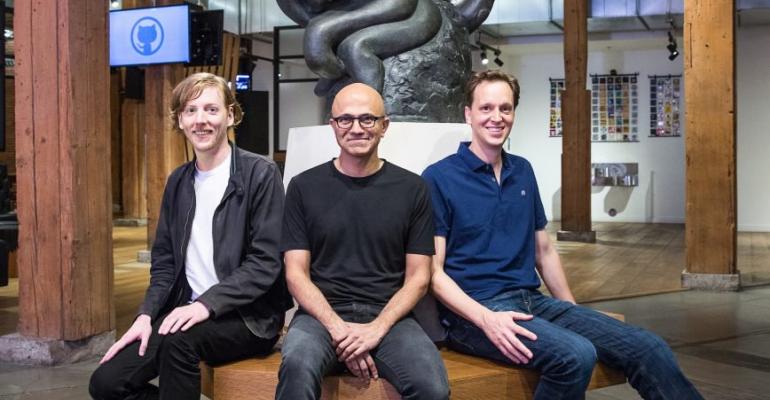 Much open source software is seemingly on the move, as the also-ran GitLab repository benefits from GitHub's sale to Microsoft.

For about ten years, GitHub has been the go-to repository for open source projects. About a year ago, the company reported it had almost 20 million users and 57 million repositories, which made it the largest host of source code on the planet. In large part, this growth came through the courting of the open source community. It's been highly visible at open source conventions, large and small, where it's worked hard to earn the trust of open source developers. Much of that trust has automatically been lost, simply because Microsoft is the new owner.

The problem with Microsoft is the history it shares with Linux and open source. While it's true, as my colleague Richard Hay pointed out in the ITPro Today article announcing the deal, that today's Microsoft "is not your father’s Microsoft," and that under CEO Satya Nadella Microsoft has developed plenty of open source cred, there are many open source advocates who still remember the days when Microsoft was decrying open source as a "cancer" and "communist" and don't trust the company's motives. They remember when open source absolutely couldn't get traction because of the Kool Aid Microsoft was selling.

The Microsoft camp sees this as ancient history and says that open source software is better because of Microsoft's involvement. It's time to let bygones-be-bygones, they say, while admonishing open sourcers to not hold onto the past. Open source advocates, on the other hand, think that Microsoft needs to move a little slower. They see an organization such as GitHub as a key part of the open source infrastructure, and see this purchase as something akin to a once abusive but now reformed person purchasing their ex-victim's house to become the landlord.

"I always want to believe the best in people (and that includes the people running companies like Microsoft)," Linux and open source journalist Bryan Lunduke told ITPro Today in an email. "I spent half a decade working at Microsoft. I have friends there; friends who are advocates for free and open source software. That said, if Microsoft were continuing their well-documented 'embrace, extend, extinguish' strategy, this is exactly what it would look like."

"Embrace, extend, extinguish," a phrase attributed to Microsoft 18 years ago in the United States v. Microsoft antitrust trial, is often repeated whenever Microsoft is seen as getting too chummy with key open source institutions, such as when it became a top level platinum member of the Linux Foundation a few years back.

The phrase was also used by Larry Cafiero, the community-based Southern California Linux Expo's media maven, when we asked him for a comment.

"While Microsoft talks a nice game now with regard to Linux and FOSS, it hasn't really backed it up with significant actions that merit our trust," he said. "So rational folks can assume that the M.O. behind Microsoft's 'embrace, extend, and extinguish' is alive and well, which does not bode well for GitHub."

The actions Microsoft needs to take to "merit our trust" refers, at least in part, to patents. While many open source players have been working to remove the barriers to open source development that come from patent issues, Redmond has a reputation for threatening patent litigation against open source companies.

This was an issue mentioned by Simon Phipps, president of the Open Source Initiave, the organization that approves open source licenses.

"I'd want to know if they are committed to no longer shake down deployers of open source software for patent royalties," he told ITPro Today. "If they are to become host to massive numbers of community projects, the questions I asked in 2016 remain relevant. And I'm not aware they have joined either OIN or LOTN yet."

OIN is the Open Invention Network, an organization that holds a pool of valuable patents to use against any company that threatens to sue the "Linux system," which includes the Linux operating system and various other applications that are considered essential to Linux. LOTN, or LOT Network, gives three free patents to each member to be used to thwart patent attacks by "non-practicing entities" or patent trolls.

"Put me down as positive about the move in isolation, but still waiting for Microsoft to bring the legacy parts of the company into line with open source norms," Phipps concluded. While the acquisition announcement is producing a more measured response than it would have only a few years ago, it's evident that the repository Microsoft gets won't be the repository it purchased -- at least not in terms of the number of projects hosted. Some open source projects are voting with their feet and moving to GitLab, a repository similar to GitHub and built on open source software.

Although it's much too soon to accurately predict the number projects abandoning GitHub for the non-Microsoft alternative, the numbers appear to be somewhat substantial. On Sunday, GitLab posted a tweet with a graph showing a large increase in "imported repositories" beginning on Friday, when rumors of GitHub's purchase first started to circulate. On Sunday, GitLab posted a GitHub-to-GitLab migration tutorial on YouTube that at publication time -- about a day after the video went up -- had over 16,000 views. And Monday, after news of the sale broke, GitLab's site appeared to be having trouble handling the load.

This migration to GitLab was referenced by System 76, a maker of Linux laptops which develops its own Ubuntu-based Linux distribution, Pop! OS, when asked for a comment.

"Congratulations to GitHub," they said in a private message to ITPro Today. "They've built a great product and it shows in its broad adoption. At the same time, many open source projects have already been eyeing GitLab and this is likely the impetus they needed to take a more serious look at migrating to an open source platform."