One of the things that's disappeared during Satya Nadella’s leadership as CEO: the sunk cost fallacy as a business development model. Microsoft continues to take an approach that making mistakes isn't the problem -- refusing to learn from them is.

SEATTLE -- During Microsoft’s annual developer conference this week, the company made multiple announcements around Azure and Microsoft 365. Included were advancements in data storage, machine learning (ML), and the use of artificial intelligence (AI). In fact, not many advancements with Microsoft technologies move forward without some aspect being impacted by ML and AI.

However, these big-ticket advancements would not be possible without a few fundamental changes in the company’s approach to product development. This is no longer the Microsoft that sticks with a certain approach because of its previous capital investments in a product.

The first time CEO Satya Nadella showed his willingness to change directions was just a little more than a year after his tenure as CEO began. At that time, he told employees that the company would take a write-down of $7.6 billion on their April 2014 acquisition of Nokia Devices and Services. Less than two years after that purchase, all remnants of the Nokia deal were wiped clean at Microsoft.

Similarly, we learned that just before the launch of the Surface Mini device, Nadella decided to not announce that new hardware because he thought it did not fill an existing need in the market.

We also know Nadella has not hesitated to de-emphasize the company’s flagship Windows operating system. Last March, a reorganization of the Windows division resulted in Terry Myerson’s departure and moving the core elements of Windows under Scott Guthrie and Azure, while the user experience elements moved under Office product group executive vice president Rajesh Jha to focus on experiences and devices.

There are other examples of these type of moves by Nadella such as investing heavily into the process of getting Microsoft products and services on platforms such as iOS and Android. This week we also heard that the company was continuing their work on the Windows Subsystem for Linux (WSL) with the release of its second-generation version. Plus, the announcement that the Linux kernel would be coming to Windows 10 demonstrated that Microsoft's committed to good relations with the open source community.

Microsoft's willingness to take a new approach to support technology within and outside its native ecosystem is becoming a refreshing and popular part of the company’s approach.

Let’s begin with the company building a new version of their Edge browser using the open source Chromium rendering engine. Public access to canary and developer builds started last month, and three new features were unveiled this week in Seattle at Build. The company’s investment in this new version of Edge shows that Microsoft realized the semi-annual update cycle of original Edge, which was directly connected to the operating systems update cycle, put them way behind competitors such as Chrome and Firefox.

By breaking Edge out of the operating system, Microsoft can iterate much faster with canary builds arriving every day and developer builds being released weekly. It will also enable the company to make the Edge browser available to all supported versions of Windows, MacOS, and possibly even Linux.

I heard from more than one Edge team member this week that Microsoft is really embracing this new update cycle for Edge (Chromium). 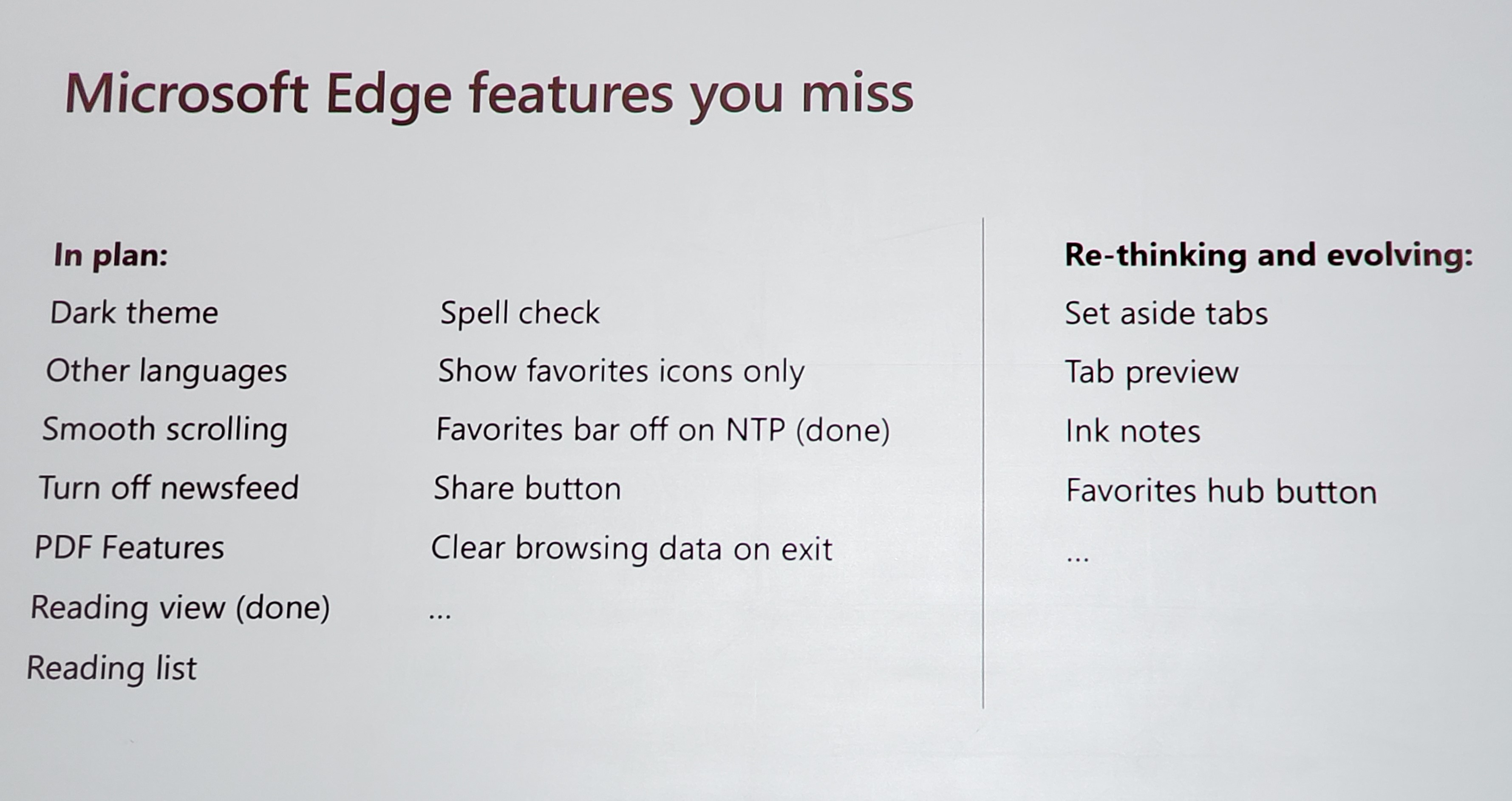 The Edge team also shared details of their Edge (Chromium) roadmap. While planning to incorporate many popular Edge features into the Chromium version of Edge, the team is also willing to take a hard look at some features after assessing feedback from customers and users.

Microsoft has also decoupled various WinUI elements from the semi-annual update cycle of Windows 10. Previously developers had to be concerned about what feature update their customers were on in order to implement some app features. If a new feature was made available as part of a certain feature update, it was typically not backward-compatible with other feature update releases because of the tooling changes in the latest release of the SDK tied to that feature update. Now, with these and other developer elements being moved to GitHub and outside of the semi-annual update cycle of Windows 10, new features and enhancements can be implemented by app developers and will work on devices running all supported feature updates on Windows 10.

In addition, Microsoft has also shifted its focus away from encouraging developers to build Universal Windows Platform (UWP) apps for the Microsoft Store. In fact, it has have opened the ability for developers to use tools like XAML Islands and the open source WinUI Library across existing WPF, WinForms, and native Win32 software to build richer UI experiences for their customers no matter the app delivery method. This means access into the unique aspects of Windows 10 is more readily available to more developers – not just those building UWP apps.

All these examples show a couple of things about today’s Microsoft.

First, the company seems to be admitting that its semi-annual Windows as a Service (WaaS) approach is not being embraced fully as they may have hoped, especially by enterprises and other customers. Enterprise customers can now remain on the fall feature update for up to 30 months.

Second, there are no off-limits entities within the company. Even the flagship Windows operating system can be split up with different aspects placed in separate business units to develop and maintain the OS. In addition, although not formally announced to the public, changes to releasing big feature updates twice a year seem to indicate that there may be more time spent on stability during at least once of those two semi-annual updates for Windows 10.

At this point, five years after he became the CEO, Satya Nadella's leadership impact across Microsoft is no longer a surprise. His willingness to revisit previously-held tenets to ask if it's still worth doing things that way is now Microsoft's willingness to adapt as necessary. It’s cliché but this is not the Microsoft we have seen in the past and in this case that is not a bad thing at all. Enterprise customers should be able to have more faith that if a certain approach is no longer working that the company will be willing to listen to customer feedback and adjust course rather quickly.

Check out all our Microsoft Build 2019 Coverage