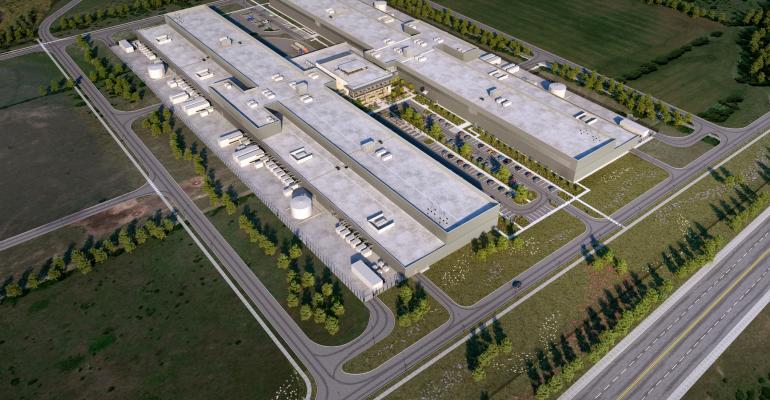 Meta
A typical Meta hyperscale design - this one is being built in the City of Temple, Texas.
Companies>Meta (Facebook)

Local opposition might have killed what experts describe as a very efficient facility.

An enormous data center that climate activists stopped Facebook parent Meta from building in Holland had met environmental conditions set by the government and so was clear to proceed, claim local officials.

The government said it would not permit the hyperscale data center to be built unless it met strict environmental conditions, after green campaigners protested last year that it was too big, and would consume too much electricity, too much water, and too much land that they believed should be preserved for agriculture.

Local officials working with Meta on the data center plans claimed that it met the government conditions in a formal statement to the Dutch Central Government Real Estate Agency (RVB), whose assessment will determine whether construction is permitted to proceed.

"We assume that we have fulfilled the central government's questions properly, and that we can meet the conditions set. This is stated in our letter to the RVB," Alderman Jan de Jonge, who is responsible for the project at the Dutch municipality of Zeewolde, told Data Center Knowledge in a written statement.

Green political opposition to the data center had become so intense last month that Meta shelved the plans, even while Zeewolde was preparing to tell the Dutch government assessors that it met their environmental conditions.

A spokeswoman for Jonge said Zeewolde had asserted in its statement to RVB that the data center met the conditions, and that it had met three of four core demands in plans the municipality had agreed with Meta before the government intervened last year.

Foremost was a demand that the data center meet an operating efficiency of 1.1 PUE, a measure of how much energy it takes to cool a data center's computer equipment when it is running, and a gauge of power efficiency. The government said also that the facility must use minimal water in the cooling system. And that any heat exhaust from this process must be made available to a district heating system for local homes.

Local officials told the government that Meta data centers were already routinely meeting energy efficiency ratings of 1.1 PUE last year, when protesters were calling for the project to be scrapped, a rating experts say would put the site among the world's most energy-efficient. Meta claims the cooling system it designed to achieve this uses 80% less water than is typical for data centers. The plans already incorporated designs to make exhaust heat available for the local authority, whose regional development plans involved expanding its own housing, and linking its district heating to nearby boroughs.

The government's final demand was that the building roof and walls should carry a small solar farm, to address environmentalist's complaints that data centers consume too much local energy, even though Meta had pledged to run the site entirely with renewables it buys from North European countries that have ample supply.

Zeewolde protested that the data center's roof couldn't accommodate a solar farm because it would be full of cooling equipment needed to meet the demand that it reaches a world-class PUE, and uses minimal water. Zeewolde and Meta proposed to put solar panels over 13 hectares of land beside the data center instead – as much in surface area as the roofs and walls could provide.

The Zeewolde spokeswoman insisted this would not interfere with another demand the municipality made of the data center itself, but which had not been included among the government conditions: that the site's surrounding land be made into a "biodiversity intense" protected natural habitat. 17 hectares would still be preserved for nature, she said.

With an estimated total power capacity of about 158.5 MW, the 13 ha solar farm would supply only around 8% of the data center's energy.

Zeewolde made the solar accommodations in an additional agreement it signed with Meta, after the government imposed its conditions last year. But a summary of the agreement made no mention of the government's PUE requirement or its demand for minimal water use. The government said its demands should be formalized in an agreement with Meta.

Energy experts told the municipality in a public meeting last year that PUE was a discredited measure of energy efficiency, the spokeswoman said. Last January, an Environmental Impact Assessment of the project predicted a PUE of 1.15.

Niek van der Pas, lead data center expert at Minkels, an engineering firm that helped formulate the Dutch government's data center strategy in 2019, said a PUE that bettered 1.1 would be state-of-the-art, and to cut 80% of water use would be impressive. He agreed that immersion cooling promised similar efficiency with less water, but the technology was still in development stages.

John Booth, a green data center expert who chairs the British Standards Institute committee on data center design, said Meta's Zeewolde project, if it went ahead, would be "the last hurrah of the air-cooled data center".

"Because the future is clear, we've got to go immersed compute," he added.

Booth agreed PUE was a controversial metric. But he believed Meta could do more to accommodate Dutch environmental demands.

"Facebook is notorious for creating a cookie cutter design in the US, and then basically dropping it wherever they drop it, without really looking at the local conditions," he said. "I've seen the plans for this. And it's exactly the same plan as you'd get for any of the data centers that they build in the US. I personally think it's quite an arrogant approach," he said.