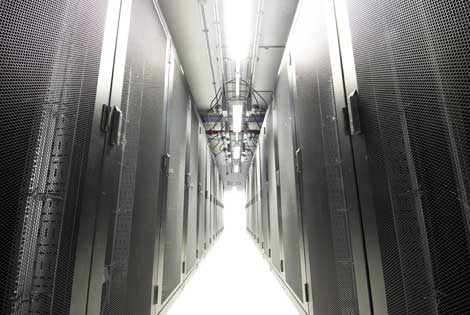 The fully-contained cold aisle inside the data center modules at the Merlin facility operated by Capgemini.

The Capgemini modules use adiabatic cooling, a method of evaporative cooling in which fresh air from outside the data center passes through a filter that is wet, and the air is cooled as it passes through it (as some of the water evaporates). A similar system has been used in modular data centers from SGI and Microsoft. 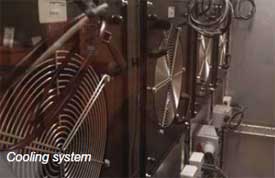 There are no raised floors or ductwork. Once the fresh air has been cooled, it passes through a wall of 12 variable-speed fans and into a "cool corridor" running the length of the module. The corridor is lined with several rows of equipment rooms, which are enclosed using a cold-aisle containment system. The pressurized air enters the equipment rooms through louvers that can control the flow, pass through the equipment and then into a hot aisle.

The data center is equipped with sensors tracking temperature, humidity and air pressure, which all report back to an intelligent management system. Capgemini’s consultants worked with a global Building Management System (BMS) company to design a new independent BMS for the modules. The BMS can detect changes in conditions within the module and adjust the variable-speed fans that move the air around the modular computer hall.