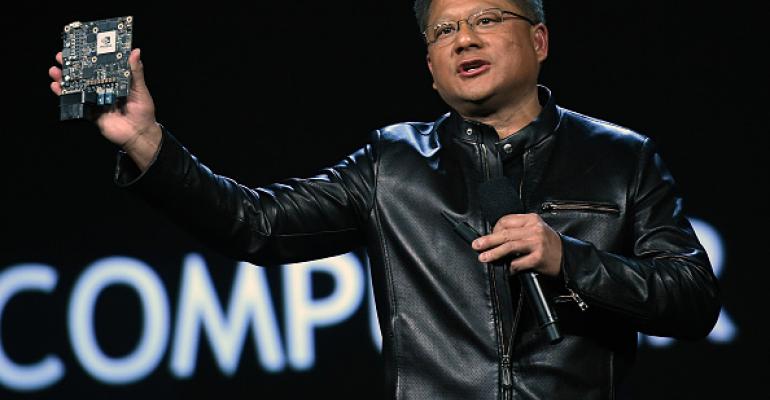 “It’s not just about hyperscalers any more, it’s about startups and industry.”

Revenue will be $3 billion, plus or minus 2%, in the fiscal first quarter, the Santa Clara, California-based company said Thursday in a statement. That compares with an average analyst estimate of $2.84 billion. Gross margin, or the percentage of sales remaining after deducting the cost of production, will be 65%, plus or minus 50 basis points.

After slowing investment in their infrastructure last year, owners of the giant data centers that power internet services are spending again, including increasing their deployments of graphics chips used to boost artificial intelligence calculations. Nvidia, the biggest maker of graphics chips used in gaming personal computers, has adapted its technology for the AI market, creating a new multibillion-dollar business. Chief Executive Officer Jensen Huang said the use of such computing is spreading, making growth less reliant on the spending plans of a handful of companies.

“It’s not just about hyperscalers any more, it’s about startups and industry,” Huang said in an interview. “I’m very confident that the future of computing will involve accelerated computing.”

Nvidia shares rose about 8% in extended trading following the report. Earlier, they closed at $270.78 in New York. The stock has jumped 77% in the past 12 months.

Huang has built Nvidia into one of the most valuable tech companies by finding new customers for gaming chips. The ability of these components to do calculations in parallel makes them useful for AI workloads and, potentially, self-driving vehicles.

The majority of the company’s sales still comes from PC gaming, where Nvidia’s graphics chips create the most realistic experiences. Top-of-the-line GeForce parts cost more than many consumers spend on a whole PC.

Profit in the fiscal fourth-quarter was $950 million, or $1.53 a share, compared with $567 million, or 92 cents a share a year earlier. Revenue surged 41% to $3.1 billion and profit excluding certain costs was $1.89 a share in the period ending Jan. 26, the company said. Analysts, on average, had predicted earnings of $1.66 a share on sales of $2.96 billion, according to data compiled by Bloomberg.

Gaming sales in the quarter jumped 56% from the same period a year earlier to $1.49 billion. Nvidia’s Data Center unit contributed $968 million, a gain of 43%, according to a presentation posted on its website. Automotive-related sales were flat.

The company said it is likely to close the acquisition of Mellanox Technologies Ltd. in the “early part of calendar 2020.” Discussions with Chinese regulators about the transaction are progressing, it added. Share buybacks will resume after the completion of the deal, Nvidia also said.