Of all the facilities in "Platform Equinix," the NY4 data center in Secaucus, New Jersey is the busiest. More than 450 customers conduct business within the 340,000 square foot facility, which houses infrastructure for major financial exchanges. These exchanges serve as "magnet" customers, attracting an ecosystem of brokerages, investment banks, hedge funds and firms specializing in high-frequency trading (HFT).

The facility was built in 2000 as an eyeglass factory, which later was closed. Equinix, a colocation provider that already operated its NY2 data center down the street, bought the building in 2006 and opened the first phase of NY4 in November 2007. The data center was built out in three phases, with each 96,000 square foot data hall support infrastructure. A fiber ring connects NY4 with Equinix's two other facilities in Secaucus, NY2 and NY5.

Data Center Knowledge recently got a look inside NY4. With this photo tour, we take you inside the massive building for a closer look at its infrastructure: 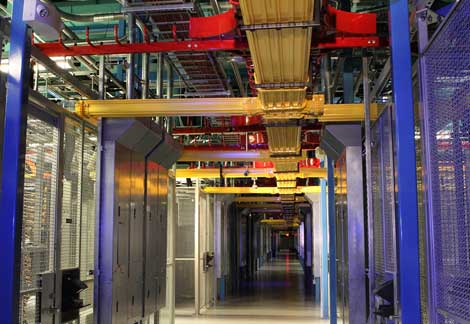 The long main corridor of the Equinix NY4 data center in Secaucus is lined by cages on both sides, with fiber running between the cages and cabinets via the yellow overhead cabling trays. (Photo: Equinix) 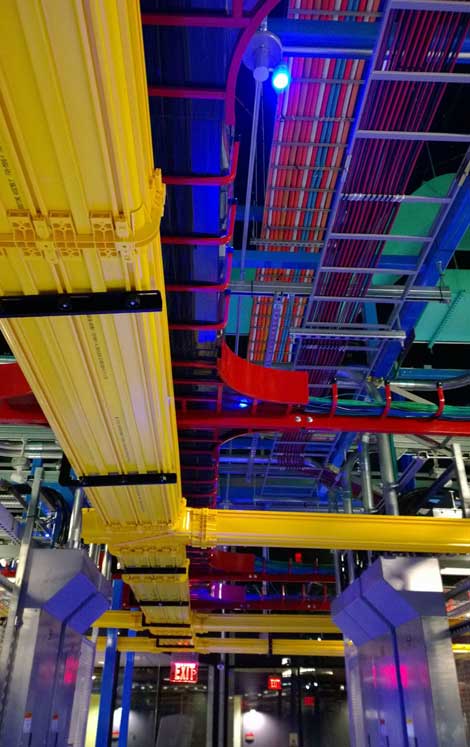 The 40-feet ceiling provides plenty of space for the multiple tiers of cabling trays that populate the upper area of an Equinix data center, which includes separate trays for cross-connects, carrier fiber and power cabling. (Photo: Rich Miller) 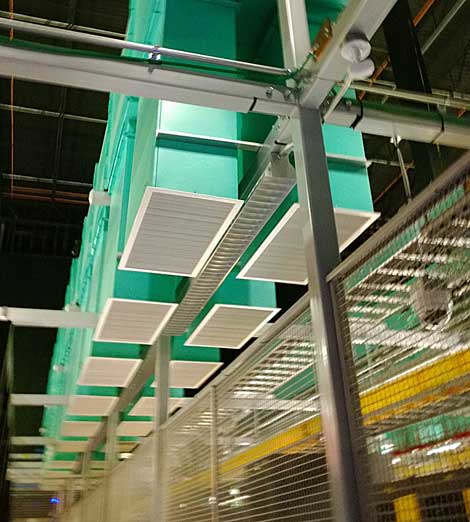 Equinix uses a slab rather than a raised floor, with cooling provided via an overhead duct system. Large air handlers can move 70,000 cubic feet of air per minute into the overhead ducts, which then branch into these vertical diffusers that descend and drop the cold air into the data hall at a height of about 12 feet. (Photo: Rich Miller) 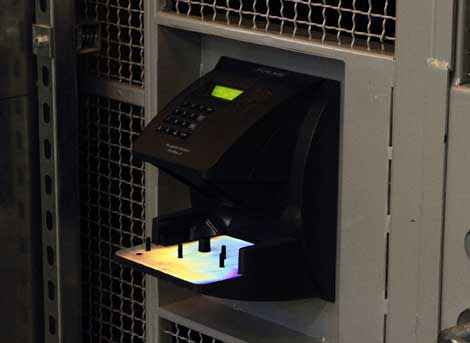 Each Equinix data center features at least five levels of access security, using a combination of keycards, a "man trap" corridor, biometrics (like the hand geometry reader shown above) and security at the cage and cabinet level. (Photo: Equinix)

NEXT: The Power Infrastructure 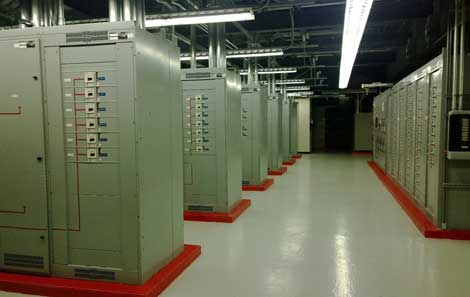 The power room at the Equinix NY4 data center, which is supported by a 26kVA substation. The facility has 30 megawatts of UPS support to keep the IT equipment running in the event of a utility power failure. (Photo: Rich Miller)

In the event of a utility outage, the NY4 facility is supported by 18 of these 2.5 megawatt Caterpillar diesel backup generators, which provide a total of 46 megawatts of emergency power - enough to provide power for the facility's full IT load, as well as the chillers and UPS systems. During Superstorm Sandy, these generators kept the facility running for an entire week. (Photo: Rich Miller) 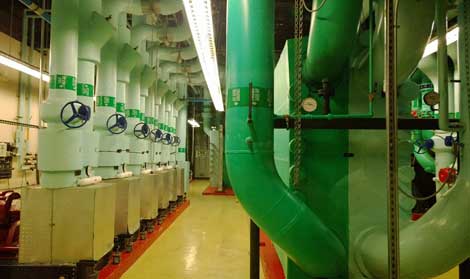 The chiller plant at NY4 features massive pipes to move chilled water through the facility, as well as a flate plate heat exchanger (at right) that provides cooling during winter months, allowing Equinix to save energy that would normally be used to run chillers. (Photo: Rich Miller) 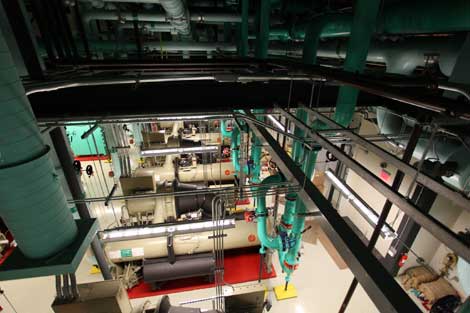 An overhead view of the chiller room at the Equinix NY4 data center in Secaucus. (Photo: Equinix) 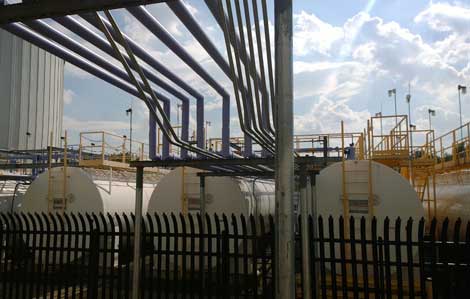 The outside equipment yards at Equinix NY house six 30,000-gallon tanks to store diesel fuel for the emergency backup generators, providing 180,000 gallons of fuel to sustain the facility during a utility outage. During Superstorm Sandy, the tanks were refilled on a daily basis, with some diesel supply trucks coming from as far away as Maine and North Carolina. (Photo: Rich Miller) 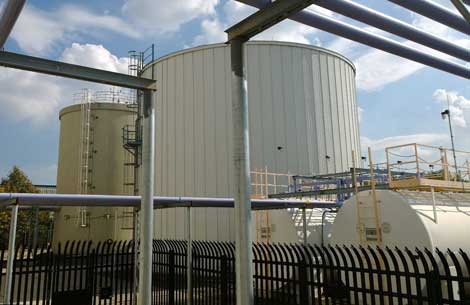 Two huge tanks in the equipment yard support the cooling systems. The white tower is a 500,000 gallon tank storing reserve water. At left is a 140,000 gallon tank that provides thermal storage. The tank is filled with chilled water kept at 46 degrees. If the chillers go offline, the chilled water can be used to support the cooling system. (Photo: Rich Miller)