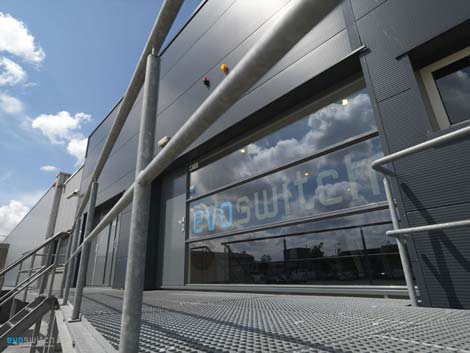 The entrance to EvoSwitch, a climate neutral data center near Amsterdam.

Neutrality is proving to be a winning business concept for EvoSwitch, which is doubling the size of its Amsterdam data center to meet customer demand for space in its carrier-neutral and carbon-neutral facility. EvoSwitch 100,000 square foot (9,285 square meter) data center houses the European infrastructure for Wikipedia. "EvoSwitch’s energy-saving measures, combined with their use of green energy and CO2 compensation are very attractive to us,” said Brion Vibber, Chief Technology Officer for the Wikimedia Foundation.

EvoSwitch is supported by 20 megawatts of power capacity that is generated entirely from sustainable sources by Delta power, which uses a mix of solar, wind and biomass in its power generation. EvoSwitch also works with the Climate Neutral Group to purchase offsets for the CO2 emitted by its generators and on-site parking, making EvoSwitch a climate neutral data center. On the following pages, Data Center Knowledge gives an overview of additional techniques EvoSwitch is using to reduce its energy use in the data center.