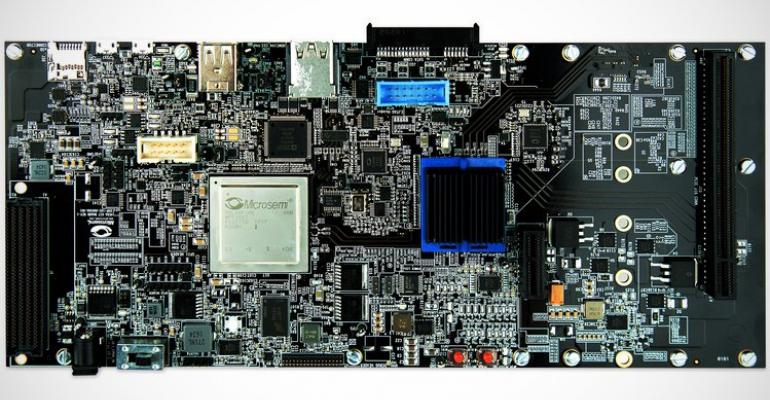 SiFive Releases 'Expansion Board' to Build Interest in RISC-V Processor

Fabless processor designer SiFive is removing more roadblocks to developers wanting to build applications for its open source RISC-V processor. In March the company raised over $143,000 in a crowdfunding campaign, in which it took pre-orders for HiFive Unleashed, a $999 single-board computer for developers featuring the most powerful RISC-V system-on-a-chip to date, the Freedom U540, a multi-core processor that clocks in at up to 1.5 GHz.

Earlier this month, SiFive collaborated with the Southern California-based processor maker Microsemi to sell a limited number of HiFive Unleashed Expansion Boards at $1,999 apiece, or a bundled set that includes the expansion board and the previously offered SBC for $2,998. So far, they've sold seven of the expansion boards and four bundled sets, taking in $25,985.

The expansion board plugs into HiFive Unleashed to increase usefulness of the SBC to Linux IoT developers, partly by giving devs a full PC-like experience. SiFive and Microsemi hope it will aid designers in developing Linux apps for embedded devices.

Although being sold through a crowdfunding site, this isn't about raising money. It's about getting the technology in the hands of the right developers.

Manufacturing chips for sale isn't SiFive's business model. While the company does sell chips on its website, they're basically samples, or templates, offered as a way for companies to take the architecture for a test drive. Its business is helping customers design and manufacture their own RISC-V-based chips to use in devices they're bringing to market, which allows for more innovation, since the devices aren't being designed around one-size-fits-all chip designs from the likes of Intel, AMD, and ARM.

The idea is that customers get chips customized for their needs at about 10 percent of the cost of bringing a processor to market using traditional methods. In addition, because RISC-V is licensed under the "permissive" BSD license, customers can make these customized chips proprietary and part of their IP portfolios.

Until the release of the U540 multicore SOC late last year, RISC-V chips were relatively small and designed primarily for microcontroller use in IoT devices. With U540, the company ups its game with silicon that's capable of more, although CEO Naveed Sherwani indicated to Data Center Knowledge in April that its focus remains on the IoT market.

That may or may not be true. Like ARM processors, the U540 sips power, and they already seem capable of doing the type of heavy lifting required of servers. Sherwani told us it would be years before that's possible, but this year two Linux distributions, Debian and Red Hat's Fedora, have been ported to run on the architecture.

"The HiFive Unleashed can run in command-line mode, either via a serial terminal (over the USB serial chip on board) or via Ethernet (via SSH, telnet, etc.). It can also run in a graphical mode via the Ethernet port, via something like VNC," Palmer Dabbelt, system software team lead at SiFive, told Data Center Knowledge this week in an email exchange.

"The expansion board allows for the addition of a PCI-Express graphics card (as well as a PCI-Express USB card), which makes the setup feel much more like a proper desktop PC," he added. "We had a demo of this running at the RISC-V Workshop in Barcelona: there was a graphics card, a USB keyboard/mouse, and networking via Ethernet. We ran Debian on the board and showed a web browser running some common websites (Twitter, YouTube) as well as some desktop apps (games, webcam), and the resulting experience felt like using a desktop."

The RISC-V looks as if it's on it's way to becoming a disruptive force, at least for devices operating at the edge. In November, Western Digital announced a shift of its entire product line to the architecture and said it planned to ship about a billion RISC-V cores in 2018, a figure it expects to increase to about 2 billion within a couple of years.