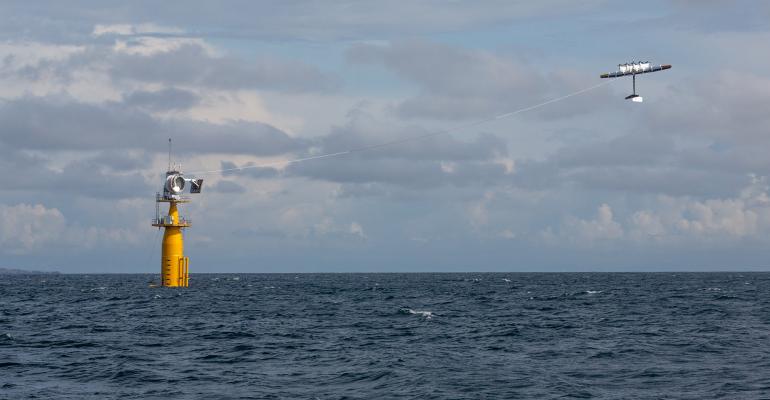 Google/Makani
According to the Makani website, the company successfully demonstrated its airborne wind power system offshore in 2019.
Companies>Google (Alphabet)

“Despite strong technical progress, the road to commercialization is longer and riskier than hoped..."

Mark Bergen (Bloomberg) -- Alphabet Inc. is shutting down Makani, a subsidiary working on wind energy, as Google’s parent company pares back its experimental technology in favor of its main internet business.

Makani was formed in 2006 to make flying kites that would harness wind power and, eventually, replace more expensive turbines. Google acquired the startup in 2013, placing the group inside its X lab with other “moonshots” like self-driving cars. Makani later became its own Alphabet unit. But the initiative suffered personnel problems and waning support from its parent company, which has pulled back on several green energy projects.

“Despite strong technical progress, the road to commercialization is longer and riskier than hoped, so from today Makani’s time at Alphabet is coming to an end,” Fort Felker, Makani’s chief executive, wrote in a blog post. Astro Teller, the head of X, said the lab will be “redirecting resources to more promising areas.”

Economics didn’t help Makani’s commercial odds. Since it began, the cost of wind energy has fallen dramatically, making it harder to sell novel clean energy technology, said Saul Griffith, one of Makani’s co-founders. “Very few people have been given the opportunity to swing for the fences with regard to climate change,” said Griffith, who now runs the energy firm Otherlab. “This is something they should be proud of.”

Alphabet’s “Other Bets” divisions includes a handful of audacious projects, like drones and life extension. Last quarter, the company had capital expenses of $86 million on those units compared with $6.6 billion on Google.