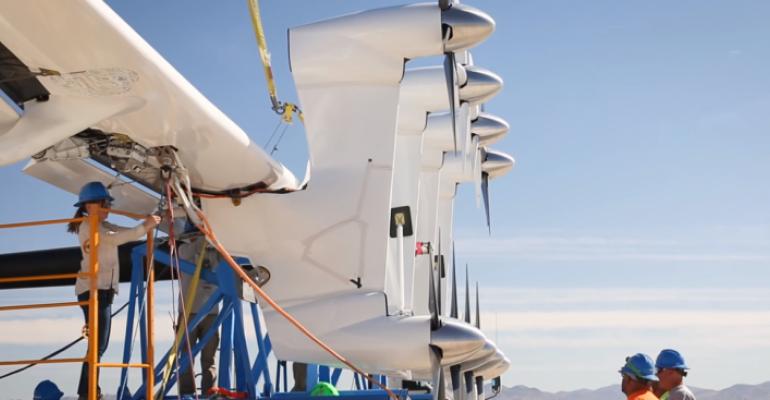 Makani
A Makani kite being prepared for take-off
Energy

Mark Bergen (Bloomberg) — On May 16, Makani released a YouTube video. A camera pans on a T-shaped airplane, with wings stretching 85 feet holding eight small turbines and a tether connecting it to a tall ground station. The plane swoops into the air. It dips and soars, looping elegantly in circles that mimic a windmill, something it was built to replace.For more than a decade, engineers have been building this “energy kite” to harness wind power with 90 percent fewer materials than conventional wind turbines. But Makani, one of the oldest green-energy projects at Alphabet Inc.’s X research lab, is struggling to take flight. Support from its parent has waned in recent years, according to multiple people who have worked at and with the company. Several key Makani members have left. A former executive called it a “shell” of its former self. The people asked not to be identified discussing private matters.

The story of Makani is part of a broader struggle at Alphabet to develop clean energy technology with climate-saving promise. The tech giant is the largest corporate consumer of renewable power, and it continues to explore renewable ideas. But since Makani joined X in 2013, Alphabet has canceled or let languish an effort to create a smart grid system, a way to make fuel from seawater, and floating solar panels, a project that hasn’t been reported before.

For some, this is the result of Alphabet’s naïve approach to the field. “The reason they’re doing it is arrogance, not expertise,” said Saul Griffith, a co-founder of Makani who left the company in 2009. “It’s the triumph of novelty over rigor.”

Still, executives at X say they’re committed to the field. “It is hard, and many other people have given up,” said Obi Felten, a director at X. “If we don’t solve it in our generation, many other things will become irrelevant.” In July, X spun out a new drilling technology for geothermal home heating, a less-ambitious endeavor called Dandelion. Another early-stage X idea, code-named Malta, aims to store renewable energy with molten salt.

Astro Teller, the head of X, said Makani is transitioning out of a “building phase” to deployment. The team flies their kites regularly, looping them at different diameters, speeds and angles. “They have this year been very aggressively out testing,” Teller said in a recent interview. “They now do, every four to six weeks, what would have been a miracle last year.” Google co-founder and Alphabet president Sergey Brin said the company continues to be excited about airborne wind energy “and Makani has demonstrated incredible progress in that respect.”

See also: Google Will Be Powered Completely By Clean Energy in 2017

But Teller stressed that Makani’s mission — finding a new way to generate energy — is now just part of an array of efforts to combat climate change. Solar and wind energy are plentiful. Larger hurdles, and larger markets, exist in cutting the inefficiencies in using, transporting and storing energy. Making new, renewable energy is less of a moonshot (X’s raison d’être). “To the naïve observer, that looks like the world of solving climate change,” Teller said. “It’s not a rounding error, but it’s only one of the factors.”

Makani first connected with Google in 2006, when energy markets — and the internet search giant — looked very different. Like Google’s founders, Makani’s creators were unorthodox. Griffith, a MacArthur fellow, tinkered with homemade kite-powered surfing. Don Montague, his co-founder, raced them professionally. The pair hired fellow novelty sailing enthusiasts and eccentrics. Makani, which means “wind” in Hawaiian, ran out of an old naval air station in Alameda, California. Corwin Hardham, a third founder, told reporters he wind-surfed and paddle-boarded to the office.

Google’s founders Brin and Larry Page met Griffith at a TED Conference and Montague while kite-surfing. The internet billionaires invested $10 million in Makani in 2006. Another $5 million came from the philanthropic arm, Google.org, in 2008. Then the financial crisis hit, putting steady funding for Makani on ice. Montague and Griffith left, leaving Hardham in charge. Tests to develop working kites continued. But tragedy struck in October 2012: Hardham died, at age 38, of a chronic heart condition.

“Those six-to-twelve months after Corwin passed were very hard for a lot of people,” said Gia Schneider, Hardham’s partner at the time. Hardham handled fundraising, and the employees worried the company might shut down in his absence. But about six months after Hardham’s death, Google swooped in and acquired Makani outright.

After the deal, Google made Makani a “moonshot” at X , squeezing it in with the self-driving cars, high-altitude internet-beaming balloons and Google Glass. Green energy partners and associates stopped hearing from them. “Once things go inside Google, everything gets super, super secret,” said Zoi. The last time she saw Makani’s plans, in 2013, she said it had a “plausible roadmap” to commercial deployment.

Inside X, Makani received the gospel of “10x” — an edict from Page and Brin to produce tech ten times better than what’s currently out there. Still, Makani was relatively small. Its budget clocked in around five percent of the overall X budget of $500 million in 2014, according to one former executive who did not want to discuss internal issues publicly. Headcount rose and the unit was pushed to craft ambitious deals with utility companies, sometimes ahead of the technical schedule of its product, this person said.

Other X projects, like its life sciences and driverless car teams, cut partnership deals before spinning out from the lab. Makani completed its first test flight with a commercial-scale kite late last year and has done dozens more since, but it hasn’t begun supplying energy to any utilities yet. The companies Makani deals with are more conservative than those in most other industries. Teller attributed reluctance to embrace new technology in the sector to the need for “bankable” projects. New energy generation methods must pretty much be guaranteed to work to reward utility investments that typically take many years or decades to produce returns, he explained. “It’s a somewhat risk-averse industry,” he said.

Energy markets have moved against Makani, too. The cost of producing wind energy has dropped below where several early members of Makani expected. And the price of wind turbines has fallen about 35 percent since 2007, according to data compiled by Bloomberg New Energy Finance. That hurt Makani’s odds of offering a service that competes with turbines, according to a former senior executive at Alphabet who worked on energy projects including Makani. “This is a tough order for emerging tech to meet,” said Bloomberg New Energy Finance analyst David Hostert. An X spokeswoman said Makani isn’t competing directly with turbines because its system can be installed more easily in less-accessible areas, like mountainous regions.

Makani staff numbers have fallen from well over 100 to below 50 in the past two years, according to two former employees. Most of its pioneering members have left. Montague leads a firm making water vessels driven by kites. Griffith runs Otherlab, a robotics and environmental research company. The X spokeswoman wouldn’t disclose Makani’s headcount, but confirmed that it has declined as Makani moved from kite building to testing, which requires fewer people.

Other energy efforts across Google have also struggled. One is code-named Horizon, a project testing solar panels that rest on reservoirs, harnessing energy from both the sun and water, an approach others have tried with limited success. Horizon’s fate is uncertain, according to three people with knowledge of the project. X’s Felten declined to comment on Horizon. Another Google project tried to build software and equipment to manage power lines for utilities or a smart grid. That was shelved after the creation of the Alphabet holding company in 2015, according to three people familiar with the company.

Then there was Foghorn, a two-year X effort to turn seawater into a new liquid fuel. That was shut down in 2016 after failing to reach a price point to compete with traditional fuels. Kathy Hannun, leader of Foghorn at X, went on to form to form Dandelion, the geothermal spinoff. She stressed that Foghorn folded due to market dynamics, not a lack of support from X for renewable energy. Many of X’s most ambitious projects are expected to hit dead-ends. “That’s just the nature of the place,” she said.