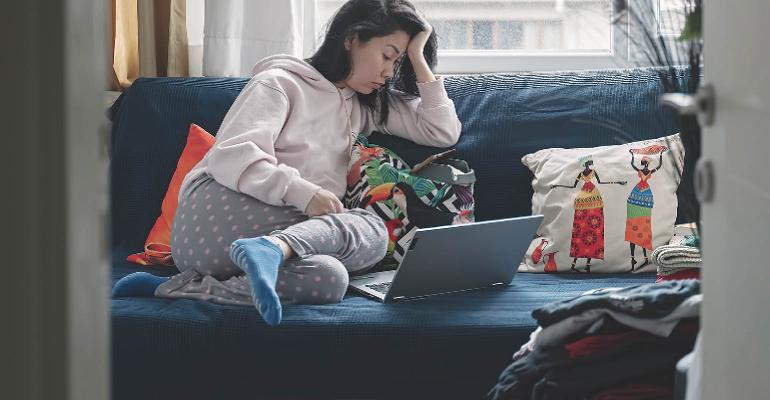 Say Hello to the Flexetariat, Empowered Employees Who Want a Change

The desire for flexibility, an employee-employer power shift and the death of the commute are defining the latest work era.

(BLOOMBERG) -- The future of work was foretold half a century ago, not in commerce but in art.

In Belgian surrealist René Magritte’s 1953 oil painting “Golconda,”  a throng of identically dressed men in trench coats and bowler hats fill the sky, framed only by buildings. They exist in tight, monotonous formation. Only on close inspection can you see any individuality on their faces. The suggestion of office life as surreal imprisonment is clear.

Related: Uptime Says the Data Center Staffing ‘Crisis’ Doesn’t Have to Be a Crisis

In 2022, the prisoners have jumped the barricades. The air is full of The Great Resignation and Quiet Quitting. Nearly half of senior HR leaders surveyed by consulting firm Gartner Inc. are now concerned by “mass turnover events.”  Gone are the assumptions of an era the painting captured: capitalism’s soaring postwar ambition, when professional and technical work quadrupled. When wearing the white collar of a suit and tie (versus the blue collar of manufacturing overalls) brought higher earnings and status. When conformity and a daily commute into gleaming city skyscrapers were a price worth paying for the promise of promotion.

Before the Covid-19 pandemic, 8% of professionals in knowledge work worked from home. By the second quarter of 2020, the International Labour Organization estimates that an average of 17.4%, were working remotely.  Statistically it takes 66 days to establish a habit: by spring of 2022, when a permanent return to working life looked possible in the majority of countries, 700 days had passed since the start of pandemic. New habits had been established in people’s lives, new arrangements for childcare as well as new relocations. And something else besides: reevaluation.

Microsoft’s Work Trend Index for 2022, which surveyed over 30,000 people in 30 countries noted: “We’re not the same people that went home to work early in 2020.” The traumatic and unifying impact of Covid-19 itself made reassessing priorities mainstream and gave a new lease of life to the phrase carpe diem. People have indeed begun to “seize the day.” A 2022 Gallup survey puts well-being and work-life balance almost neck-and-neck with pay as a priority.

The pandemic tipped a low rumbling about flexible working and work-life balance into a roar.

Clearly without the stop-start nature of lockdowns  — still ongoing in China  — the shift to WFH and the surprise findings of productivity gains would not have happened. To just “go back,” which was the working assumption of most governments and business leaders, turned out to wrong.

Today we are at the beginning of a new era I call The Nowhere Office, in which many of the old assumptions about where, when and how people work will continue to be shifted by new realities that dominate the people who seek knowledge work and those who manage and lead them.

The Rising Demand for Flexible Working

The first is flexibility. The flexible workplace will win over the inflexible one and the world has a new kind of worker: The Flexetariat. Today the unquestioning drudge, hemmed in by the commute, has been replaced by a highly assertive worker who puts freedom and flexibility at the center of their working identity.

McKinsey & Co.’s latest American Opportunity Survey shows that 87% of workers say that if offered flexibility they would take it.  Some 58% of workers across both blue and white collar occupations already do — able to work from home at least one day a week. Data from recruitment firm Upwork Inc. shows that 78% of freelancers cite the ability to schedule flexibility as a key concern. The global freelance market is set to grow  at a compound annual rate of 15% from 2021 to 2026.

The Flexetariat values their time as much as their freedom. Apple Inc. and Alphabet Inc. are among the companies that have all faced employee backlash against their presenteeism efforts, with Stanford University professor Nicholas Bloom, a key researcher on remote work trends, noting that noncompliance is as high as 40% in some companies trying to force return to office on staff.

Many leaders were — and some remain — skeptical of hybrid working (the post-pandemic way to describe flexible working) because it’s hugely disruptive to implement and still very much a work in progress. These leaders continue to find it frustrating and disappointing that they can’t either compel or cajole their office workers back. One of the most vocal has been Tesla Inc. Chief Executive Officer Elon Musk, who has adopted a novel motivational leadership style by publicly berating workers who aren’t in the office physically and suggesting “they should pretend to work somewhere else.”

And yet smart leaders are beginning to loosen their presentation bias: A June-July survey from Morning Consult, commissioned by Zoom, showed that 90% of senior leaders preferred a hybrid or remote working environment to full-time presenteeism. They understand that culture and cohesion can be built in new ways on new schedules.

Companies like Harman International Industries Inc., a Samsung Electronics Co.-owned audio technology producer of headphones and luxury in-car systems with about 30,000 employees around the world, has introduced Harman Flex and recently convened its senior global leaders in Miami to mandate them. It’s expected to affect 40% of the company.

Four-day week trials have happened and are underway throughout the world. Fujitsu Ltd. has embraced a flexible work policy dubbed #workyourway, making flexible working the norm, and some European banks now say flexibility is a competitive advantage. For better or worse, having a flexible working policy is going to become de rigueur.

Yet flexibility has its drawbacks. No one size fits all, which makes it very messy to manage. Plus, those who can work from home experience downsides ranging from unwanted surveillance to longer hours and and always-on culture. Also, those who can’t work flexibly still outnumber those who can — and often tensions rise when they do so in the same workplace. In the future, the broker of many of these tensions will be trade unions, who are the focus of the second shift to watch: power.

Flexible working policies now feature in a raft of new legislation across the world.  Ireland declared remote work a national strategy. Recent reform of EU employment law will affect 180 million workers and is designed to regularize an increasingly unpredictable labor market. The UK’s “right to request” flexible working law is expected to be updated for the first time since 2014. A recent parliamentary recommendation stated the need to “continue to consider the rights of those who wish to work flexibly and develop a better understanding of what ‘flexibility’ means for the various groups that make up the workforce.”

The admission that lawmakers must better understand their workers somewhat understates the power shift.   The consulting firm PricewaterhouseCoopers LLP notes that ”there is an opportunity for unions who wish to build a more prominent role to do so and to reassert their relevance in the modern workplace.” While trade union membership continues to decline overall, 80% of countries were involved in union-led discussion during the pandemic, according to the International Labour Organization. Hitherto union-immune organizations — from Amazon.com Inc. to Starbucks Corp. — have faced unprecedented activism and unwanted media attention.

White collar demands are becoming a contagion that may indirectly increase the power of frontline workers, too.

Part of the rebalancing of power is clearly connected to the historically tight labor market —  making recruitment and retention regarded in some industries as a headwind every bit as significant as geopolitical instability or the energy crisis. But part of it is a failure of leaders to update their working assumptions.

The Australian psychologist and philosopher Elton Mayo, whose research in the 1920s and 1930s challenged assumptions about workers as mechanistic humans whose productivity could be improved only by extrinsic rewards like pay and who ushered in the human relations school of management, noted in  The Social Problems of an Industrial Civilization that “it is no longer possible for an industrial society to assume that the technical processes of manufacture will exist unchanged for long in any type of work.”

The Daily Commute Is Dead

Clearly, Mayo’s “technical processes of manufacture” as it applies to modern knowledge workers is changing through technology, but so is the location of that process. On to the third shift: place.

The commute is now seen as a passion killer for workers. In the UK, towns like Watford, which is situated within an area known as  “the golden triangle” between the universities in London, Cambridge and Oxford,  are rising in fortune, while the recent billion-dollar deal by real estate agents Workspace Group Plc across fifty suburban offices in the US shows a bet that the migration of offices to be near to where people live will continue.

Office life was changing at least a decade before the pandemic’s tipping point. The internet, smartphone and teleconferencing ushered much of work into a new venue: cyberspace. WeWork Inc., the breakthrough pioneer of coworking spaces, was founded in 2010. Interestingly, property giant Cushman & Wakefield Plc invested $150 million in a strategic partnership with WeWork in 2021.

Back to Magritte’s surreal masterpiece “Golconda,” depicting those samey humans in humdrum lockstep. It hangs in Houston, Texas, the state where the iconic I.M. Pei-designed Energy Plaza is being transformed into mixed-use workspace with apartments. Real estate analysis and investment firm CBRE notes that over half of companies want to reduce their office space  “mostly to eliminate excess space they anticipate will be freed up by remote work and more efficient use.”

Carpe diem plays its part in this shift. People don’t want to waste time on travel that doesn’t matter, or on being unproductive:  Research by office outfitter Steelcase Inc. noted that in full occupancy times 87% of workers spent two to four hours away from their desk.  (Not that the Flexetariat is without its contradictions: Research by David Courpasson, a professor at France’s Emlyon Business School and colleagues at the Louvain School of Management in Belgium also shows considerable resistance to hot desks because people want a fixed personal space, even if they don’t want to have to use it every day.)

The office, historically, has both been a place to get the admin done, but also to bond and build culture. Spare a thought for the well-intentioned CEO who wants growth to come the old-fashioned way: via the teamwork that comes from being face to face.

The biggest shift can be seen in the move from a property-based approach to a philosophical one. What will matter going forward isn’t jettisoning the old assumptions of a large office space to house ranks of worker cubicles, but something else entirely: a place to give people meaning and the new assumption that this isn’t all day every day in one place.

Sandy Pentland at MIT and colleagues in the human gymnastics lab interpret the “social physics”  philosophy of the 19th century into real-world innovation in how people move around space to work their best. To gossip and huddle and innovate before springing apart again to their lives.

The leader who wishes to get colleagues back to the office more will have to invest in a socially scientific understanding of dynamics around networks, collaboration and innovation. Simply plumping up the cushions and installing better showers and coffee isn’t going to move the needle.

But it’s the beginning of a new time in which place, identity, culture, purpose, well-being and productivity occur against a new set of working conditions.

It’s the beginning of a new time when the worker being is understood to be the human being, shorn of their job title or uniform (or bowler hat) and replaced instead by a group of individuals who still need to work — but differently from before.