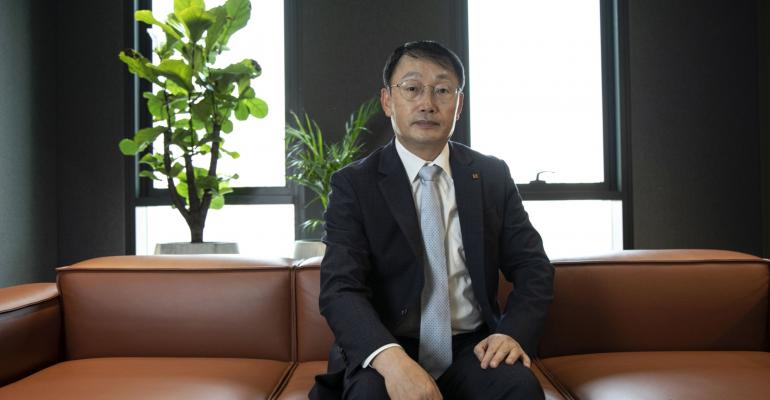 “Global telecom companies are struggling to change, and that’s why their shares are discounted,” says CEO Ku Hyeon-mo.

(Bloomberg) -- South Korea’s telecom giant KT Corp. aims to double its sales from digital-related services to $10 billion by 2025, betting that artificial intelligence and cloud operations can offset the regulatory and market headwinds facing its traditional business.

The telecom service provider is also considering listing its cloud centers unit separately as part of the plan to transform into a digital platform company, chief executive officer Ku Hyeon-mo said in an interview Thursday. Sales from digital services was about $5 billion last year.

“Global telecom companies are struggling to change, and that’s why their shares are discounted,” Ku, 58, said in Seoul. KT is one of the few “telecom companies in the world that are well-adapted to new digital industry.”

KT’s push for new businesses comes as the nation’s telecom companies face tepid growth in new users for Internet services since 2017 amid saturation. Tight regulation holding down wireless fees has also weighed on companies, as South Korean presidents have pledged to lower mobile phone bills when they took office.

“KT has the highest dividend yields among Korea’s three telecom companies,” said Choi Nam-Kon, an analyst at Yuanta Securities Korea. “It has the largest size of non-telecom businesses among the three companies, which means it will be least affected by regulation on mobile phone bills.”

Shares of KT have risen 19% year-to-date, outperforming rivals SK Telecom Co. and LG Uplus Corp. and tracking better than the 13% loss by the benchmark Kospi index.

The company is looking to almost triple its annual revenue from AI-driven software for call centers in three years, as well as target more sales from AI-led logistics services for shipping companies, Ku said.

KT will be able to list shares of its unit KT Cloud, which operates six cloud centers, once regulatory changes are made to allow such offerings by protecting the interests of shareholders of the parent company, Ku said, without providing any timing or expected size. KT is considering a sale of a minority stake in KT Cloud, people familiar with the matter said in April. A sale of about 20% of its holding to a strategic partner could raise around $400 million, the people have said. KT doesn’t have a plan to sell existing shares in the unit, the company said in April.

“We should not damage the interests of the existing shareholders” of KT Corp., Ku said.

KT, which used to be a government-controlled firm before 2002, will seek to win orders from the Korean government for cloud services based on its experiences with state-run projects, he said. The government tends to prefer local providers due to security concerns, he said, and that the market is expected to grow to 800 billion won ($626 million) by 2025.

It remains to be seen if KT can dominate in what’s a highly competitive space that’s already attracted regulatory scrutiny. Korea’s Fair Trade Commission started in February an investigation into 32 companies running cloud services, citing oligopoly concerns. The regulatory body said it will focus its first probe on unfair business practices in areas including order bidding and customer relationships.

The company is also seeking listing of additional units this year: Kbank, an online banking operator, and Bookclub Millie, an e-book company. It’s also planning sometime in the future to list KT Studio Genie, a film and TV studio seeking partnerships with global players like Paramount and Canal+. Ku declined to comment on their valuation, citing rising uncertainty in global markets.

To Ku, opportunities for diversification continue to grow.

“When I talk about making profits from selling AI, people are surprised,” Ku said. “We are also planning to sell robots in near future --- I’m sure we will be good at it, because we have experiences in sales of mobile phones and its maintenance.”