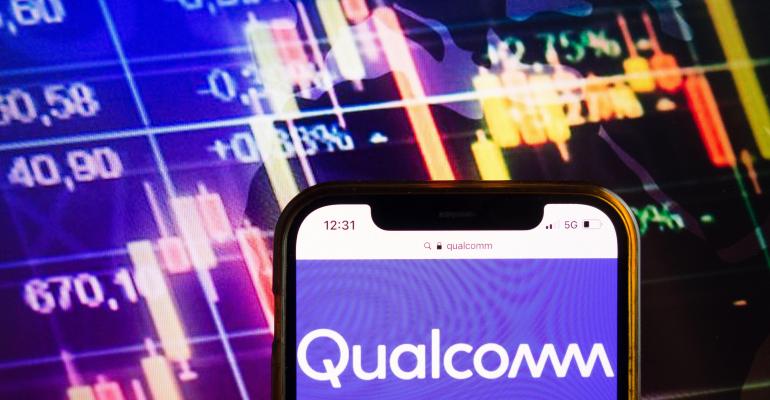 Qualcomm Is Plotting a Return to Server Market With New Chip

(Bloomberg) -- Qualcomm Inc. is taking another run at the market for server processors, according to people familiar with its plans, betting it can tap a $28 billion industry and decrease its reliance on smartphones.

The company is seeking customers for a product stemming from last year’s purchase of chip startup Nuvia, according to the people, who asked not to be identified because the discussions are private. Amazon.com Inc.’s AWS business, one of the biggest server chip buyers, has agreed to take a look at Qualcomm’s offerings, they said.

Qualcomm gained as much as 2.9% to $152.91 in New York trading after Bloomberg reported the news. The shares had been down 19% this year through Wednesday, part of a broader slide for chip stocks.

Chief Executive Officer Cristiano Amon is trying to turn Qualcomm into a broader provider of semiconductors, rather than just the top maker of smartphone chips. But an earlier push into the server market was abandoned four years ago under his predecessor. At the time, the company was trying to cut costs and placate investors after fending off a hostile takeover by Broadcom Inc.

This time around, Qualcomm has Nuvia, staffed with chip designers from companies such as Apple Inc. Amon, who acquired the business for about $1.4 billion in 2021, has said that its work will help revitalize Qualcomm’s high-end offerings for smartphones and personal computers. But Nuvia was founded as a provider of technology for the server industry.

Qualcomm’s return to the server business will require a rebuilding of trust among the prospective customers it courted the last time. The industry also has changed dramatically in the past few years. Amazon has developed homegrown processors for servers, though it also buys chips from other vendors. And startups such as Ampere Computing LLC have made inroads, winning contracts with customers such as Microsoft Corp.

Still, the potential rewards could be big. A successful push into server chips would mean Qualcomm has a much bigger-ticket item to sell. The company’s phone offerings are typically priced in the tens of dollars. The highest-end server processors carry prices of more than $10,000 per chip.

Spending on cloud computing infrastructure -- the kind of equipment that Amazon, Google and Microsoft use to whisk data around the world -- totaled $73.9 billion last year, according to research firm IDC. That was up 8.8% from 2020.

Data-center processors alone generate $28 billion a year, according to Bloomberg Intelligence analyst Mandeep Singh. “Qualcomm’s re-entry to the Arm server market broadens its reach into one of the bright spots in semiconductors,” he said in a note Thursday.

The owners of giant cloud data centers have long relied on Intel Corp.’s chip technology for their servers. But they’re increasingly embracing processors that use designs from Arm Ltd., a key partner in phone chips for San Diego-based Qualcomm.

Amazon has addressed this need by building its own chips based on Arm designs. The e-commerce giant has created multiple generations of its Graviton processor line and touts its performance to customers.

But Amazon also still uses chips from Intel, Advanced Micro Devices Inc. and Nvidia Corp. -- and Qualcomm sees an opportunity to carve out a niche among those suppliers.

The last time it made such an attempt was 2017, when Qualcomm began selling an Arm-based server chip called the Centriq 2400. It relied on Samsung Electronics Co. to manufacture the products and said they outperformed Intel’s Xeon processors in energy efficiency and cost. At the public introduction of the server chip line in November of that year, potential customers such as Microsoft took to the stage to voice their interest in the offering.

But less than a year later, the company’s leadership began shuttering the project. Former Intel executive Anand Chandrasekher, who had led the effort, left Qualcomm.

For Intel, Qualcomm’s latest move would bring yet more competition to an industry it once dominated. The company has been racing to bolster its technology and manufacturing after losing market share to AMD and homegrown chips like Amazon’s.