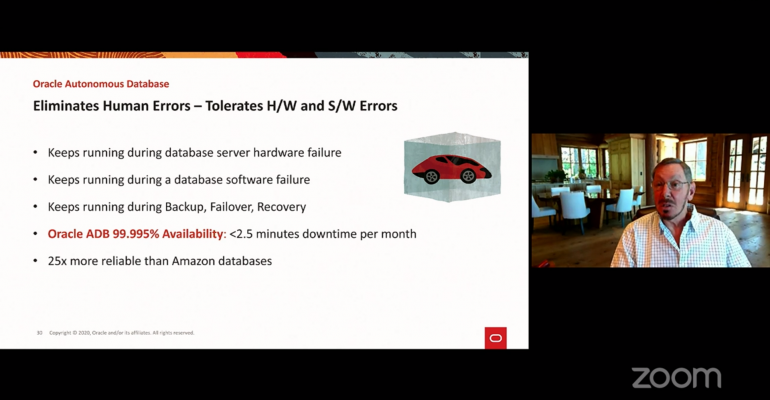 Larry Ellison says you can have your own, full-fledged Oracle cloud region, behind your own firewall.

Why opt for AWS Outposts, which only extends some Amazon Web Services capabilities to your own data center, when you can have all public cloud services Oracle has to offer on premises, behind your firewall?

That, in essence, was Larry Ellison’s pitch during Oracle’s virtual event Wednesday, when he announced a lineup of new services, the biggest of them being the company’s offer to sell what amounts to your own private region of its Gen2 cloud.

“Nobody gives you a complete public cloud behind your firewall, dedicated to you,” Oracle’s founder, chairman, and CTO said. “This is a first in the cloud industry.”

Getting as close as possible to giving clients the equivalent of public cloud in their own data centers is one of the big hot things in enterprise IT at the moment. It’s hot for a variety of reasons, the ones cited most often being data sovereignty requirements (government mandates to store data within a nation’s borders), security requirements (not all organizations trust public cloud providers with their most sensitive data), and performance (heavy analytics or machine learning applications run faster when the computing horsepower sits right next to the systems storing the data being crunched.)

Not only have all the major cloud providers rolled out their versions of this, so have the big hardware vendors, the likes of Hewlett Packard Enterprise and Dell Technologies, offering to deliver, set up, and manage their hardware on your data center floor and let you pay only for the capacity and length of time you use it.

Oracle has had its own version as well. Called Oracle Cloud@Customer, the offering started with just compute and storage infrastructure and some Platform-as-a-Service features, later adding Oracle ERP and CRM SaaS products and more PaaS features. Now, according to Ellison, you can get everything you get when using Oracle’s public cloud but on premises, fully managed by Oracle staff.

The features, besides raw compute, include Oracle’s Autonomous Database, running on its Exadata hardware, all its Fusion SaaS applications, analytics, storage, management and governance, security, compliance, and app development services.

Oracle announced two early customers of the new offering: the Japanese consulting and IT solutions giant NRI, the State of Oman’s IT operations group.

Ellison also announced expanded capabilities to the previously existing Exadata Cloud@Customer offering, which now also features Autonomous Database. The product, a database which according to Oracle manages itself 100 percent automatically, was previously only available as a public cloud service.

The addition of Autonomous Database to the on-prem offering “unlocks a huge new market for us that these customers, especially some of the largest customers – big banks, government agencies – suddenly can get access to the autonomous database in their data center, behind their firewall,” he said.