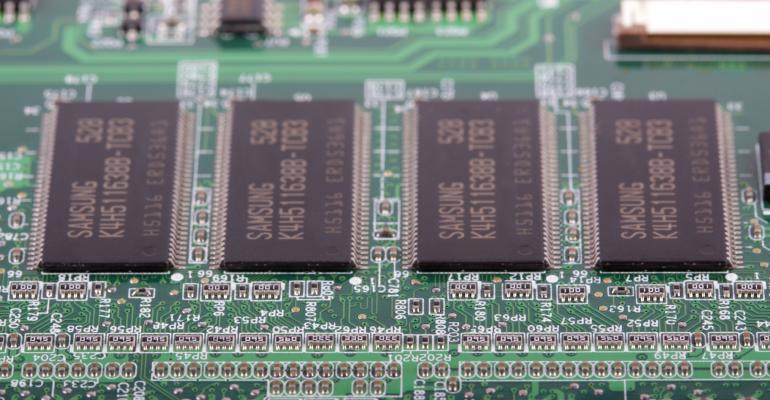 Samsung to Spend $360 Billion on Chips, Biotech Over 5 Years

The company's semiconductor division is expanding rapidly in an effort to compete with the likes of Intel and TSMC.

(Bloomberg) -- The Samsung group plans to raise spending by more than 30% to 450 trillion won (about $360 billion) over the half-decade to 2026 to shore up businesses from chips to drugs, as South Korea’s conglomerates grapple with growing economic and supply shocks.

The corporate giant -- whose units from Samsung Electronics Co. to Samsung Biologics Co. dominate Korea’s economy -- promised in a statement to create 80,000 jobs through 2026, mostly in semiconductors and biopharmaceuticals.

Samsung, run by the scion of one of Korea’s oldest and wealthiest families, is one of a handful of so-called chaebol that are outlining investment plans as the country’s new president takes office. President Yoon Suk Yeol, who began his five-year term May 10, has been a vocal supporter of the conglomerates and made them a key pillar in his economic growth plans.

“It’s a classic way of Korean companies to appeal to a new president,” said Park Ju-gun, head of Leaders Index, a Seoul-based research institute. “Investors need to check whether the promised amount of investments are actually executed or not.”

Along with the heads of other prominent chaebol, Samsung is expected to shoulder part of the responsibility for driving growth in a country dealing with rising inflation and supply chain disruptions due to the pandemic and war in Ukraine.

Samsung Group’s latest investment blueprint, which overlaps with public pledges made in 2021, comes about a year after family scion Jay Y. Lee walked out of jail. The conglomerate’s leader, who was serving a sentence on graft charges, was paroled just months ahead of presidential election earlier this year.

The conglomerate is focusing particular attention on its technology flagship, the crown jewel of a sprawling empire that spans shipbuilding, technology, health care and finance. Samsung Electronics, the world’s largest maker of smartphones, displays, memory chips and consumer appliances, unveiled plans last year to invest $151 billion through 2030 to delve deeper into advanced chipmaking.

Much of that will go toward its semiconductor division, which is expanding rapidly in an effort to compete with Intel Corp. and Taiwan Semiconductor Manufacturing Co. in making chips for global names such as Nvidia Corp. and Qualcomm Inc.

Samsung Electronics and SK Hynix Inc. had previously pledged more than 510 trillion won of investment in semiconductor research and production in the years to 2030 under a national blueprint devised by the previous president’s administration.

In a statement, the group said about 360 trillion won will be spent domestically while the rest will be invested overseas. Samsung Electronics is building an advanced $17 billion US chip plant in Texas, a win for the Biden administration as it prioritizes supply chain security and greater semiconductor capacity on American soil.