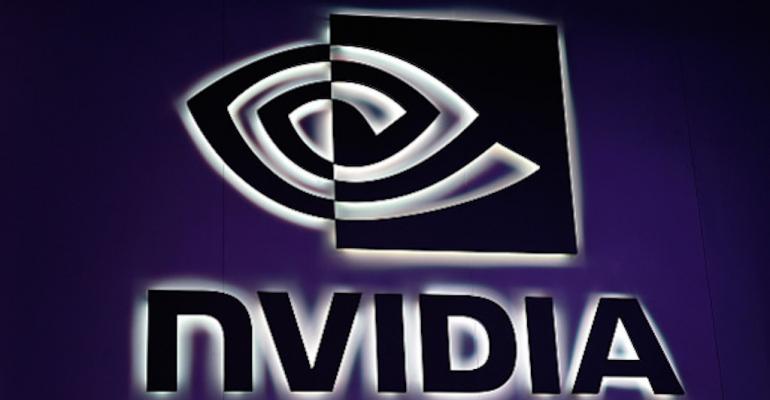 Nvidia Corp., the world’s largest chipmaker by market value, jumped as much as 11% on Thursday morning after reporting a strong third quarter and boosting it’s sales outlook for the rest of the year.

(Bloomberg) -- Nvidia Corp., the world’s largest chipmaker by market value, jumped as much as 11% on Thursday morning after reporting a strong third quarter and boosting it’s sales outlook for the rest of the year.

Revenue in the fiscal fourth quarter will be about $7.4 billion, the company said Wednesday. That compares with a $6.86 billion average analyst estimate, according to data compiled by Bloomberg. The shares hit a record intraday high of $326.07 in New York.

Nvidia, whose roots are in graphics chips for gaming systems, has pushed into processors that run servers -- the powerful machines used in cloud computing and corporate networks. Revenue from that segment jumped 55% in the third quarter to $2.94 billion, well ahead of the $2.69 billion estimated by analysts. Sales to the auto industry, though, were disappointing -- hurt by supply constraints.

Analysts were broadly positive on the results, and several firms increased their price target on the stock, citing growth in Nvidia’s data-center and gaming businesses as particular bright spots.

“It’s hard to imagine things going smoother for NVDA at the moment,” analysts at Bernstein wrote in a note to investors.

Nvidia has averaged about 57% revenue growth over the last eight quarters. That performance has helped push its market capitalization above $730 billion, making it more than three times the size of Intel Corp., a company that has triple Nvidia’s annual revenue. Nvidia is now one of the top 10 companies by market value in the S&P 500 Index, putting it just ahead of Berkshire Hathaway Inc., JPMorgan Chase & Co. and Visa Inc.

Even before the post-earnings rally, Nvidia’s shares had more than doubled this year.

Nvidia posted record sales of $7.1 billion in the third fiscal quarter, topping the $6.81 billion average prediction from analysts. Earnings came in at $1.17 a share, excluding some items, compared with an estimate of $1.11.

Nvidia also sells processors that handle cryptocurrency mining, but that market has been volatile. The division that includes that business saw its revenue climb 21% from a year earlier, with $105 million in revenue coming from the mining chips.

The company sees another big opportunity helping power the so-called metaverse -- a term for interconnected virtual worlds. The company has a software platform, Omniverse, for creating 3D online spaces.

Meanwhile, Nvidia is more than a year into the process of trying to acquire Arm Ltd., a designer of chips used in smartphones and myriad other technologies. It’s still trying to obtain regulatory clearance for the deal in multiple jurisdictions around the world.

The U.S. Federal Trade Commission has expressed concerns about the purchase, Nvidia said Wednesday. Bloomberg reported on the agency’s probe earlier this year.

The transaction would give Nvidia Chief Executive Officer Jensen Huang the most widely used underlying technology in the chip industry and spread the company’s reach into many devices, including smartphones. But several of Arm’s major customers, and Nvidia’s competitors, have voiced their opposition to the purchase because of potential conflicts it might create. SoftBank Group Corp. currently owns Arm.

Nvidia said on its earnings call that the merger would enhance competition and described the deal as a great opportunity for the industry.