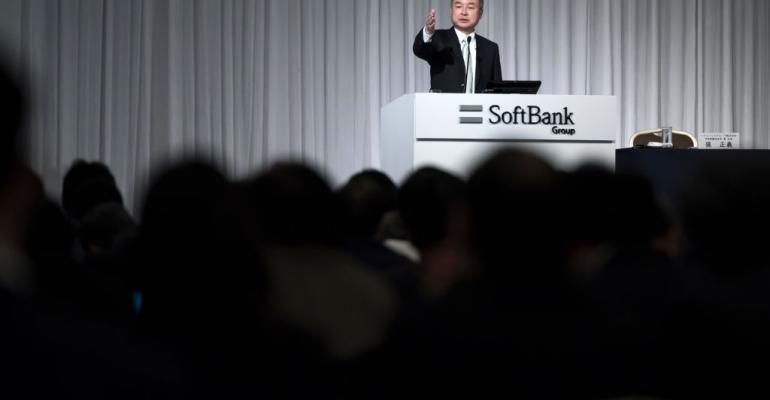 SoftBank Explores a Sale or IPO of Chip Company Arm

Arm, which lost $400 million in the most recent fiscal year, is looking to cut costs and improve earnings.

Giles Turner and Sarah McBride (Bloomberg) -- SoftBank is exploring options for selling part or all of its stake in Arm Holdings Inc., either through a private deal or a public stock listing, according to people with knowledge of the matter.

If it pursues a listing, the chip-design company could go public as soon as next year, said the people, who asked not to be identified because the deliberations are private. That would accelerate a timeline SoftBank Group Corp. founder Masayoshi Son laid out in 2018, estimating an initial share sale for Arm some time around 2023, a goal repeated in October by Arm Chief Executive Officer Simon Segars.

No decision has been made, and SoftBank could ultimately choose to hang onto the company, which is wholly owned by SoftBank Group and its Vision Fund. Son and his deputies began considering options in part because of the improving market for semiconductor companies, said two of the people. A deal would also fit into SoftBank’s current strategy to unload many of its holdings and boost the stock price through buybacks.

Goldman Sachs Group Inc. is advising on a potential deal, according to the Wall Street Journal, which reported the news Monday. Representatives for Arm, Goldman Sachs and SoftBank declined to comment.

Related: A Huge Week for Arm – in the Data Center Too

Arm was the U.K.’s largest listed technology company, receiving royalties from companies such as Apple Inc. and Samsung Electronics Co. for chip designs used in the world’s most popular mobile phones and tablets. When Son bought it for $32 billion in 2016, change came fast. The company added about 2,000 employees and made plans for a new 48 million pound ($60 million) U.K. office building.

The chip designer is still currently valued by SoftBank at its acquisition price, according to the Japanese company’s latest quarterly filings. But semiconductor stocks have been on a tear. Nvidia Corp.’s market value topped Intel Corp.’s last week for the first time, powered by soaring demand for graphics chips in data centers and other fast-growing technology fields.

Arm would need ample time to make preparations for a listing if it goes that route. Marcelo Claure, the chief operating officer at SoftBank, said in an interview with the Financial Times published Monday that he doesn’t expect Arm to be public in the next 12 months.

If it pursues a listing, it’s unclear whether Arm would go public in the U.K. or the U.S., where it has been slowly shifting many of its key executives in recent years. If it does so in the U.K., the 25% free-float needed would make it one of the biggest tech IPOs in years.

SoftBank’s shares have more than doubled from a low in March, taking the Tokyo-based company’s market value to $127 billion, with record equity buybacks and a series of wins helping the stock recover from setbacks in 2019 led by its investment in WeWork. SoftBank sold part of its stake in T-Mobile US Inc. last month, part of a broader $42 billion push to unload assets to finance stock buybacks and pay down debt.

Arm, which is owned by SoftBank and its $100 billion Vision Fund, is looking to cut costs and improve earnings, said one of the people familiar with the matter. The company lost 42.8 billion yen ($400 million) in the fiscal year that ended in March. It’s also planning to transfer its data and device-management business to parent SoftBank to focus on its main semiconductor operations. The Internet of Things Services Group was billed by Arm as a key initiative to expand into managing information from millions of new devices being connected to the internet.