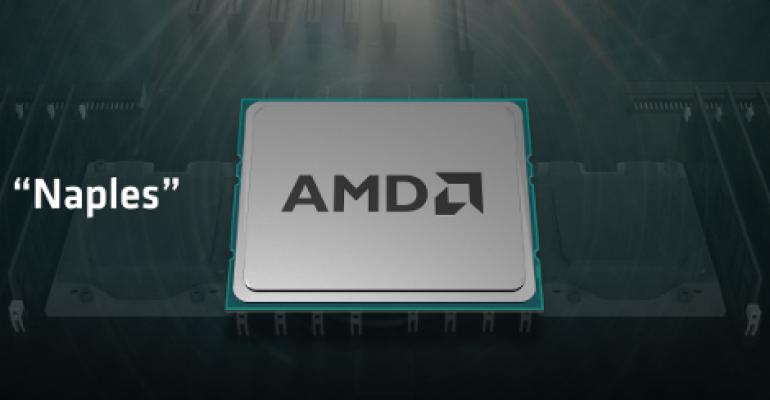 Epyc, which goes on sale Tuesday, is AMD’s attempt to turn around a market share that’s shrunk to less than 1 percent, ceding the entire market to Intel Corp.

(Bloomberg) -- Advanced Micro Devices Inc., trying to re-enter the lucrative server chip market, will get the help of Microsoft Corp. and Baidu Inc. who have committed to using its new Epyc product in their data centers.

“This is just the beginning of the engagement. You’ll see much more from us,” said Chief Executive Officer Lisa Su. “AMD at its best was a very strong player in the data center.”

Epyc, which goes on sale Tuesday, is AMD’s attempt to turn around a market share that’s shrunk to less than 1 percent, ceding the entire market to Intel Corp. Signing up data center operators such as Baidu, China’s largest search engine, as customers has become more important in the decade since AMD was a serious competitor to Intel. That’s because those customers are growing at a much faster rate than the overall industry and buy directly to build their own computers.

AMD announced versions of Epyc ranging from about $4,000 to $400 per chip in price. The server chips will be cheaper than their direct Intel equivalents and offer more performance, according to Forrest Norrod, a company vice president. The company made comparisons with Intel chips currently on sale and said it believes it will keep its leadership in some benchmarks even when the world’s largest chipmaker updates its product range.

Hewlett Packard Enterprise Co., Dell Technologies Inc., Lenovo Group Ltd. and other companies will offer servers based on Epyc and Microsoft, Red Hat Inc, and VMware Inc. will make sure their software works on the new chips.

Microsoft, for its Azure services, intends “to be the first global cloud provider to deliver AMD Epyc, and its combination of high performance and value, to customers by the end of the year,” said Girish Bablani, Microsoft corporate vice president, Azure Compute.

Baidu said it plans to use the AMD server chips for search, artificial intelligence applications and the cloud.

“Choice is only important if we are able to get the performance we need for our workloads,” Liu Chao, senior director of the company’s system technologies department, said in a statement. “With AMD and their new Epyc processor, we are confident that innovation in the server market will accelerate.”

Since taking over AMD in 2014, Su has been working to turn around the chipmaker, which has struggled to compete with Intel through long periods of its 48-year existence. Last year Intel turned $17 billion of sales from its data center unit into $7.5 billion of operating profit.

“We take all competitors seriously, and while AMD is trying to re-enter the server market segment, Intel continues to deliver 20-plus years of uninterrupted data center innovations while maintaining broad ecosystem investments,” Intel said in a statement supplied ahead of AMD’s event to introduce the chip Tuesday in Austin, Texas. “With our next-generation Xeon Scalable processors, we expect to continue offering the highest core and system performance versus AMD.”

AMD’s last big surge in profits and revenue was more than a decade ago when its Opteron server part allowed it to grab more than 20 percent of the market. Follow-up models failed to arrive on time or fell short on performance promises and Intel improved its products -- eventually all but throwing AMD out of the most lucrative area of the processor market.

AMD is aiming to get back to the level reached by Opteron’s initial success, but cautions it will take time.

“Today we’re at less than 1 percent. At our peak we were above 25 percent,” Su said, adding the company’s interim target is a double-digit-percent market share. “We’re realistic in that will take some time -- across the next couple of years.”