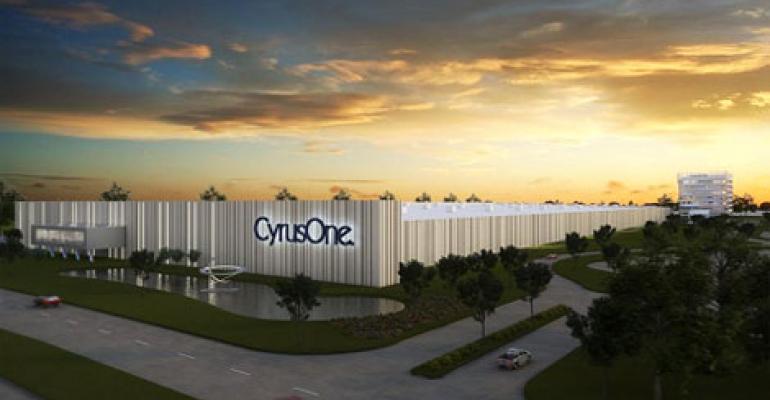 DCK Investor Edge: CyrusOne -- Catch Me If You Can

CyrusOne has developed a low-cost data center design which also appears to give them a speed-to-market edge when negotiating and landing hyperscale cloud deployments.

The inability for hyperscale cloud providers to forecast their own customer growth is at odds with their need to seamlessly provide them with unlimited servers "on-demand." This has created a new playing field for resourceful landlords: The opportunity to co-create wholesale data center solutions to meet increasingly tight schedules that can deliver on contractual service level agreements, or SLAs.

Increasingly, the construction of enormous data center shells is being accelerated to meet existing customer expansions and perceived hyperscale demand across several markets. This requires advanced land purchases and the fast-tracking of entitlement, design, and pre-development tasks.

These changes are most notable in Tier 1 data center markets with available land, such as Dallas-Fort Worth and Northern Virginia's "Data Center Alley," where the landscape is now dotted with massive building sites. The phrase "must be present to win," comes to mind.

CyrusOne was one of the last REITs to report results and Q1'17 was another exceptional leasing quarter for the company. This was in large part due to its "Massively Modular" design/build approach, which continues to shave off time and squeeze money out of each successive project. 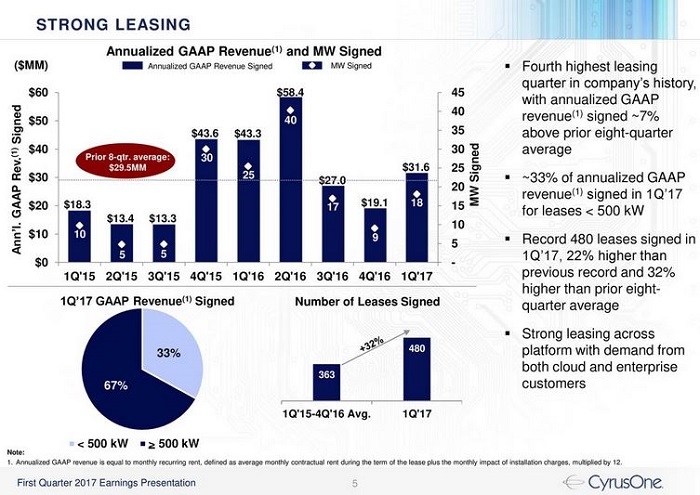 During the past six quarters, CyrusOne has leased an average of 37.2 MW per quarter. In addition to having 30 large wholesale customers with at least 9MW each, the landlord also leases retail colo space to thousands of enterprise customers. Notably, during Q1'17, a record 480 leases were signed, one-third of them under 500kW each.

On the earnings call, CyrusOne management guided analysts to model $20 million of GAAP revenue per quarter going forward. However, this guidance could be considered the "low bar." CyrusOne will shortly be able to triple the size of its existing 2.5 million-square foot portfolio due to the rapid pace of powered-shell development underway in major markets, including Chicago, Northern Virginia, Phoenix, Dallas, and San Antonio.

During the past two years, CyrusOne has leapfrogged larger peers when it comes to wholesale leasing in part because of its short delivery times and low cost.

Back in March, the company hosted an event where management and the design-build team explained to Wall Street analysts how they can build so much faster and cheaper than industry peers. There were prepared remarks, panel discussions, and a lengthy Q&A with the audience.

The slide below was used by CFO Diane Morefield to illustrate how CyrusOne could deliver a 22.5 MW build-to-suit facility in 180 days for $6.4 million per MW. The example was CyrusOne's "standard 2N data center product," recently delivered in Northern Virginia. This data center design has been engineered to five 9s reliability and uses less equipment than competitors, according to the company -- a big ingredient in the secret sauce. 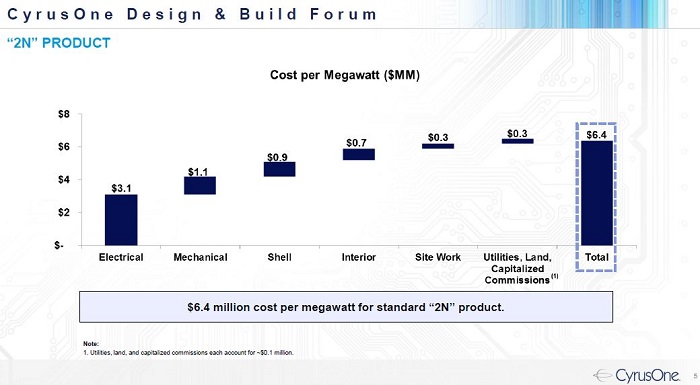 However, gross power capacity of this Sterling, Virginia, data center is 30 MW. This means if the customer only required an "N" solution, the reduction in mechanical and electrical equipment would result in an eye-popping low-cost build at $4.83 million per MW.

Utilizing the same team members and supply chain from project to project has sped up the design phase. The self-described "maniacal" approach to driving costs and time out of the schedule includes running the electrical conduits on top of the slab, (rather than being trenched into the ground in a typical design). This cuts a huge amount of time out of the schedule, especially in cold climate zones, where frozen ground can be an issue.

Meanwhile, the value-engineering of electrical conduit fittings saved $75,000 on a 9MW project. Last year CyrusOne delivered about 100 MW, so this design change alone could save over $750,000 across the portfolio. There is no detail too small when it comes to driving costs down.

CyrusOne isn't attempting to deliver the same product being built by DuPont Fabros Technology or Digital Realty Trust. In fact, the company's team suggested that there could be as much as 50 percent fewer components in the CyrusOne mechanical and electrical design. Meanwhile, recent leasing success suggests that engineers who operate some of the largest cloud data centers on the planet are satisfied with reliability of its design.

Catch Me if You Can

The CyrusOne secret sauce is now out of the bottle and hidden in plain view for anyone willing to devote a few hours to watching the webcast like I did. However, like most things in the real world -- especially mission critical environments -- innovation is easier said than done. It can be an enormous cultural challenge for most organizations to change from tried and true engineering principles and try a novel approach. The innovations and processes at CyrusOne have evolved over several years.

CyrusOne believes the standard 2N product can be built for $5.1 million per MW in the Pacific Northwest if there is a hyperscale customer willing to commit to a 45 MW super-scale data center. However, CEO Gary Wojtaszek is still not satisfied. He believes $100,000 of additional savings could be achieved to deliver on his stated goal of $5 million per MW. One area which remains untapped would be for CyrusOne to negotiate long-term contracts with key members of the supply chain.

The leasing success of CyrusOne during the past two years has often been described by Wojtaszek as "punching above our weight class." Less than three years ago, CyrusOne had zero top public cloud customers. During the last six quarters, the data center REIT has been able to blow past its historical leasing averages in large part by signing nine of the ten largest cloud providers.

The slide below was intended to address concerns voiced by some analysts that CyrusOne was "buying the business" at lower returns than competitors were willing to accept. The comparison points out that a lower cost structure more than balances out the ramp-up period for customer rents. 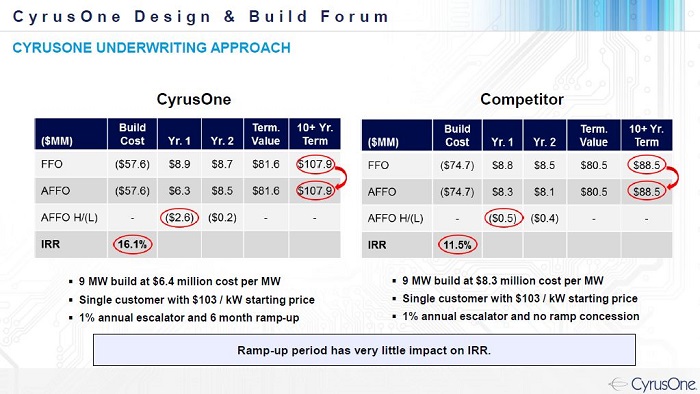 There certainly will be an ongoing debate regarding cost per megawatt and apples-to-apples data center comparisons. However, it has become crystal clear that the ability to deliver large data halls within months of inking a contract has become an edge for CyrusOne in landing hyperscale cloud deals.

Check back next week for another installment of DCK Investor Edge, our weekly column about investing in data centers.

In addition to covering investing and business news for Data Center Knowledge, Bill Stoller is an Expert Contributor for REITs on Seeking Alpha. The information contained in this article is not investment advice.