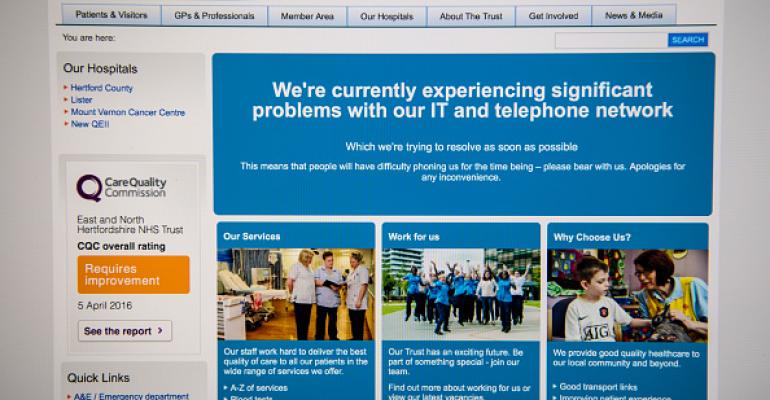 A message informing visitors of a cyber attack is displayed on the NHS website on May 12, 2017 in London, England. NHS hospitals across England have been hit by a large-scale cyber-attack with many hospitals having to divert emergency patients and doctors reporting messages demanding money. (Photo by Carl Court/Getty Images)
Business

A wave of threats demanding a ransom of $300 to unlock the computer or risk losing data hit more than 200,000 computers in at least 150 countries from the U.S. to Europe to Asia. The malware used a technique purportedly stolen from the U.S. National Security Agency. The victims were given 72 hours to pay the ransom in bitcoin.

FireEye, which provides software security services, rose as much as 8.8 percent in New York. Analysts at Oppenheimer Securities said the Milpitas, California-based company could be the biggest beneficiary of higher cybersecurity spending, due to its exposure in Europe, where the most high-profile of the attacks occurred.

At the height of the crisis Friday and early Saturday, 48 organizations in Britain’s National Health Service were affected, and hospitals in London and elsewhere urged people with non-emergency conditions to stay away as technicians tried to stop the spread of the malicious software.

The so-called WannaCry attacks "could serve as a wake-up call for many organizations and countries delaying a review of their cybersecurity hygiene," said Shaul Eyal, an analyst at Oppenheimer & Co., in a note to clients.

A new version of the ransomware may have also been spreading over the weekend.

Companies including Palo Alto Networks Inc., Symantec, Check Point Software Technologies Ltd.,  Cisco Systems Inc. and Oracle Corp. are others that are likely to benefit, according to Pierre Ferragu, an analyst at Sanford C. Bernstein. The $967 million PureFunds ISE Cyber Security ETF, or HACK, jumped the most in six months.

Symantec rose as much as 5.3 percent, the most since August, to $32.65 in New York. Just last week the company reported revenue forecasts for the current quarter that missed analysts’ estimates. It has been struggling with falling sales of its Norton antivirus to consumers.

Proofpoint Inc., rose as much as 8.9 percent to $87.32, its highest intraday price since November.

Microsoft Corp. President Brad Smith, in a blog post Sunday, said the attack is a “wake-up call” for governments around the world.

“This attack is a powerful reminder that information technology basics like keeping computers current and patched are a high responsibility for everyone, and it’s something every top executive should support.”

He said the attack “demonstrates the degree to which cybersecurity has become a shared responsibility between tech companies and customers.”