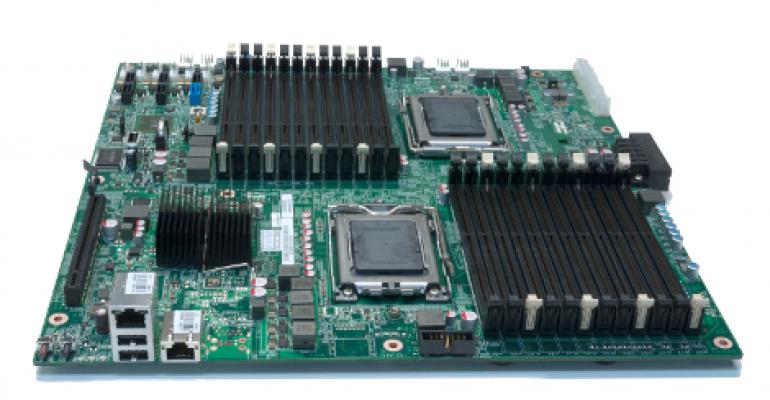 Spitfire server (AMD), open sourced in 2011: This is a variant of an OCP motherboard for AMD chips.
Business>Investing

Bu Ian King (Bloomberg) -- Advanced Micro Devices Inc.’s stock is on course for its worst one-day decline in more than a decade after its second-quarter forecast deflated hopes that a new range of chips will take sales from Intel Corp.

The stock fell as much as 21 percent, the biggest intraday drop since January 2005, reversing the run up it enjoyed this year. The company, which has spent months touting the ability of its new Zen design, reported sales that were in-line with analysts’ estimates and profitability that fell short of some projections.

The first versions of Zen, called Ryzen, were on sale for about a month in the first quarter. The report Monday didn’t provide enough proof the product will meet expectations that fueled the quadrupling of Advanced Micro Devices’ shares last year.

Revenue in the current quarter will increase 17 percent, plus or minus 3 percent, from $984 million reported in the first quarter, the Sunnyvale, California-based company said in a statement. That indicates sales of about $1.15 billion, compared with the average analyst estimate of $1.12 billion, according to data compiled by Bloomberg. Gross margin, or the percentage of sales remaining after deducting costs of production, will be 33 percent, Advanced Micro Devices said.

“While the company appears to be making progress with its new Ryzen product, first-quarter results clearly fell short of high expectations the stock was reflecting,” wrote Srini Pajjuri, an analyst at Macquarie Capital Inc. “The window of opportunity may be closing as Intel is expected to ship its own new products in the coming months.”

AMD is the second-largest maker of graphics processors used in add-in cards for gamer PCs, behind Nvidia Corp. It’s also in the process of rolling out new designs for that market.

Zen designs, branded Ryzen, went on sale in the first quarter for high-end desktop computers. Other models for laptops and servers will follow later this year.