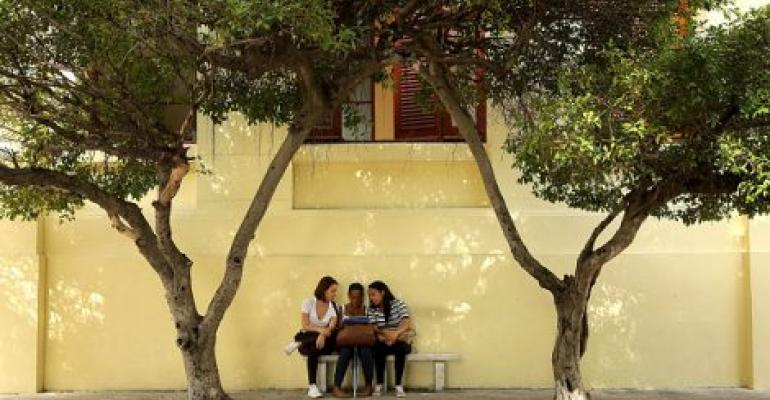 Students at Havana University look at a tablet under a spot of shade in Havana, Cuba. (Photo by Chip Somodevilla/Getty Images)
Business

Google this week started bringing online servers in Cuba that cache its content to improve performance for Cubans and reduce connectivity costs for the internet giant. It is the first internet company from overseas to extend its network’s edge to Cuba.

Here are all the essentials on this news:

Dyn Research, the research arm of the Oracle-owned DNS giant Dyn that tracks the internet’s health worldwide on a daily basis, noted the launch on Wednesday. Google confirmed that the servers had gone online this week in an email to The Verge.

Cubans can now access Google’s content, such as YouTube videos, faster because it is stored locally and doesn’t have to travel over a submarine cable from Venezuela.

“I think this will be very noticeable for Cubans. The internet in Cuba will still be a painfully slow process. This is just another somewhat rare step forward. For Google services, which will be hosted in country, it will be a milestone.”

It’s also usually cheaper for a content provider to store popular content locally, since it doesn’t have to pay for long-distance data transport. In other words, it’s cheaper for Google to store Gangnam Style in Cuba than paying to transport the video from somewhere on mainland South America every time somebody wants to see the most popular YouTube video of all time.

More on how this works here: How Edge Data Centers are Changing the Internet’s Geography

Google got to connect its servers to Cuba’s networks by making a deal with ETECSA, the island’s state-run ISP monopoly. It touted the deal in December, following a signing between Google chairman Eric Schmidt and ETECSA president executive Mayra Arevich, as reported by The Guardian.

It’s unlikely that Google actually built a data center in Cuba to do this. The company leases colocation space for its edge nodes, and its Cuba node is likely to be hosted in an ETECSA facility.

Google has more than 100 caching sites around the world, connected to the same global network as its 15 to 20 central data center hubs. The content cached on Google servers in Cuba likely originates at the company’s core data center in Quilicura, Chile, and makes several hops before it reaches the landing station in Venezuela.

As of Wednesday, Dyn’s Madory could not get a remote server in Cuba to connect to Google’s network via Google’s servers on the island, which means the new caching site is a work in progress:

“I can see the server is there and I can interact with it, but Cubans are not yet getting automatically connected to it.”

Far from it. Those on the island lucky enough to have regular internet access will see Google’s services perform faster, but the move will make zero to little difference for the majority of the population.

Home internet connections are illegal for most, but ETECSA has an ongoing pilot program meant to eventually connect 2,000 homes. Once the pilot is complete, the telco will switch to a paid service, which is expected to cost $15 to access the internet for 30 hours at 128 kbps, according to The Associated Press. Considering that an average Cuban makes $25 per month, it’s hard to expect a flood of new internet users to log on.

Most people in the country connect to the internet via public WiFi hotspots, paying $1.50 per hour.