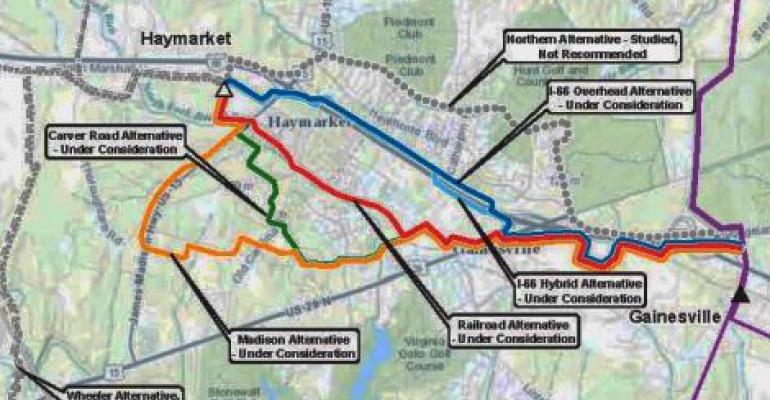 Map of proposed electric line routes for an expanded Amazon data center in Haymarket, Virginia, as drawn by Dominion Power in 2015.
Business>Regulation

New Power Line for Amazon May Run Above Railroads Despite Opposition

The Virginia State Corporation Commission cleared the way last Thursday for the state’s largest utility provider, Dominion Virginia Power, to seek the approval of local regulators to build a new electric substation, along with a 230 kV transmission line in a series of towers along an existing railroad line.  Both will serve, in the words of the Commission’s interim order, “a single retail customer,” whose identity is a secret to no one: Amazon.

In issuing the order, the Commission rejected the contention of opponents to the power line, including a citizens’ group entitled the Coalition to Protect Prince William County.  That group had been pushing for Dominion to adopt a plan to build the line partly along Interstate 66 and partly underground (shown in the map above in light blue).  And the power company had originally stated its preference for a completely overhead route along I-66 (the dark blue line running parallel in parts), the Commission acknowledged in its order.

But the Commission chose the railroad route (red line), citing construction costs about one-third those of the Coalition’s preferred alternative, and arguing the route would impact the town’s residents least of all.

“The Commission concludes that the Railroad Route ‘will reasonably minimize adverse impact on the scenic assets, historic districts and environment of the area concerned,’” the Interim Order reads, citing the language of state statute.  “While recognizing the adverse impacts of this route, including on wetlands and to the Town of Haymarket, the Commission finds that the Railroad Route will have significantly fewer impacts to local residents.”

The order goes on to claim the railroad route will have no impact of any kind upon residences within 200 feet of its center line, and only a small impact within 500 feet.

Of course, all this depends upon how one defines “impact.”  In a letter to the editor of the Richmond Times-Dispatch published last January, a resident of Gainesville wrote, “Originally, this seemed to be the ideal neighborhood to raise a family.  But if Dominion erects 112-foot-tall, 4-foot-wide towers along Carver Road, our promising futures will be destroyed.”

The Carver Road route (green line) was one of four alternate routes to Dominion’s originally preferred I-66 overhead route.  Last year, Carver became the preferred route of hearing examiner Glenn Richardson, who heard evidence from February to May of last year.  According to the Commission, Richardson recommended, “The Carver Road Route reasonably minimizes the Project's impact on the environment, scenic assets, and historic resources.”

But Prince William County’s assessment could not have been more contradictory.  In a letter to the Commission last December, Acting Planning Director Christopher Price presented a map clearly demonstrating the examiner’s preferred route plowed directly through a cemetery, and would probably have cast shadows upon Manassas National Battlefield Park.

In its order, the Commission stated it had concluded the Carver Road route had minimal impacts on the environment, agreeing with the examiner.  But it could not approve Carver, it said, due to an objection filed by a local homeowners’ association rendering any power line plan impossible without Prince William County’s consent.
“The County has indicated to the [power] Company,” the order reads, “that it will not permit an overhead transmission line to be constructed across its open space easement property interest as would be required for this routing alternative.”

As of last Thursday, Dominion was given 60 days to show to the Commission that it procured all the necessary rights-of-way, and that all legal constraints have been removed, to build along the railroad route.

While this could be phrased as the best chance at a compromise, Coalition director Elena Schlossberg issued a never-say-die statement on Friday, stating in part: “In repeating its demand for the Railroad alternative – an option neutralized by the Prince William Board of County Supervisors (BOCS) – then insisting Carver Road is the only fallback option, the SCC [State Corporation Commission] is explicitly playing politics, forcing the BOCS to make a decision the SCC lacks the will to make.”

One issue the Commission leaves outstanding is the somewhat important matter of who ends up paying for construction of the line and the power substation.  In fact, the order left it open explicitly, stating that in doing so, it “need not address the potential impact of economic development related to any direct assignment of such costs.”

All of this squabble is holding up Amazon’s plans announced in January 2015 to expand its Haymarket facilities, in the heavily competitive Richmond data center market, to about 500,000 square feet.