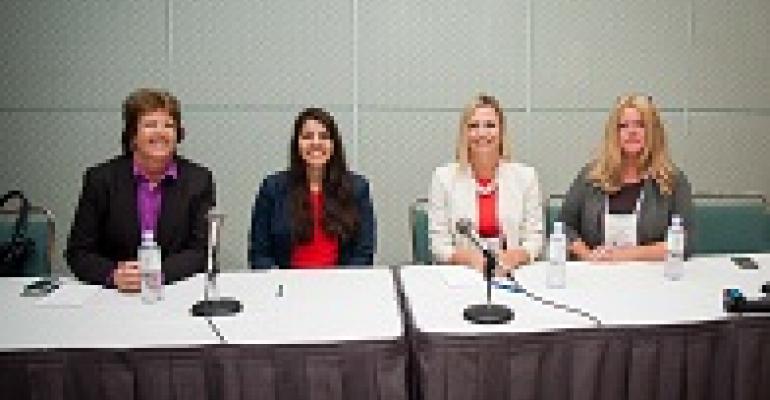 These Women Know Their Stuff

When girls enter junior high and high school, that's when they should be exposed to the possibility of working in the data center industry.

Attended almost equally by men and women, the four professionals on the"Women in the Data Center" panel at Data Center World made it clear that we must spread the word about STEM subjects and the opportunities in technology very early in life.

At young ages, we should introduce toys that challenge the brain in math and science so children can recognize their skills and talents. When girls enter junior high and high school, that's when they should be exposed to the possibility of working in the data center industry. If you have daughters, take them to work with you or Google "data center tours" and watch and explain what they're seeing to them. Encourage them to take classes simply to help them recognize potential passions.

Those were just some of the ideas the panelists had for increasing the number of women in data centers in the future. Below, you'll learn a little bit about each panelist and what advice she would give a woman just starting out in the industry and how to handle any gender biases they may encounter on the job.

On advice to a young women starting out in mission critical: When someone comes to you with an opportunity, which is unusual--you need to be looking for those opportunities yourself--don't box yourself in. Keep your mind open. There are a lot of things you can learn as you go. Don't pigeon-hole yourself into the positions or qualities you have right now.

On gender bias in the workplace: I don’t think it’s just exclusive to women. If there's one person that's giving you a hard time, then talk to his or her peers and find out what the problem is. Let them talk to the person giving you trouble so whoever it is gets quiet. You need to get your voice out there to let he or she know you are successful.  Make sure your voice is heard.

Ileana is part of the Data Center Engineering team for LinkedIn, focusing primarily on energy efficiency and operational cost saving measures. Prior to joining LinkedIn, she worked for a sustainability consulting firm and Amazon Web Services' data center teams.

On advice to a young women starting out in mission critical: It's important to find what your passion is. I learned that I was way more interested in sustainability measures than cabling or programming. It took me to be in a data center to figure it out. If you're really passionate about something, make sure you let people know what that is.

On gender bias in the workplace: I’ve been really lucky and never hit a wall based on my gender. When women show they can be successful, then it’s not a big deal. Just don’t be afraid to make mistakes; if you have a plan you can take those risks.

As vice president of business development, Cindy leads FORTRUST’s business development organization. She has more than 15 years of experience in technology and data center account management, with a strong background in healthcare and government markets.

On advice to a young women starting out in mission critical:  When someone comes to you with an opportunity, don’t box yourself in. Keep your mind open. There are a lot of things you can do and learn as you go. Don’t pigeon-hole yourself. Don’t be intimidated by what you don’t know yet. There's a lot of on-the-job-training in this industry. Even though I've been in data center world for a long time, I was on the enterprise side. Now, I'm in colocation, and it's totally different ecosystem. It took me six or seven months before I was clicking.

On gender bias in the workplace: I don’t think it’s unique to women. There are always going to be haters. Ignore them--it's like water off a duck’s back. Most people are supportive. If you're a team player, most will be a team player back. You can’t argue with results, so let your accomplishments speak for themselves. Those types of people are out there, but the good news is there are fewer of them. In most cases you can work around them.

Carrie  has been involved in the computing and networking industries for more than 30 years. Carrie currently works with Paige DataCom, a subsidiary of Paige Electric, as the global director of technology. This division is responsible for data communications and data center infrastructure.

On advice to a young women starting out in mission critical: Don't be afraid to ask questions. The only bad question is the one you don't ask. Don’t be afraid to try more things. Even if you fail, you’re going to learn something anyway. Don’t be afraid to toot your own horn. Make sure somebody takes notice because it could lead to a new opportunity.

On gender bias in the workplace: Sometimes the best answer is to find another job. You have to decide what level of complication you want in your life. If the person giving you a hard time  isn't going anywhere, then go somewhere else and get a job.