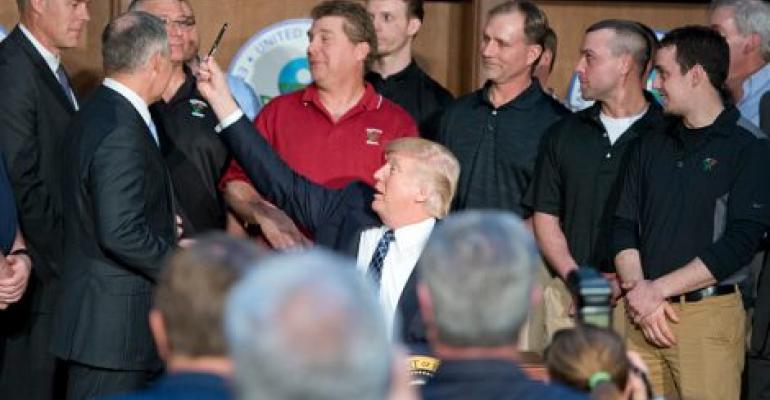 US President Donald Trump looks for US Secretary of the Interior Ryan Zinke after signing an Energy Independence Executive Order at the Environmental Protection Agency (EPA) Headquarters on March 28, 2017 in Washington, DC. The order reverses the Obama-era climate change policies. (Photo by Ron Sach-Pool/Getty Images)
Business

Will top colocation firms keep investing in renewable energy with a government that's hostile to it?

While several hyper-scale cloud giants have indicated they will stick to their renewable energy goals following last week’s executive order by President Donald Trump to start rolling back much of the Obama-era climate regulation, the biggest American data center providers, who also have made commitments to powering their facilities with renewable energy, have so far remained silent.

“The executive order will not have any influence on Microsoft's continued commitment to meet its existing renewable energy goals,” a Microsoft spokesperson said in an emailed statement.

Microsoft, Amazon, Apple, and Google issued a joint statement after Trump signed the executive order, saying they would continue pursuing their renewable energy goals and reiterating support for the Clean Power Plan, a set of utility regulations aimed at reducing carbon dioxide emissions from power plants put in place by the Obama administration.

Renewable energy is “affordable, reliable, and consistent with sound financial practices,” the statement by cloud giants read. “Our companies have all committed to ambitious long-term goals of running our operations using more renewable energy, and we remain committed to those targets.”

A spokesperson for Facebook, another American hyper-scale data center operator that’s made significant investment in renewable energy, declined to comment for this story.

The four companies that issued the statement are some of the largest data center users in the world. They spend billions of dollars every year on building, leasing, and operating data centers around the world. They are also customers of data center providers like Equinix and Digital Realty Trust.

US data centers consumed about 70 billion kilowatt-hours of electricity in 2014, the most recent year examined, representing 2 percent of the country’s total energy consumption, according to a study completed last year by the US Department of Energy.

While data center providers have for years abstained from making big investments in renewable energy, letting the hyper-scale platforms lead on powering their data centers with wind and solar energy, they recently changed their attitude and made some of the first large-scale power purchase agreements with wind and solar project developers.

A blog post summarizing the company's renewable energy efforts to date appeared on its website the same day Trump signed the executive order but did not mention the president's action. An Equinix spokesperson did not respond to a request for comment in time for publication

Update: Equinix sent us a statement after this article was published saying the company will continue pursuing its renewable energy goals:

"Our renewable energy commitments have not changed in light of the White House’s climate policy rollback.  We continue to have a long-term goal of using 100 percent clean and renewable energy for our global platform."

San Francisco-based Digital Realty last year contracted for enough wind power to cover its retail colocation footprint in the US. Digital is the world’s largest wholesale data center provider that is expanding in a big way its retail colocation and interconnection business, an effort that started with its $1.9 billion acquisition of colocation provider Telx in 2015.

A Digital Realty spokesperson did not respond to requests for comment.

Switch, a smaller Las Vegas-based provider known for its massive SuperNAP data center campuses in its hometown and several other locations, said it will continue pursuing its renewable energy goals. "Switch is steadfast in its commitment to continue using 100 percent renewable energy," Adam Kramer, the company's executive VP of strategy, said in an emailed statement.

Renewable energy has come down in price significantly in recent years, while demand for data center services powered by it has been rising.

Titled The Corporate Colocation and Cloud Buyers’ Principles, the document lists six things data center and cloud providers can do to help their enterprise customers meet their sustainability goals. They consist of offering cost-competitive services powered by renewable energy, regular reporting of data center energy and water consumption and greenhouse gas emissions, collaborating with customers on energy efficiency, working on incentives to reduce energy consumption, improving transparency, and advocating for policy in support of renewable energy.

A formalized process for data center providers to join as signatories of the principles is currently in the works, but several providers, including Equinix, have already voiced their support at least verbally, Kelly Gallo, a manager at BSR, said in an interview with Data Center Knowledge. They also include Switch, Aligned Energy, Green Mountain, and Infomart.

“It’s still pretty apparent that there’s a strong business case for renewable energy use [by data center operators], because of the cost in certain markets within the states,” Gallo said.

Clean Megawatts Not Easy to Buy

Data center operators will have to continue advocating for renewable energy, because their access to it will continue to depend on the availability of market mechanisms for its procurement, she added. Far from all states and utilities in the country have made it easy to make utility-scale renewable energy purchases, and data center operators often have to spend a lot of resources on protracted negotiations with utilities and regulators to secure these multi-megawatt contracts.

There’s incentive for utilities to listen. Data center operators are some of their favorite customers. They buy a lot of energy, and their power loads are consistent, which means fewer headaches associated with managing fluctuating loads to keep supply and demand on the grid in balance.

Because there are such strong business incentives for utilities to attract data centers to their territories, data center operators have a lot of leverage in negotiating with them -- leverage climate advocates have been calling on the tech giants to use in getting more renewable energy generation onto the grid.

“Utilities will want to listen to their customers,” Gallo said. At the end of the day, “who’s going to be paying the utility bill?”

And data center providers will probably want to listen to their customers too. It’s unclear why some of them have chosen to remain silent on the Trump administration’s push to roll back climate regulations. It could be because there’s still a lot of uncertainty about which rules the administration will actually be able to nullify. They could also simply be trying to avoid getting involved in a controversial, high-visibility political battle – behavior that is typical for data center providers but not for some of their biggest clients.