Google is the largest, most-used search engine in the world, with a global market share that has held steady at about 90 percent since Google Search launched in 1997 as Backrub. In 2017, Google became the most valuable brand in the world, topping Apple, according to the Brand Finance Global 500 report. Google’s position is due mainly to its core business as a search engine and its ability to transform users into payers via advertising.

About 32 percent of Google visitors come from the US, where the company holds 63.9 percent of the search engine market, according to statista.com. Google had 247 million unique US users in November 2015. Globally, it boasts 1.5 billion search engine users and more than 1 billion users of Gmail.

Work in the data center industry or simply curious about what the Internet is made of? Follow Data Center Knowledge on Twitter or Facebook,  join our LinkedIn Group, or subscribe to our RSS feed and daily e-mail updates.

In a reorganization in October 2015, Google became a subsidiary of a new company it created called Alphabet. Since then, several projects have been canceled or scaled back, including the halt of further rollout of Google Fiber. Following the reorg, however, Google has placed a lot of focus (and dedicated a lot of resources) to selling cloud services to enterprises, going head-to-head against the market giant Amazon Web Services and the second-largest player in the space, Microsoft Azure. 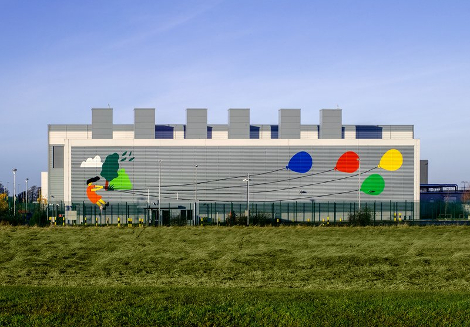 The largest of several murals illustrator Fuchsia MacAree painted on the walls of Google’s data center in Dublin (Photo: Google)

Here are some of the most frequently asked questions about Google data centers and our best stab at answering them:

Where are Google Data Centers Located?

Google lists eight data center locations in the U.S., one in South America, four in Europe and two in Asia. Its cloud sites, however, are expanding, and Google’s cloud map shows many points of presence worldwide. The company also has many caching sites in colocation facilities throughout the world, whose locations it does not share.

This far-flung network is necessary not only to support operations than run 24/7, but to meet specific regulations (like the EU’s privacy regulations) of certain regions and to ensure business continuity in the face of risks like natural disasters. 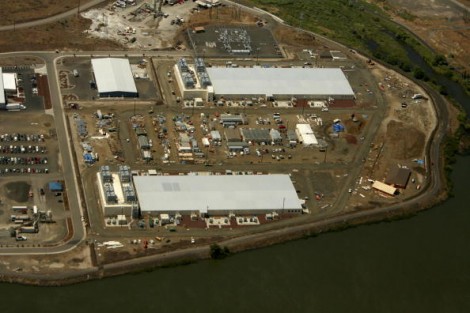 In the works as of March 2017, are Google data centers for cloud services in California, Canada, The Netherlands, Northern Virginia, São Paulo, London, Finland, Frankfurt, Mumbai, Singapore, and Sydney.

Here are the data center sites listed by Google:

How Big are Google Data Centers?

A paper presented during the IEEE 802.3bs Task Force in May 2014 estimates the size of five of Google’s US facilities as:

Many of these sites have multiple data center buildings, as Google prefers to build additional structures as sites expand rather than containing operations in a single massive building.

Google itself doesn’t disclose the size of its data centers. Instead, it mentions the cost of the sites or number of employees. Sometimes, facility size slips out. For example, the announcement about the opening of The Dalles in Oregon said the initial building was 164,000 square feet. The size of subsequent expansions, however, has been kept tightly under wraps.

Reports discussing Google’s new data center in Emeshaven, Netherlands, which opened December 2016, didn’t mention size. Instead, they said the company has contracted for the entire 62 Megawatt output of a nearby windfarm and ran 9,941 miles of computer cable within the facility. The data center employs 150 people.

How Many Servers Does Google Have?

There’s no official data on how many servers there are in Google data centers, but Gartner estimated in a July 2016 report that Google at the time had 2.5 million servers. This number, of course, is always changing as the company expands capacity and refreshes its hardware.